Harold B. Lee on The Millstone of “Liberal” Religion 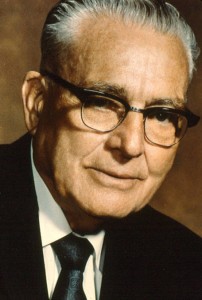 Harold B. Lee was President of the Quorum of the Twelve Apostles when he addressed the April, 1971 General Conference on the topic of “the Iron Rod.” (I note that the occasion for Elder Lee’s becoming an apostle in 1941 was the death of once-Senator and apostle Reed Smoot, and that, upon Lee’s death, L. Tom Perry, whom we just lost this last summer, was ordained an apostle.)

Pres. Lee was known for bold and incisive addresses, and this one certainly does not disappoint. Its relevance for us is obvious enough, so I will limit myself mainly to passing on a few trenchant quotations.

Drawing on a Wall Street Journal article by Rabbi Arthur Herlzterg, Pres. Lee holds up religion as the answer to man’s “metaphysical hunger,” without which we wander aimlessly, confused and empty. With this hunger to know “the nature of man, the meaning of life, the individual’s place in the universe” in mind, he presents Lehi’s vision of the tree of life. In this vision an iron rod leads the way to a tree whose supremely desirable fruits represents God’s love as manifest in the gift of his Son.

If there is any one thing most needed in this time of tumult and frustration, when men and women and youth and young adults are desperately seeking for answers to the problems which afflict mankind, it is an “iron rod” as a safe guide along the straight path on the way to eternal life, amidst the strange and devious roadways that would eventually lead to destruction and to the ruin of all that is “virtuous, lovely, or of good report.”

Pres. Lee shows that the conditions of our world were clearly foreseen by Book of Mormon prophets:

“… behold, ye do love money, and your substance, and your fine apparel, and the adorning of your churches, more than ye love the poor and the needy, the sick and the afflicted.” (Morm. 8:36–37.)

At this point, Pres. Lee’s preaching becomes quite pointed and specific:

There are many who profess to be religious and speak of themselves as Christians, and, according to one such, “as accepting the scriptures only as sources of inspiration and moral truth,” and then ask in their smugness: “Do the revelations of God give us a handrail to the kingdom of God, as the Lord’s messenger told Lehi, or merely a compass?”

The handrail/compass image clearly targets the notion introduced in a Dialogue article a few years earlier of a distinction between “iron rod” and “Liahona” Mormons, the latter clearly favored by the author as more broad-minded and intellectually alert. Pres. Lee is clearly not favorably impressed by this attempt to carve out a special, more sophisticated category of Mormon, even comparing those who claim the status of Liahona Mormons to the denizens of the Great and Spacious Building:

Unfortunately, some are among us who claim to be Church members but are somewhat like the scoffers in Lehi’s vision—standing aloof and seemingly inclined to hold in derision the faithful who choose to accept Church authorities as God’s special witnesses of the gospel and his agents in directing the affairs of the Church.

And Pres. hadn’t finished. Drawing on quotations from John A. Widtsoe, former Apostle, he targets those who define themselves as “liberal” Mormons:

“The self-called liberal [in the Church] is usually one who has broken with the fundamental principles or guiding philosophy of the group to which he belongs. … He claims membership in an organization but does not believe in its basic concepts; and sets out to reform it by changing its foundations. …

“It is folly to speak of a liberal religion, if that religion claims that it rests upon unchanging truth.”

And then Dr. Widtsoe concludes his statement with this: “It is well to beware of people who go about proclaiming that they are or their churches are liberal. The probabilities are that the structure of their faith is built on sand and will not withstand the storms of truth.” (“Evidences and Reconciliations,” Improvement Era, vol. 44 [1941], p. 609.)

Pres. Lee makes it clear that it is not learning that is the problem, but rather the pride by which the learned strive to distinguish themselves from “ordinary” members, thus causing many to go astray:

Wouldn’t it be a great thing if all who are well schooled in secular learning could hold fast to the “iron rod,” or the word of God, which could lead them, through faith, to an understanding, rather than to have them stray away into strange paths of man-made theories and be plunged into the murky waters of disbelief and apostasy? …

The Lord issued a warning to those who would seek to destroy the faith of an individual or lead him away from the word of God or cause him to lose his grasp on the “iron rod,” wherein was safety by faith in a Divine Redeemer and his purposes concerning this earth and its peoples.

The Master warned: “But whoso shall offend one of these little ones which believe in me, it were better … that a millstone were hanged about his neck, and that he were drowned in the depth of the sea.” (Matt. 18:6.)

Many will no doubt find Pres. Lee’s admonitions and warnings offensive today, as surely many did in 1971. But before taking offense, it might be wise for us intellectuals to consider the effects of our intellectual ambitions on those “little ones,” and the weight of that millstone.

Just one further note: there is an interesting difference of emphasis in this conference concerning the status of learning by study, by our own intellectual efforts.

Elder McConkie (“The Lord’s People Receive Revelation”) insists on the priority, even the sufficiency, of faith and revelation, known from experience and feeling rather than through intellectual insight.

True religion deals with spiritual things. We do not come to a knowledge of God and his laws through intellectuality, or by research, or by reason. I have an average mind—one that is neither better nor worse than the general run of mankind. In the realm of intellectual attainment I have a doctor’s degree, and I hope my sons after me will reach a similar goal. In their sphere, education and intellectuality are devoutly to be desired.

But when contrasted with spiritual endowments, they are of but slight and passing worth. From an eternal perspective what each of us needs is a Ph.D. in faith and righteousness. The things that will profit us everlastingly are not the power to reason, but the ability to receive revelation; not the truths learned by study, but the knowledge gained by faith; not what we know about the things of the world, but our knowledge of God and his laws.

Pres. Lee, on the other hand, after his warnings against liberal or Liahona Mormonism, actually gives a very significant place to intellectual study in the development of spiritual insight:

Let no one think that “learning by faith” contemplates an easy or lazy way to gain knowledge and ripen it into wisdom.

From heavenly instructions and added to which are the experiences of almost anyone who has sought diligently for heavenly guidance, one may readily understand that learning by faith requires the bending of the whole soul through worthy living to become attuned to the Holy Spirit of the Lord, the calling up from the depths of one’s own mental searching, and the linking of our own efforts to receive the true witness of the Spirit.

The mission of this church is to bear witness of the truths of the gospel and put to flight the false teachings on every side that are causing the restlessness and the aimlessness that threaten all who have not found the straight path and that which could be an anchor to their souls.

My fervent prayer is that I may hold up that true Light of Christ to all the world. I would that all may know with assurance, as I, from study, prayer, and faith, know for a certainty, as the Master declared to Martha, who was mourning the death of Lazarus, that the Lord and Master is indeed “the resurrection, and the life; [and] he that believeth in [him], though he were dead, yet shall he live:

To this I do bear my solemn witness, in the sacred name of our Lord and Master, Jesus Christ, even so. Amen.

December 24, 2015
Inside Dope on Emerging Mormon Pro-Homosexuality Stance
Next Post

January 4, 2016 Paradox is not Contradiction, but Wealth of Meaning
Recent Comments
0 | Leave a Comment
Browse Our Archives
Related posts from The Soul and the City