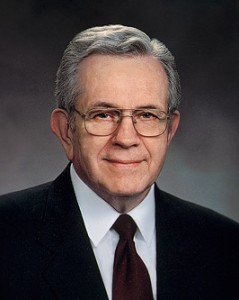 Is knowledge of ultimate truth possible? We have of late heard critics of the Church of Jesus Christ of Latter-day Saints from both right and left declare or insinuate that Church leaders have no particular spiritual warrant for their authority but are merely good organization men giving the masses what they seem to need, bolstering inherited and conventional beliefs without claiming any real revelation, any definite access to a higher truth. Sure, the prophets testify, repeating the same old formulae, but the good old days of heavenly manifestations are either a thing of the past (right) or they were always delusions (left).

Elder Boyd K. Packer was already aware 45 years ago of a tendency to look beyond the mark of pure testimony. Addressing the April General Conference just one year after accepting the call to the apostleship, Elder Packer notes the complaints of some who are looking for something more than the simple testimonies they commonly hear:

There are those who hear testimonies borne in the Church, by those in high station and by members in the wards and branches, all using the same words—“I know that God lives; I know that Jesus is the Christ,” and come to question, “Why cannot it be said in plainer words? Why aren’t they more explicit and more descriptive? Cannot the apostles say more?”

What more would such listeners like to here? “Occasionally during the past year,” Elder Packer observes, “I have been asked a question. Usually it comes as a curious, almost an idle, question about the qualifications to stand as a witness for Christ. The question they ask is, ‘Have you seen Him?’”

Is the witness of Church authorities based on definite, miraculous manifestations? Elder Packer candidly addresses some member’s “idle curiosity,” or their interest in some declaration beyond simple testimony. He has not asked his Brethren what or whom they have seen, and he does not intend to: “one would have to have some special inspiration, indeed, some authorization, even to ask it.” But he has in fact heard them answer the question — not, however, when they were asked, but only “under the prompting of the Spirit, on sacred occasions, when ‘the Spirit beareth record.’”

I have heard one of my brethren declare: “I know from experiences, too sacred to relate, that Jesus is the Christ.”

I have heard another testify: “I know that God lives; I know that the Lord lives. And more than that, I know the Lord.”

Well, that’s pretty direct, isn’t it? But why not just tell us all about these “sacred… experiences”? Why not publish them in broad daylight? “There are some things just too sacred to discuss,” Elder Packer explains; such things are “not to be discussed, but to be harbored and to be protected and regarded with the deepest reverence.” He cites the prophet Alma to explain that spiritual truths are not to be paraded before an unqualified public:

“… It is given unto many to know the mysteries of God; nevertheless they are laid under a strict command that they shall not impart only according to the portion of his word which he doth grant unto the children of men, according to the heed and diligence which they give unto him.

According, then, to Elder Packer, and to Alma, we are indeed promised the opportunity to “know the mysteries of God … in full,” but such sacred knowledge is only imparted on condition of “heed and diligence.”

This is a very different model of knowledge from the world’s prevailing understanding. On the rationalistic or secular model, we demand knowledge on our own terms, reserving the right to use it however we like, according to our own advantage, vanity or lust. I have read some ostensible truth-seekers state that, if God, or someone, will supply irrefutable proof of revelation, then they might consider conforming to it – as if they would be doing God a favor by considering the option of obedience. This seems to me the very definition of hardness of heart. Openness to divine Truth, the opposite disposition to hardness of heart, consists, I would say, precisely in a prior disposition, an advance readiness to sacrifice everything, if needed, to secure the pearl of great price. The only alternative to hardness of heart that seeks to have Truth on its own terms is the sacrifice of a broken heart and a contrite spirit.

The question “how can I know?” presupposes the question “what does it mean to know?” Secular, “rational” knowledge frames the object of knowledge in advance as a means to my own ends, an instrument in the service of my own aggrandizement. “To know,” according to our current rationalism, means, “to make fully transparent and available for my use.” This instrumental and willful understanding of knowledge was knowingly promoted by founders of the modern technological understanding of science such as Francis Bacon and Rene Descartes; both contributed much to the modern transformation of knowledge from the classical pursuit of a higher, normative truth to the project of the “mastery of nature” for the material relief of the human condition.

Of course we have benefited massively from this technological transformation of the very meaning of “to know.” But the very material success of this new approach to knowing has caused us to forget another kind of knowing, a sacred knowledge that promises access to “mysteries of God” – but only if we show that we can accept the truth on the terms of God’s love, and not with a view to our own projects.

Marriage is a sacred relationship entered into primarily for the rearing of a family, in fulfillment of the commandments of the Lord. …

Divorce is usually the result of one or both not living the gospel. I suppose this is the same reason divorce was finally permitted in the time of Moses, as referred to by the Savior as he answered the Pharisees, when he said: “Moses because of the hardness of your hearts suffered you to put away your wives: but from the beginning it was not so.” (Matt. 19:8.) And so in our day members do not abide by the law of the gospel in its fullness, and, as in the day of Moses, divorce is permitted, when deemed necessary, although it was never intended to be. …

President McKay said, in reference to the seriousness with which we enter the marriage contract: “… to look upon marriage as a mere contract that may be entered into at pleasure in response to a romantic whim, or for selfish purposes, and severed at the first difficulty or misunderstanding that may arise, is an evil meriting severe condemnation, especially in cases wherein children are made to suffer because of such separation.” (Quoted in Blaine R. Porter, The Latter-day Saint Family [Deseret Book Co., 1966], pp. 402–403.)

Other thoughts on the same General Conference session

January 4, 2016
Paradox is not Contradiction, but Wealth of Meaning
Next Post

January 12, 2016 A People Blessed by Revelation
Recent Comments
0 | Leave a Comment
Browse Our Archives
get the latest from
Latter-day Saint
Sign up for our newsletter
Related posts from The Soul and the City