My Conscientious Objection to the Culture War

My Conscientious Objection to the Culture War June 13, 2016 Mary Pezzulo

Wouldn’t Christ expect me to love them with all my heart, try to meet their temporal needs when I could, offer intercession for them and bear persecution meekly? In that sense, what difference does it make, whether any given group of Muslims is at war with me?

And I apply this to everyone, every group of people I’ve met. I was raised to believe that homosexuals were degenerates with no self-control who unleashed the HIV epidemic on the world by raping chimpanzees. The ones I’ve met have been human beings, like me in some ways and unlike me in others. I am not at war with my gay friends. I don’t believe they have an “agenda” to drag me away from my faith. They do some things among themselves that are against my faith, and they do plenty of things that I can agree with at other times. Just like the Muslims I’ve known. Just like the pro-choice people, whom I deeply disagree with on abortion but with whom I agree on other things. Just like Protestants, for that matter. Evangelical Protestants believe all kinds of things that are against Catholicism, yet somehow I find that they’re treated as allies in the Culture War and our differences are overlooked. But if you act as though you overlook the differences between Catholics and the LGBTQ community, or Muslims, or pro-choice people, for any reason, you’ll get called a traitor in the culture war.

And what if gay people or Protestants or pro-choice people all ripped off their masks and revealed themselves to be at war with me? What if they persecuted me? Christ would require me to bear the persecution meekly, to forgive them from my heart, to intercede for them and love them just the same.

So, what does it matter if it turns out we’re at war?

The Church requires that we only go to war if we’re absolutely certain that the results of doing so would be less hideous than the results of staying out. I don’t see that that’s ever been the case with the culture war. The culture war has left me artificially siding with people who disagree with me, against others who disagree with me, for the purpose of protecting myself from someone who isn’t hurting me and with the result of looking like an idiot. Because of the culture war, I was fed a healthy helping of lies with my Catechism and turned into a bigot, which is something I’m still repenting from.

From this day forward, I am choosing to be a conscientious objector to the Culture War. I am not in a war against people who disagree with this or that aspect of my faith. I am the worst of sinners, following a God Who loves me and gave Himself for me while I was still a sinner. I choose to love my neighbor as myself, because God requires that of me and because they deserve to be loved. I’m terrible at it, so I apologize in advance, but that is my goal. I choose not to do certain things because my Faith tells me that they are wrong. I don’t think that people who do those things are degenerates, I think they’re human beings, Children of God, who are doing something wrong. I choose to repent and to ask pardon for my own sins, and to stop obsessing over the sins of my brother unless they somehow actually do become my business. I’m terrible at this, but it’s what I choose.

I choose to follow the Gospel, and the path modeled for me by Christ, rather than the path of the Culture War. 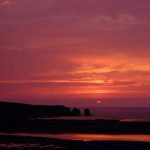 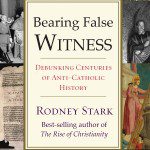 June 14, 2016 Only On the Testimony of Two or Three Witnesses: A Review of Rodney Stark's Bearing False Witness
Recent Comments
0 | Leave a Comment
Browse Our Archives
Follow Us!