Would Angels Envy Us? 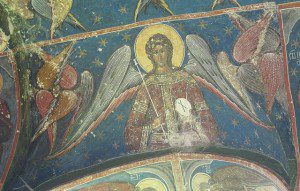 I have, in my bedroom, a beat up old icon of Saint Michael the Archangel. It didn’t used to be so beat up, but I ruined it by sticking it under my pillow during a summer-long bout with insomnia and nightmares. My insomnia is mostly healed, but all the gold leaf wore off onto my sheets and the tempera is dented up. Still, I like that icon. Sometimes I lay my head against its battered surface and complain for fifteen minutes or half an hour, telling my big brother Archangel Michael all of my woes, which are legion as most humans’ woes are.

When my chronic illness is acting up, I sometimes inform Archangel Michael that he doesn’t know how easy he has it, not having a body. And then I get more discouraged, and wonder how it’s possible that a being with no body could empathize with bodily pain; or worse, if a being so perfect and brilliant isn’t staring down his nose at me, wondering why I don’t buck up and carry my cross with a little more valiance and honor, the way he would carry it if he bore a cross.

I often think about that adage, “If angels could envy, they would envy us for suffering.” Apparently Saint Faustina said something similar but different in her diary, and it was turned into a Hallmark card phrase. Now all Catholics of a certain age use it; they tend to waggle it at ill or disabled folks when we complain.  They’re trying to say that we shouldn’t despair, because suffering is infinitely valuable in the end, and they’re right. But it sounds like they’re saying we should be happy to be miserable, as if we were Oscar the Grouch. Too many times to count I have heard or thought of that saying, tried to apply it to my own life, struggled to feel thankful for my cross, and failed. Too many times I’ve wondered if all nine choirs of angels are upstairs, bodiless but bending down, frowns on their non-faces, shaking their non-heads and clucking their non-tongues at my bungling inability to appreciate my cross.

It wasn’t until earlier this afternoon, when I happened to be complaining with my head leaned against the battered Archangel Michael icon, that I realized that the saying is more than a little bit ludicrous.

“If angels could envy, they would envy our suffering,” is the sort of thought experiment that always mystifies me. It reminds me of the time that a school textbook’s “fun facts” section claimed, “If you could find a bathtub big enough, Saturn would float!”

No, it wouldn’t. I knew that when I was eight years old, and I know it even better now. If you could find a bathtub massive enough to float Saturn on its titanic waters, the bathtub wouldn’t be a bathtub. It would form itself into a ball, as gravity causes all planet-sized objects in space to do, and the waters would sit on the top, an endless sea on a smooth white porcelain giant quite a bit larger than Jupiter, but smaller than the sun. Saturn wouldn’t float in that. It might orbit it like a moon, causing tides in the Bathwater Sea. Perhaps patches of dry glazed ceramic would come forth above the waters when Saturn tugged them at predictable times of day. Perhaps life, very dense life much larger than our earth’s, would flourish there. Perhaps there would be a nation of animate soap bubbles and rubber ducks, any one of them as big as an earthly mountain, with its own culture, myths and history, billions of miles away. But then again, if it were close enough to Saturn to draw it into its orbit, all that bathwater would be far too cold for bubbles.

Other than that, though, if you could find a bathtub big enough, Saturn would float. I think all astronomers agree on that.

“If angels could envy, they would envy us for suffering” seems equally outlandish, to a point. 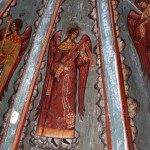 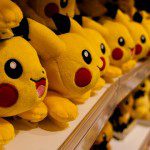