The Glory-Cloud is Always There: A Meditation on the Transfiguration 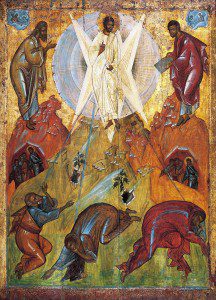 The Transfiguration icon was on display at church today; I’d never seen a Transfiguration icon before. I didn’t have much time to gaze, but the same icon was printed on our church bulletin, so I looked at it there as well. Here’s a copy of it that was public domain; it portrays the same thing in the same way. Look at it with me.

There’s Jesus, clothes white as light, surrounded by the Glory-Cloud– the Glory-Cloud is always there, of course. It was there when He declared that there should be physical light; it was there days later, when the sun and moon were made. The Glory-Cloud was there when He walked through the garden in the cool of the day, when Man first hid from its light. It was there when He spoke to the patriarchs; it still surrounded Him when He humbled Himself and entered the Virgin. It was there in the cave of the Nativity when He lay on straw. It was in Egypt with Him in exile; of course, it was in the Temple when he stayed for three days, without His mother knowing. It will be with Him as He enters Jerusalem triumphant to cries of “Hosanna!” It will be with Him on the cross, but we won’t see it then; the whole world will go black when He breathes His last. It will be there again at the Ressurrection. The soldiers will faint at the sight. It will be there when He comes again, and we will see it clearly. But usually, here on earth, we don’t.

Elijah and Moses are with Him, conversing. Elijah is a frizzy-haired desert prophet, representing all prophets, and Moses holds the tablet of the Law. The Law and the Prophets, with Christ in the middle to complete them.

Peter, James and John saw the Glory-Cloud that day; there they are at the bottom of the icon, comic relief. Not one of them can stay upright. James and John are holding their faces as if they’re going to be sick. At first I wondered at this, that the Glory-Cloud from which we hid when we first tasted the poisoned fruit, could make us sick. Perhaps it could make us cough it up, spit out the bit of apple rind like Snow White and rise up alive again when we had once been dead. Perhaps that’s why the ancient Hebrews thought they’d drop dead if they saw the Glory of the Lord. Perhaps it wasn’t time to for the fruit to come back up yet, so we could be filled with other food. The Bread of Life was not on earth, then. We could only chew on the Law that goes sour in our stomachs. Now here are James and John coughing it up.

After awhile, I realized that James and John are not really vomiting; they’re visually representing that they are dumbstruck. They’re too awed to speak. Only Peter can speak, but he doesn’t have much to say. Nothing, compared to the great Truth that God the Father revealed. Still, Peter’s got to talk. There’s one like him at every mountaintop experience.  “Lord, it is good that we are here. If you wish, I will make three tents here, one for you and one for Moses and one for Elijah.” 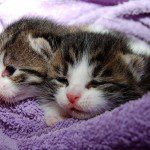 August 8, 2016 Struggle to Perfect Your Loves, Do Not Struggle Against Them
Recent Comments
0 | Leave a Comment
Browse Our Archives
Follow Us! 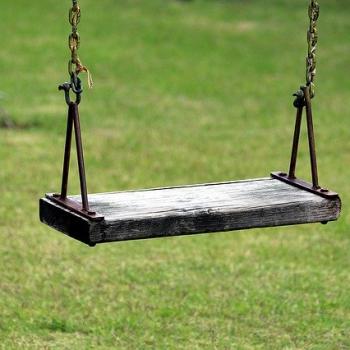 Catholic
On the Feast of the Holy Innocents
Steel Magnificat 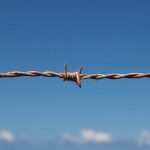 Catholic
Christ the Refugee and Other Things that Shouldn't...
Steel Magnificat
TRENDING AT PATHEOS Catholic 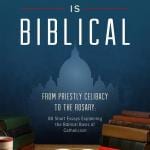 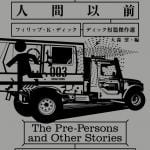