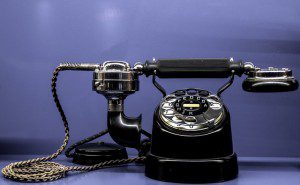 There is a Protestant church near my house, whose kiosk boasts “explosive services” and a choir known as the “Gospel Glamor Girls.”  The explosive services happen during Sunday’s Divine Liturgy time, or else I think I would sneak out and attend one of them– there’s something very holy and wholesome about a modest brick Protestant church in the middle of a very poor neighborhood in Northern Appalachia. I like to go on my walks down that street in the evenings, and see the abstract colors of the stained glass windows shimmering from the inside.

I even liked their robot calls, at first.

Somehow, that church got ahold of my phone number and decided I was one of their regular churchgoers. It started with automatic phone calls on Tuesday and Saturday afternoons, to remind me of the times for Sunday and Wednesday Night worship service. The phone would ring, the baby would wake up from her nap, I’d stumble across my apartment desperately trying to find the phone and turn it off, and it would be the good pastor himself on a pre-recorded call, reminding me of worship times and of the importance of showing up so that God might accomplish His work in me. I always listened to the whole thing through, after quieting the baby. The pastor gave the whole message in that unique African-American Pentecostal staccato, halfway between speaking and chanting, a different brand new mini-sermon every time. There was always a Bible verse. There was always an exhortation to show up so that God might bless me– and if you take that as an exhortation to come out to the desert so that God might speak, instead of to do the right things so that God might dump material blessings in your lap, I think it’s a fine exhortation. When he finished with “And may God bless you,” I crossed myself and bowed my head. It was a nice little bi-weekly visitation. If only he’d called when the baby wasn’t napping.

Then the texts started coming in, several times a week. They were only a few sentences, and not as interesting, but I read them. If I didn’t read them, my cheap old phone would beep at me once every fifteen minutes until I did, and I couldn’t figure out how to disable that feature, so I didn’t have a choice. At one point the pastor texted me that “Jesus when to church every Sunday as his custom. Let’s all do the same!” which is the strangest interpretation of the Jewish observation of Shabbat that I’ve ever heard. It began to get a little taxing for this desperately nervous introvert to go back and forth to the phone, receiving texts and calls from a pastor I didn’t know and a church I didn’t attend at least four times a week. Once, I fought off my introversion for long enough to call back the number, to try to tell them to stop calling me, but all it did was connect me to an answering machine that didn’t take messages but simply repeated the pastoral exhortation to show up.

Then the Sunday Morning calls began.

My daughter is one of those late-rising babies; she has been ever since she was six months old. Her natural sleep cycle is from midnight to ten on a good day– some nights, she can happily stay up til two. I would pace the floor with her in my tiny little apartment, begging her to go to sleep, cringing when our substance-abusing upstairs neighbor pounded the ceiling for quiet; I would collapse into bed at last at two AM on Saturday night, longing for sleep. Then, often enough, I’d be up again at five when the neighbor drunkenly performed a guitar and singing concert or cursed out her latest boyfriend. When she finally quieted, it would be close to dawn, and I would be on the verge of hysterics. My husband would soothe me with the reminder that there was a four o’clock Sunday Mass on campus, and we could just go there. I would drift off to sleep.

At seven o’clock on Sunday, the phone would ring. 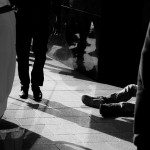 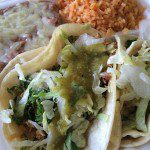 September 2, 2016 The Children of God and the Taco Truck Connundrum
Recent Comments
0 | Leave a Comment
Browse Our Archives
Follow Us!