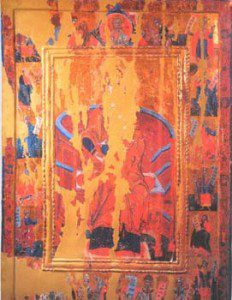 (Severely damaged icon of the Theotokos, courtesy of Wikimedia Commons)

Somehow, I missed the news that Brock Turner was from Ohio.

I didn’t know until this week that he was moving back to Ohio. A news site showed me the sex offender registry with his name and address, and I clicked on it without thinking. It was a town I’ve been to, but not right here, thankfully. There are already enough rapists in the Steel Valley. There are a couple in my neighborhood, down on the next block where the street lights are burnt out. My own rapist lives a few towns over, in Martin’s Ferry, with a family and children.

I googled the address. I don’t know why I did that– morbid curiosity always gets the better of me. I clicked the satellite image and squinted at the blurry photo of a roof. It’s just an ordinary upper-class McMansion, one of many, on a spastic squiggle of a street in the middle of a wealthy suburban development. The kind of place where people can have every luxury they want, unless what they want isn’t kitsch. True luxury that isn’t kitsch is reserved for the richer still, the astonishingly wealthy whose sons would not go to trial at all for rape– not for the Suburban-McMansion Rich whose sons serve three months if the press is bad enough.

I watched the video of Brock going into the police station, to register as a sex offender. His mother was there, if anything more shocking than he. I’ve gotten used to Brock’s face. His grinning portrait and sullen mug shot leer at me every time I read the news, lately; his hateful pampered countenance has become the stock image for every statement about how lenient our justice system is toward athletes who rape, and justly so. The story of what he did, his lack of remorse and the light sentence he received ought to be infamous; we should all know that face and that name. But I’d never seen his mother before.

There she was, not dressed like I’d imagine a rich woman dressing to go the police station. I’d envisioned a tasteful-looking rich woman in a pastel skirt set with a strand of pearls. This woman was wearing jeans– fashionably tailored expensive jeans, no doubt– and that ubiquitous loose-knit white Mom Cardigan. Every mother in America must have a white cardigan like that one. you can get them at any thrift store, though I’m sure she bought hers new.

What did she do with the cardigan? She used it to block news cameras. She held up both sides of it like bleached bat wings, covering as much of the camera as she could, and failing pretty badly at it. I found myself on the verge of laughter at how terribly she managed. She looked as though she were calmly flashing her monster of a son, spurring him on to more sexually perverted acts right in the middle of the police station. And her effort was useless in any case; we all know her son’s face, and now we know what she looks like. She is, like him, without remorse; like him, she’s rich, pampered, kitschy and lacking even the most frivolous aesthetic benefits of wealth. They are a textbook, living illustration of the banality of evil– the drab, mealy, boring and oafish ordinariness of evil. And they’ve gotten away with it.

I wish I hadn’t watched that video.

I wish I didn’t know that these people lived in my state.

I wish I didn’t know they lived, at all; I wish I’d never heard the name of Brock Turner.

What am I supposed to do with this knowledge?

What does the Christian do, when we know that people like this exist? 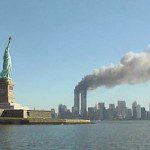