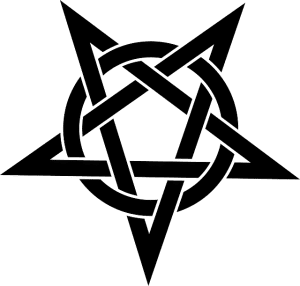 It’s very important to have friends who will help you fill in the parts of your education you’ve missed by being raised on the Planet Charismatic. I know I’m grateful to mine.

This morning, I started to get a very small fit of the scruples. Most people raised in spiritually abusive homes are subject to this sort of thing. I start every morning on edge at the best of times, and the past eight days haven’t been good for anybody’s equilibrium.  As I went to read the news, I kept seeing photos of TV’s Donald Trump posing in front of what looked like a pentagram in brass-plated bas relief on a dark blue wall. There was an eagle on top of the pentagram; in some photos, Donald stood directly in front of the eagle, and looked as though his head had sprouted brass wings.

And I started to get nervous.

You have to understand my terror of pentagrams. I don’t know the first thing about them except that they’re on the long list of things that terrified people in my insane Charismatic prayer group growing up. My mother stopped allowing us to check Bedknobs and Broomsticks out of the library, when we joined the “Community.” We tried to walk on the opposite side of the street, when we passed stores that sold Dungeons and Dragons. We weren’t allowed to read books with vampires in them. The creepy Charismatic church ladies railed against Halloween parties and the Goosebumps series.  Such things were of the devil. They would cause you to come down with a demonic oppression, if not a full-blown possession, and then you’d have to be prayed over by the creepy ladies with their vials of oil.
Once, my mother walked into the room where my brothers were watching an episode of the late 90s series Where in Time is Carmen Sandiego? and ominously declared, “You can’t tell me this isn’t demonic.”
This is the background I lived in for several years, relaxing gradually in my teens until we were almost normal. Certain emblems were “pagan” and symbols of “witchcraft,” and among them were the upside-down cross, the ankh, the peace sign, and certainly the pentagram.
I went ahead and asked my friends on Facebook. “Okay, dumb question. Where is that dark blue corner where Trump apparently goes to sign his documents? It’s not the Oval Office. The Oval Office has windows behind the desk. This one has a pentagram and a golden eagle in the back so it makes Trump look like he has a winged scalp. What is that place?”
A flurry of searching began. No, it wasn’t any part of the Oval Office. The Oval Office is cream and yellow. No, it wasn’t the Blue Room; the Blue Room’s walls don’t look like that.
Finally, a friend realized it was not in the White House at all, but the Pentagon. She zoomed in on the mystery symbol.
I had to come out and admit what was bothering me. “Why is the star upside down, the symbol of black magic?”
A theologian friend answered instantly. “Because some people tried to make it look like a goat’s head, but really, it has positive values in Christian history like the five wounds of Christ.”
Oh.
My friend who reads a lot of Tolkien got on next. “Hell, Sir Gawain had a pentagram on his shield. Because

“First, he was found faultless in his five senses,

and his five fingers never failed him in any deed,
and all his faith in this world was in the five wounds
that Christ carried on the cross, as the Creed informs us.
No matter where he moved in melee or in battle
it was his fervent thought through thick or thin
that when he fought his courage came from the five joys
the high Queen of Heaven had of her child.
(And so the noble knight would never wear his shield
till her image had been painted on the inner half;
for when he saw her face his courage never failed.)
And a fifth five was found in Gawain:
bounty and brotherhood above all else;
courtesy and a clean heart (these were never crooked)
and the finest point, compassion — these five virtues
marked him more than any man alive.
Now all these five fives were fastened round this knight
and each embraced the others in unbroken pattern
and met in five fixed points that never failed,
nor bunched together, nor split in pieces,
but ran on endlessly at every point —
where the figure failed, it found new beginnings.
Therefore the shield shone with the knot thus shaped,
gold royally arranged against red gules —
the noble pentacle as it is known by men
of lore.

Now ready to go his way,
he lifted his lance as if for war,
gave them all good day —
and left them there forevermore.”

Oh.
Finally, another friend had the answer: “That’s the Congressional Medal of Honor, our nation’s highest military award. Most people awarded it are dead. Sacrificed their lives to save others. It’s an insult to every person awarded the MOH that he uses it as a backdrop.”
Oh.
The Congressional Medal of Honor was one of those things my pious home school never mentioned, along with the civil-rights movement; they were too busy having us memorize the Saint Joseph Baltimore Catechism and read protestant science texts about how the Grand Canyon was caused by the flood of Noah. I had to look it up.
The symbol on the wall of the Pentagon has the head of Minerva, the goddess of wisdom and also of war, which replaces and symbolizes a larger scene depicting “Minerva repulsing discord,” inside of the five-pointed star. The upside-down star has been a sign of military excellence since at least the Middle Ages. The little fluted edges of the star represent the oak, which is a symbol of strength. It’s topped with an eagle because America.
I’m not saying it’s 100% NOT pagan, but not at all in the way I thought.
So, I want to assure any scrupulous people like me that Donald Trump is not betraying every positive value our country stands for while standing in front of a symbol of black magic. Rest easy. He’s betraying every positive value our country stands for, while standing in front of a Congressional Medal of Honor and sometimes posing for the camera with the eagle wings looking like a hat.
Glad we cleared that up.
(image via Pixabay) 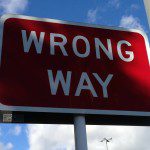 January 30, 2017 Chaldean Patriarch Denounces Preference for Christian Refugees
Recent Comments
0 | Leave a Comment
"I was actually kind of annoyed when I got married, in the Catholic church with ..."
Mary Suppose You Thought You Were A ..."
"Strictly speaking, they are allowed to solemnize the wedding, not do the legal bit. Its ..."
Ben in Oakland Suppose You Thought You Were A ..."
"Oh, I know that signing the marriage contract is what makes the marriage, but priests ..."
Joanne Lindstrand Suppose You Thought You Were A ..."
"An interesting, and no doubt accurate, perspective on the actual lives of those classified by ..."
alwayspuzzled The Puzzle of Saint Francis and ..."
Browse Our Archives
get the latest from
Steel Magnificat
Sign up for our newsletter
POPULAR AT PATHEOS Catholic
1