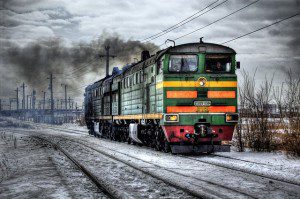 Author’s note: One day in foggy, rainy winter, here in the Ohio Valley, I was walking through my neighborhood on a poor street. I saw some houses standing and occupied, some houses abandoned, and some that had been torn down and were nothing but piles of splinters.

“It looks like a bomb went off here,” I said.

And I decided to bomb it, as writers do, in a story.

The Winter came at the end of the Christmas season—not the winter that comes every year, but the Winter that lasted forever and seemed to cover the whole earth. It was the night before we’d planned to go to Mass just outside the Valley. I lived in the Valley with my brothers, Cuerpo and Sukay. We’d planned to go to church the next morning, on the other side of the river and the mountain, and see the priest in his green vestments for Ordinary Time.

That night, we were attacked.

The ones who went to the windows to see what the noise and the bright light was, died instantly. The ones in the houses that took direct hits, died soon after. Half the people in the Valley died in the initial attack.

Those of us who could walk went outside the next morning and saw the fog, and felt the warm rain. It was a drizzle, the temperature of bathwater; it smelled like burnt plastic. After a few hours, you couldn’t smell it anymore. A few hours more and the rain stopped. But the fog never really went away.

It has never gone away from the Valley.

And then it was Winter—the Winter that never left the Valley; a lukewarm Winter of bathwater rain every day, no stars, the sun a patch of yellow in the mist that was always there, the clouds that were never farther away than the tops of the houses left standing. Fog was on the ground every morning; it lifted a little after the warm rain, and then it descended when the yellow patch of sun set orange in the west.

A barrier went up on our side of the river– a bright orange wall that went higher than the fog.

And that was how our new lives began, in the Winter, when Ordinary Time never came.

Every week, the National Guardsmen came back on a train through the wall’s one gate—always in their suits and gas masks, so they didn’t look human. Every week, there were bottles of filtered water and cans of food, dull silver neither marked nor labeled, rationed to each person according to our body weight and packed into a white paper bag. There was never anything solid or dry– no bread, no meat, no whole produce. There were never any seasonings, either. Only pre-cooked white rice or cornmeal mush that fell out of the can in a single solid mass, or slimy vegetables in a liquid slick. The rice and mush alternated by the week, but the vegetables had a longer cycle– creamed corn, whole corn, spinach, white beans, red beans, string beans, tomatoes. Every once in a while, fruit. Once I got peaches that were sliced instead of cubed. Once Cuerpo got mushrooms.

The bag was always printed with the same instructions to eat the starches together with the produce to make a protein, and a stern injunction not to share or trade rations for fear of malnourishment. But of course we did—Cuerpo, Sukay and I pooled everything into a pot and warmed it up, then scooped it back into the cans and ate it with those plastic spoons we were ordered to bring back the next week. On the rare days we had visitors at our house from other parts of the Valley, they would pool their rations with us, and we’d give the guest the biggest portion– hospitality, the kind of thing civilized folks practiced in the time before the winter. And then the guest would always refuse the biggest portion, and we’d all eat the same amount. It made us feel rich. It made us feel human.

January 18, 2017
A Testimony Worth Reading: A Review of "You Carried Me"
Next Post

January 20, 2017 Presumption, Slippery Slopes and Today's Inaguration
Recent Comments
0 | Leave a Comment
Browse Our Archives
get the latest from
Steel Magnificat
Sign up for our newsletter
POPULAR AT PATHEOS Catholic
1