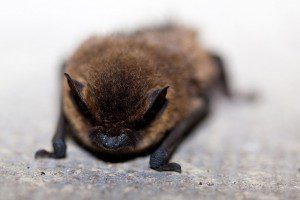 I grew up associating Lent with fish sticks and bland, canned-soup casserole on Fridays. My daughter will grow up thinking it has to do with bread and borscht on Wednesdays, and sick bats.

My little Byzantine Catholic church always has a soup social on Wednesday nights in Lent. There are big loaves of bread, fruit cups and vegan soups for those who observe the strict fast, and cream soups and macaroni and cheese for those who just go meatless. The soups are labeled “strict fast”or not with hand-written notes, so there’s no mistake. Afterwards, there are confessions for an hour while the children play outside in the dying light; then we pray the Liturgy of the Pre-Sanctified Gifts.

This last Wednesday, there was bright orange creamed pumpkin soup and pale cauliflower coconut soup with the bread and macaroni; there was also an empty crock pot labeled “Borscht–Strict Fast.”

My friend Nataly brings the borscht. She lived in Ukraine for fourteen years. Living in a country where nearly everyone, Orthodox and Catholic both, fasts from meat and dairy during Lent, you’d better be able to cook root vegetables and make them taste like food, and Nataly can do that. Everyone talks about her borscht. You wouldn’t think “earthy” was a compliment, when describing a soup, unless you’d tasted the delightful earthiness of Nataly’s borscht– or so I’m told. I didn’t get to taste it. There wasn’t any there.

Nataly wasn’t there either. Her daughter is in the school play this week. We all assumed she’d gotten too busy to cook. We ate our cauliflower soup and our pumpkin soup. The children went to play outside.

One of the other parents ran in to give an announcement. “There’s a bat hanging below the banister,” he said. “Don’t let the children go near it. They can carry rabies.”

I didn’t know which banister. Like most buildings in its neighborhood, Saint Mary of the Assumption is built into a steep hillside;  there are four different staircases to get from the social hall to the church.

The children didn’t know which banister either, but they were running around up and down the stairs to find out. Everyone was excited to see the bat.

“Remember,” I said, as I chased six little girls up a flight of stairs, “We’re looking, we’re not going near. Nobody’s going to touch the bat. Bats carry disease.”

And there was the bat, a little brown one the size of my thumb, hanging head downwards at the top of the steps. No one could enter or leave the church without passing by him.

“He’s just a bat,” I said to the gathered children. “They’re very good for the ecosystem. They eat gnats and mosquitoes.”

“I like bats,” said a girl who lives out in the country away from town.

“He may be sick. Or maybe he came out of hibernation just today, but it’s getting chilly so he’s a little stunned. Don’t touch him! He’s probably harmless, but he’s a wild animal. If you touch wild animals they may bite you.  I mean it!”

One little boy jumped away from the bat at my warning.

“If a raccoon or a rat was eating your garbage, would you try to pet them?”

I went back to rambling about the ecosystem, as parents do.

It was after I hung up that I realized I had no idea which doorstep.

It’s surprisingly difficult to find anything that’s been left “on the doorstep” around Saint Mary’s. The church itself has a front and a side door, the social hall has two, and Father’s residence has three, all on different levels and hidden behind bushes and stair-step planters. It’s impossible to see more than one doorstep from any vantage point.

“There’s a bat hanging on the banister,” I explained, “It’s probably sick. And Nataly left a pot of borscht somewhere on the premises but we can’t find it.”

They both looked as if they didn’t know what to make of that; then they went in to hear confessions.

I remained on the landing, making sure penitents on their way to confession didn’t bump into the sick bat.

Nataly showed up just before liturgy, needlessly apologetic about the borscht. There was no time to ask her if they had bats in Ukraine. It was time to set aside earthly cares and go to Liturgy. We chanted our litanies and psalms; we repented of our sins. We listened to the reading of the Holy Gospel and the homily by the visiting priest. We were blessed with the candle and sang “O Gladsome Light.” We shuffled into the aisle to make our Great Prostrations, forehead to the carpet. We bobbed up and down, from our knees to our feet and back again, chanting “Let my prayer ascend to you like incense, and the lifting up of my hands like an evening sacrifice!”

After liturgy, I told Nataly about the bat.

“We had a bat in our heating duct in Ukraine, once,” she said pleasantly. “The lady next door kept saying it’s a very bad omen.”

It’s been two days and so far, my fortune hasn’t gotten any worse.

But then, no bad omen worries me when I’m at Saint Mary’s. 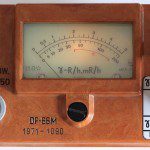 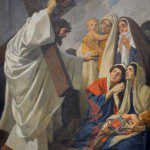 March 24, 2017 The Eighth Station: Jesus Consoles the Women of Jerusalem
Recent Comments
0 | Leave a Comment
Browse Our Archives
get the latest from
Steel Magnificat
Sign up for our newsletter
POPULAR AT PATHEOS Catholic
1