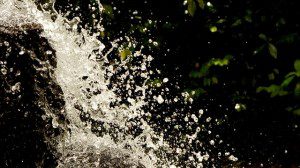 I don’t know a blessed thing about Peter and Paul. Sorry to disappoint.

There are saints I feel very close to; there are several I call “Dad” or “Mom” instead of “Saint so-and-so” and hug their icons before going to bed. There are saints that alarm me so much I cringe when I see their images. And then there are saints who seem like strangers to me, and Peter and Paul go into that category. Peter is the one in the orange robe who always stands right behind Jesus. Jesus must have accidentally trod backwards on his toes a hundred times in his whole public ministry. Paul is the one in the pink robe with the austere frown. I wouldn’t want to run into him if I was late for church or not minding my p’s and q’s. Peter has white hair. Paul has brown hair and a bald spot. Peter holds keys and a net; Paul holds a sword. They both look so formal that it’s daunting. They know me and love me, but I don’t know how to get acquainted with them.

I’m told that “Wade in the Water” was one of the coded messages that slaves sang to one another, to instruct each other how to escape. So it’s not only Peter and Paul being used as a metaphor, but that metaphor being used as a code besides. A code using a metaphor, layers of meanings like onion skin. Most of life is like this anyway.

I hummed the song to myself as I got ready for a trek to Divine Liturgy.

The only way to get to our church was to catch the last bus downtown before the two o’clock school break, then to wait around for an hour before catching the only bus that goes to West Virginia at 3:30, then wait around across the river for a few hours before walking uphill  to the seven o’clock liturgy and riding home with the cantor. This is likely one of those cases where we’ve exceeded the reasonable limits of “obligation,” but I wanted to try anyway. I’ll do just about anything to get to Divine Liturgy.

“We’ll get to go swimming,” I told my daughter.

Swimming was a necessity; the heat was just on the cusp of where I can stand it before my autoimmune symptoms drag me to the pit of hell. The only way I could manage the trek was if I spent most of it in a swimming pool, like a hippopotamus.

Rose and I found our swim suits. We got two towels out of the dryer. We grabbed a few cans of tuna and a sack of unfrozen ice pops for the Friendship Room— Molly is always in need of frozen treats to comfort the homeless suffering from heat exhaustion, this time of year, so when I saw the ice pops were on sale I bought two packages. I found a skirt I could pull on over my shorts. I stuffed everything into two canvas bags.

We caught the last bus downtown.

It was a steamy but pleasant walk down Fourth Street from the bus depot to the Friendship Room. We passed a gaggle of children playing in a sprinkler– there’s no pool downtown, nothing to do for fun in the summer, so one of the local churches had rigged up an elaborate sprinkler at the playground in their parking lot. Beads of water shot in six directions at once, catching the sun like jewels.

Rose shook her head. “I want to go to the Friendship Room.”

The Friendship Room isn’t just a room. It’s a duplex house with a small backyard and a privacy fence. Several people were crowded into the yard.  No one was very clean or very comfortable; they were all stripped down to shorts and tanks, hovering near an oscillating fan under an awning.  The yard was hot and close. It smelled like poverty and suffering bodies, but everyone there was smiling. They all seemed to know and like one another, and they welcomed us.

“Want something to drink?” asked a volunteer as I handed off my ice pops. They never let you get away with not taking water at the Friendship Room.

Rose and I took a chilled water bottle each, and went across the street to the church.

I don’t feel safe in Latin churches, not in this diocese where I have known people to be so cruel, and I certainly don’t feel safe in this enormous, staunchly traditionalist Baroque church. I used to– I was married here. I used to love the Latin Mass. But it’s not my home anymore. Still, I like to sneak into the basement adoration chapel next to the social hall and worship Christ in His other disguise, after I’ve visited Molly’s guests.

The basement was cool, sterile and dark. There were signs near the door: “Adorers, do not open the door between 9 PM and 9 AM. Keep our church safe. Beware of panhandlers! Do not give them $$$, call the police. Please observe modest dress in the sanctuary and in the chapel at all times. Ladies: slacks or skirts, no shorts.”

I pulled the skirt on over my shorts, hopping up and down like a woman in a sack race. 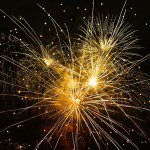