On Flags, Athletes and Christian Reverence

That’s nationalism, the placing of a country before God. A Christian is supposed to honor her country and respect it, but never to treat it like an idol. According to the Catechism, Catholics in particular are required to respect civil authority, participate in government by voting and paying taxes, and to obey the country’s laws as far as we can. But we are not only allowed but required to disobey any of our country’s laws if they contradict the moral order, the fundamental rights of persons, or the teachings of the Gospel. Legitimate acts of civil disobedience are not only permissible, they’re the rule. Because our country is not our God and where God and country differ, we have to side with God. Love and honor for your country is a good thing. Nationalism is idolatry and a sin.

So it’s always seemed problematic to me that we treat the American flag, a symbol of the country, the same way we treat our religious objects, symbols of God. I’m not saying it’s idolatry; I’m saying it seems like it to me. I don’t know the answer to my difficulty. I never pretended to be a theologian. But it does bother me.

I also don’t know how every other denomination of Christianity views reverence toward the American flag, but I don’t see how they’d be able to form a coherent Biblical argument for treating any country the same way they treat Christ.

Which brings me back to today. Today, I’ve seen people I believe to be devout Christians reviling Colin Kapernick, who is also a devout Christian, for his small act of protest against the flag. Kapernick was baptized Methodist and confirmed Lutheran. He prays when he walks onto the field to play football and cites his faith as the basis for his game. It’s also the basis for his philanthropy: he raised two million dollars to feed Somalians last year, and donated fifty thousand of his own money to Meals on Wheels. He’s pledged another million to other charities, and he’s worked with an organization that provides clothing to former prisoners. He not only professes Christianity but acts like a Christian as well.

And people are calling him a “thug” and other racially-charged insults, because he has repeatedly committed a small act of civil disobedience in regards to respect for the American Flag.

Kapernick said that he could not stand at attention to honor the flag during the National Anthem before football games. Instead, he chose to take a knee– not a fundamentally disrespectful gesture. He didn’t spit on the flag, or flip it off, or shout insults. He took a knee. When he heard the music played in homage to the symbol of the state, he quietly and politely refused to perform the expected obeisance because he believed the country is guilty of systemic injustice. He quietly honored justice, a Divine attribute, rather than a country  created and run by fallible men. Because of this, he’s been reviled by the media and is out of a job, but he’s stood firm. And today, dozens of other NFL players have followed his example.

As a Christian myself, I feel that he was absolutely right. 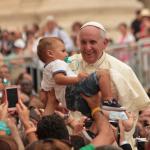 September 24, 2017
What Do You Call a Catholic Against the Pope?
Next Post 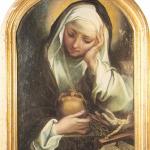 September 25, 2017 Before you Compare Yourself to Saint Catherine of Siena...
Recent Comments
0 | Leave a Comment
Browse Our Archives
get the latest from
Steel Magnificat
Sign up for our newsletter
POPULAR AT PATHEOS Catholic
1