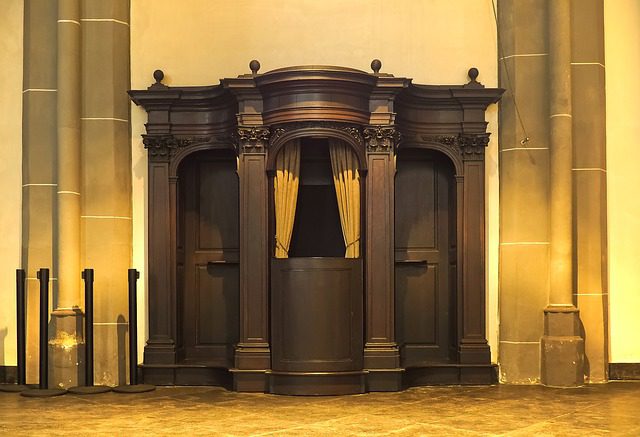 A respected apologist recently shared a short comic strip that had me scratching my head.

The four panels portrayed an extremely geeky salmon-colored boy who looked about nine years old, wearing a salmon-colored necktie and a button-down shirt tucked into his kahkis, and holding a stack of unmarked white cartons in front of a salmon-colored wall. His hair was gray. If this boy went to my school growing up, someone would have knocked those cartons out of his hands for a prank, and the joke would have been on them because the cartons are meant to represent the boy’s sins.

The cartoon had no dialogue, but the captions went like this:  “John has four mortal sins. He goes to confession. He tells three, but is ashamed of the other. He comes out with FIVE.” The panels portrayed John standing in line, walking into the confessional, and coming out with a fifth carton marked “sacrilege” on top of the others. The apologist had captioned the cartoon “Don’t be like John,” and I do agree with the apologist. You shouldn’t deliberately leave out mortal sins in confession. Also, never wear a shade of foundation that exactly matches your tie.

I don’t like much else about the little comic strip, however.

My friend who is also an apologist started to list some of the issues right off the bat. “John had to know all of those sins were mortal and deliberately consent to committing them for the sins to be mortal in the first place. Then, when John went to confess his mortal sins, there had to have been no mitigating circumstances inhibiting his ability to confess them—such as, say, shame—for his previous sins not to have been forgiven and for John to have committed the additional mortal sin of sacrilege. Don’t bind up burdens for John to carry that you don’t have to lift a finger to carry yourself.”

I noticed something further. John looks suspiciously young to have committed four mortal sins. I don’t know what those sins were, since none of the cartons except “sacrilege” are labeled. It’s not impossible for a child that young to commit a mortal sin, but if I were a priest hearing the confession of a small boy who claimed he’d committed four mortal sins I’d be highly suspicious. It’s entirely possible that a child as little as John just heard someone define adultery as “the mortal sin of sleeping with a girl you’re not married to,” remembered the times he fell asleep on the sofa next to his sister, put on his pink necktie and ran to confess that. I’d walk him through it very gently, possibly tell him about scruples and OCD. I might even more gently suggest that he have his parents teach him the facts of life or take him to a counselor, but I’d stress that this wasn’t a penance because you can’t involve somebody else in a penance.

It’s no wonder all the children depicted in the Saint Joseph Baltimore Catechism are uptight and prematurely gray like John.  From everything I remember, those books were high on scare tactics like that cartoon and low on careful child-appropriate explanations or descriptions of scenarios a child would be likely to find himself in. It’s not erroneous to state that a small boy commits sacrilege if he deliberately refuses to confess four grave sins to which he coldly consented with full knowledge. But why even bring it up like this? And why would an apologist share this particular uninspired panel so approvingly? Why not share the one where God gives the buff Adam and Eve a pile of gift-wrapped presents, or where the priest has a giant padlock on his lips? Those are entertaining and educational. This one is just puzzling.

It is my opinion that apologists should pay more attention to common problems like scruples and not understanding what a mortal sin is, rather than the puzzle of a young nerd and his four mortal sins.