A Bucket Will Not Save You 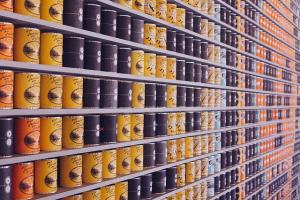 I saw one of those ads for a kit, to help you survive the End Times.

I think this one was being put out by Jim Baker. Every televised preacher seems to have one.  It’s non-perishable food in a special sealed bucket that will float when submerged in flood water, in case that becomes an issue. This all puzzles me, because I thought that that particular stripe of Protestant thinks they’re going to be raptured when the End Times come. But these preachers always seem to be selling buckets of rations you can eat on your raft or in your bunker, when the end times come.

I remember, when I was a teenager, this kind of preacher was weirdly excited about Y2K.

Are any of my readers too young to remember Y2K? It was a big deal, back when I homeschooled on the Planet Charismatic. Everyone was told with absolute seriousness that computers didn’t know how to count past ninety-nine. When the clock struck midnight on January First of the year 2000, computers worldwide would not be able to tell what day of the year it was. This would somehow cause them to have nervous breakdowns. All the computers in the world were going to crash. And civilization as we knew it would suffer a crippling blow.

I know, children, that written out like that, the whole thing doesn’t make very much sense. But what you’ve got to understand is that in 1999, it made considerably LESS sense. Computers were way simpler in 1999 and they weren’t responsible for nearly as much of our lives. People still relied on their landlines back then. Only a few people we knew had cell phones, and they were comically tiny things that only worked to make and receive phone calls or play Snake. They didn’t do anything else. We actually used phone books; we had something called a “phone tree” written out and displayed next to our land line that showed which Catholic homeschool moms were responsible for calling which other moms during an emergency or a last-minute reschedule for the homeschool group activities. My family was the last family to have one of those fancy new-fangled answering machines, which was a separate device that looked like a tape recorder and had to be attached to the phone. We knew what tape recorders were. Cameras were mechanical boxes that had film in them. My father got complimentary copies of the TV guide delivered to his office, and we read them. We had to call the Time and Temp lady to find out if it was going to rain. Computers just didn’t do very much. Yet, somehow, if computers didn’t know what year it was in January of that mythical year 2000, there was going to be a global crisis.

Somehow, my family wasn’t into that particular crisis.

My mother was an inveterate apparition chaser, luridly fascinated by prophecies of the Three Days of Darkness, the Third Fatima Prophecy and everything rumored to come out of Medjugorje; she read the accounts of every unapproved apparition and thought natural disasters were the direct result of God’s wrath. But somehow, everyone in my household understood that this particular crisis was bunk. Maybe it’s because our computer at the time was a wheezy old 1996 Macintosh we’d gotten as a hand-me-down from a rich uncle, and every time we turned it on the computer’s clock reset itself to January First, 1996. This failed to cause a breakdown of anything in our home.

May 25, 2018 Waiting on the Exodus
Recent Comments
0 | Leave a Comment
Browse Our Archives
get the latest from
Steel Magnificat
Sign up for our newsletter
POPULAR AT PATHEOS Catholic
1