By My Magnanimous Leave: How to ask Someone on a Date 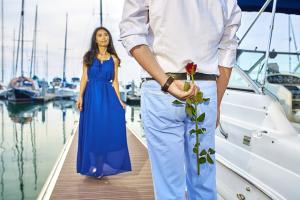 Apparently it’s time to talk etiquette with the Marchioness of Manners, Mary Pezzulo, once again.

I don’t know how stating the fact that women and girls have the right to say “no” to would-be romantic partners and defend themselves if their “no” is not respected makes me a relationship expert, but here I am.

Now that I’ve gone out there and stated the terrible truth that women are humans and ought to be allowed to say “no,” I’m being asked all kinds of questions. I’m also being peppered with odd comments. Some are thoughtful. Some are not.

One of them puzzled me. My answer is too long for the combox; it’s just about the right size for a whole post, and here it is:

Q: When, by your magnanimous leave, does a man have the right to ask a lady to consort with him?

Or did you just mean “consort” in a euphemistic sort of way? Are you talking about sex? In my opinion you may not have sex with a lady unless you’re married to her, she consents, and you’re not somewhere public where people will see. If you expect a different answer, you should know not to ask me of all people. That’s what I’m going to say.

Or did you mean going on a date? That’s a horse of a different color. A man is allowed to go on a date with a woman if she says “yes” to the suggestion of going on a date with him. The way to find out if she says “yes” is to ask her politely. The time to ask her politely is when you know each other, she’s not seeing anybody else, there’s no gross imbalance of power between you, you’re reasonably certain that you two like each other and you’re certain you aren’t related.

The way to ask a woman politely is to approach, call or email her at a convenient time and ask “Would you like to go on a date with me?” Don’t make common historic mistakes such as approaching her father first and offering him a flock of goats, or raiding her house and dragging her back to your ancestral stronghold, or pulling her pigtails and calling her “carrots,” or by having your friend John Alden ask her on a date for you. Just ask her, in a pleasant tone. Maybe make it less open-ended by actually suggesting a time and place to go on a date. “Are you free to go to Olive Garden with me some evening this week after work?” or “Would you like to go to the Sock Hop with me at Iola’s house on Saturday at six o’clock?” or similar is customary.

Now, all you have to do is wait for her answer. Sometimes men are frustrated by a woman’s answers and spend days puzzling over what she could possibly have meant when she gave an answer. I’ll demistify it by giving you a few rules of thumb. When a woman says “no” or “no thank you” and doesn’t suggest a different time or venue, she doesn’t want to go on a date. Some women will try to be gentle by adding an excuse, like “I have to wash my hair,” but they are lying. Hair washing actually only takes a few minutes, not all night. I don’t know why men don’t know this, since they have hair too. She’s just making up a nonsense excuse and praying that you read between the lines. If she says “yes” or “heck yeah, I flippin’ love Olive Garden,” then the answer is yes and you may proceed to take her on a date. If she says something that isn’t a “yes” or a “no,” such as “Who’s Iola and what is a sock hop?” you’ll have to continue in dialogue with her until you both understand the nature of the request and she gives you a “yes” or a “no.” When that happens, pleas get back to me, because I don’t know what a sock hop is either.

Honestly, it’s not difficult. The foundation not only of romantic love but of courtesy, manners and not being a rude lout is the Golden Rule: treat one another as you would like to be treated. Exercise some empathy. If you were the lady you’d like to consort with, and someone just like you asked her to go to Olive Garden or the Sock Hop, how do you expect you would feel? How would you feel if you wanted to say “no” but were afraid to? What would you like the gentleman to do if you said “no?” Would you like it if the gentleman got forceful with you, or kept pestering you, or blew up and called you names?  How would you feel about society’s expectation that gentlemen ask and ladies wait to be asked in the first place?

Yes, that last one is tricky. You see, the Golden Rule is simple, but its implications get complicated fast. If we’re going to live like good Christians, lovers and just generally ethical people, we have to look at all of our culture’s expectations and decide whether they’re things we would like if they happened to us. And if not, we have to face the possibility that they’re unjust expectations. And if we determine that expectations are unjust, we have to stop going along with them. This will take us to all kinds of terrible places, not just Olive Garden or the Sock Hop.

In addition, if you try to imagine how the lady feels but it turns out you’re wrong: accept that, and respect her actual feelings instead of what you imagine she ought to think. “No” means “no” even if you figured she’d likely say “yes.” That’s how life is sometimes. It’s disappointing, but disappointment is a normal feeling you need to learn to overcome. Go to Olive Garden by yourself, or with your guy friends.

It’s fairly simple, really. A lot of misunderstandings can be avoided if you genuinely care about what the other party feels– and if you don’t care about her feelings, why are you asking her on a date? You obviously don’t love her.

As for what to do when you’re on that date, I’ll let Joel and the bots tell you all about it:

May 30, 2018 A Non-Apology and a Response from a Catholic Feminist
Recent Comments
0 | Leave a Comment
Browse Our Archives
Follow Us!