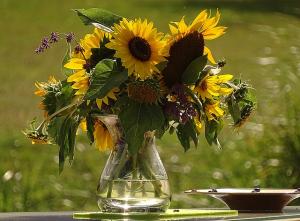 The bus was ten minutes late.

I knew what that meant. It meant that I ought to abandon my mission and go home defeated. But we were out of pencils for Rose’s homeschooling, and she wanted craft sticks for a birdhouse, and there was a sale on fresh peaches. I had to go to Wal Mart.

I waited in the blazing sun until the bus pulled up with the driver I’ll call Betsy at the wheel. Betsy comes from Appalachia, but not the northern part where the steel mills are. She’s from somewhere more rural and far south of here. I can tell that by her accent, and her friendliness. She’s not a cross and suspicious Steubenville native but a genuine hillbilly of the very best kind. She’s also quite old, and  forgetful. And she’s the worst driver I have ever known.

The bus passengers’ gossip is that Betsy was given the job out of pity, when she retired as a truck driver due to old age, because she hasn’t got any money or anyone to care for her. She lives alone outside of town in her own little house with an alarming number of cats, and if she went into the nursing home she’d have to give up her cats, so she drives the bus. She drives back and forth every day, having memorized the route like a milkman’s horse, but she’s never anywhere close to on time. She has driven right past me as I shouted for her to stop on blazingly hot summer days, and it’s not much easier to get her attention when you’re on the bus either. She can’t always hear the beep when you pull the string at your stop, so you have to shout at her, and even then it sometimes doesn’t work. She can’t remember when her shift ends, so she waits until the other drivers say “good night” to her on the radio before driving back into the station. I’ve been on the bus, holding on for dear life, when she pulled out in front of a semi truck or slammed the breaks so hard that people flew out of their seats. I don’t usually let my daughter ride Betsy’s bus anymore.

I have sworn and muttered uncharitable things when I saw the bus pull up with Betsy at the wheel, more often than I can confess. I swore just then. But I pulled myself together and smiled politely at her as I boarded.

“Ya look so lost without your daughter,” she said pleasantly. Betsy is always pleasant.

I took my seat.

The ride was relatively uneventful, as far as bumps and sudden stops. Betsy seemed unusually focused. Nothing went wrong except that the bus was very crowded, because she was late. I felt annoyed anyway.

We’re almost ready to get a car– a friend can give me their old car before very long. Another friend bought me six lessons with an instructor. I need to find a way to pay for one last lesson so I’m sure I can take the test.  I need to find a way to get insurance. But somehow, if nothing goes wrong, we’re going to be able to drive ourselves on errands soon, and never take the bus with Betsy or Old Scratch or anyone else again. I was relishing this thought as we drove up Sunset Boulevard, and somehow it made the ride with Betsy even less bearable. I was more impatient than ever.

Everyone around me was talking. I understand it’s not culturally acceptable to talk on the bus in other parts of the country, but in Steubenville everyone talks to one another on the bus. It’s my chief source of local news. People have no filter on the bus. They’ll say whatever comes to mind.

The woman directly behind me was busy telling everyone who would listen that she had six months to live.

“What does she have?” I asked after she got off the bus.

“Cancer.” The woman in front of me shook her head. “It came back. Cancer goes away, it comes back like wildfire. There’s nothing they can do this time.”

“I wouldn’t wanna know,” said the woman in front of me. “My daddy, now, he kept saying the whole last year of his life that he thought he was dying and they just weren’t telling him. I said he shouldn’t wanna know, but he did. And he was right.”

The woman shook her head. “I wouldn’t.”

“My aunt’s cancer came back,” said Betsy, “And it was all over. It was like wildfire. It was in five places.”

“Was it in the lymph nodes?” asked the woman.

We murmured sympathy in that terse, wordless, Northern Appalachian way.

July 16, 2018 Drinking Straws, Disability and Able-Bodied 'Splainers
Recent Comments
0 | Leave a Comment
"Gardens can be a great source of creativity, challenge, satisfaction, and fulfillment. Perhaps that is ..."
alwayspuzzled During a Dangerous Year
"Christian film has for years done little more than massage an already established belief system ..."
The Vince Wylde Show I Am Very, Very Ashamed: The ..."
"I'm glad Rosie is better."
Bemused During a Dangerous Year
"My kid had a 24 hour bug this week. He was curled up on the ..."
Lark62 An Ordinary Danger
Browse Our Archives
get the latest from
Steel Magnificat
Sign up for our newsletter
POPULAR AT PATHEOS Catholic
1

More Important than Belief in the...
Messy Inspirations
Related posts from Steel Magnificat