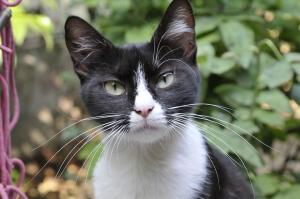 You might remember that I’ve mentioned LaBelle is haunted with stray cats. Elderly women set out salad bowls of dry food to feed them, so they’re well-fed and tolerant of human company– aloof and unfriendly but tolerant. They take shelter under the porch in winter, and even make their way into our basement, if they can find the spot where the land lord didn’t seal the old coal chute. They keep the neighborhood rat population down. I view them as a blessing.

Three years ago, the evening of the Feast of Holy Father Saint Elijah, one of the cats walked into our window, as I’ve mentioned before. That cat had a white triangle on his nose like the peak of Mount Carmel, and I named him Elijah. I’m always naming the cats for the feast on which I find them. There’s Elijah who came in the window, Olia who took shelter on the porch, Dmitri who got in upstairs while I was napping and jumped on my bed, Noel whom we found in the kitchen after Christmas Eve liturgy.

Rosie found her cat on the lawn one evening, the day after the feast of Saint Elijah this year. We hadn’t been to church because we don’t have transportation. I’d prayed for Elijah to send us a car that I could drive to be blessed with the other cars after liturgy, but apparently I didn’t enunciate the word well because Elijah sent a cat instead.

This cat was far too beautiful to be a stray. Her coat gleamed in the porch light. She was soft as velvet, black with four white paws and another white triangle on the tip of her nose just as Elijah had. She was younger than Elijah, but she resembled him.

“You should call him Elisha,” I said.

“I named her Johnny,” said Rose, not realizing she was fulfilling a prophecy.

The cat was extremely friendly. Rose patted her and dangled blades of grass for her to toy with while I pondered the Holy Gospel: For all the prophets and the Law prophesied until John. And if you are willing to accept it, he is the Elijah who was to come. He who has ears, let him hear.

I wondered if something was going to happen.

Johnny came every evening. I would’ve liked to bring her inside, but Michael is allergic to cats, so she remained a guest. Rose occasionally left tuna out for her, but she didn’t take it, and my head rang with scripture again. For John came fasting and they say, ‘He has a demon.’  The Son of Man came eating and drinking, and they say, ‘Here is a glutton and a drunkard, a friend of tax collectors and sinners.’ But wisdom is proved right by her deeds.

Somewhere along the line, the cat’s name got changed from ‘Johnny” to “Joey,” and I added prayer to Saint Joseph to my meditations. But she struck me more as an Elijah, or a John.

The other night at midnight we went outside to look at the stars, the way homeschoolers do, but there were none. It was overcast and humid. We were about to go back inside when Rose saw Joey or Johnny padding toward us, silent and majestic on the near-vacant street. She greeted him, and he came to rub against her leg.

“Let me show you a game I taught her,” she said. She took a skinny stick and ran, scraping it along the sidewalk; the cat chased it eagerly. They ran together in and out of our small front yard and all over the sidewalk: Rose giggling softly, the cat silent and determined, their long shadows stretching out in the porchlight beyond them– the silhouette of a grown woman with a giant panther, following after a little girl and a sleek cat.

“I don’t really have any friends except Joey,” Rose remarked.

She’s been so lonely. We don’t see the children we used to know at church, and I still don’t know when we’ll have a car to see them again. The children she used to play with have moved out of LaBelle or moved on to different things. The boys who let her play Power Rangers with them have grown too big and self-important to do anything with girls except tease them. The girls on the block think she’s odd for disliking the usual girlish things. The older sister of the little ones she plays with across the street teases or sometimes hits her, so she doesn’t go there often anymore. We’re in an uncomfortable place– not having any idea when we’ll move or even if we’ll finally move this year; not knowing exactly how we’ll get a car or when; not being able to afford to go places very often, even if Steubenville had a large number of places to go for fun. We can’t even play in the back yard because of the senile neighbor I’ve referred to as Miss Manners and her German Shepherd. Miss Manners has decided that the backyard and the alley behind it belong to her, and I’m tired of calling the police. Summer has been dull, cramped and lonely.

That night, I prayed for help.

August 2, 2018 Why Change the Catechism on the Death Penalty?
Recent Comments
0 | Leave a Comment
Browse Our Archives
Follow Us!