It’s Not Enough to be a Humanae Vitae Family 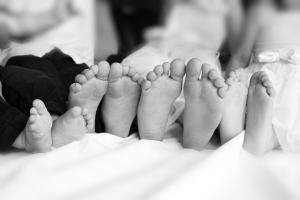 This is the week of the year where I’m supposed to say something about birth control, NFP and Humanae Vitae.

Last year I wrote a bit about NFP Awareness Week and how I honestly find Natural Family Planning a boring topic. I practice NFP. I obey the Church’s teaching on contraception and so forth in my own life. But I’m always at a bit of a loss for words when it comes to cheerleading for NFP. In my neck of the woods, all the Catholics already know about NFP and the Church’s ban on contraception. There never seems to be anything that needs to be said. Other bloggers on Patheos can go on at great length about it; to me it’s a bit of a chore.

Still, this would be a good week to say something about the encyclical Humanae Vitae, because this week is its fiftieth birthday. A fiftieth birthday comes once in a lifetime. It’s not at all an area for which I have an affinity, but I did study the Church’s teaching on birth control in bioethics classes at good old FUS. I’ll try to make this good.

Oftentimes the beautiful, enormous families that show up at church looking like a The Sound of Music revival get called “Humanae Vitae families,” whereas the families who obey the teachings of Humanae Vitae and only end up having one to three kids don’t. I never did like that much. I think all of us who are trying to be faithful to the Church’s teaching are Humanae Vitae families.

We have to be authentically Catholic families, striving to create a Catholic culture.

Bear with me a minute and let me explain.

I don’t think the Church’s teaching on sex and contraception, can ever make sense in isolation. Separated from everything else, it just looks like cruelty and a bunch of rules for rules’ sake. Separated from everything else, it looks impossible to put into practice even if you felt like a challenge. Families that eschew birth control, either to practice NFP to avoid pregnancy or to go ahead and have as many children as they can, are going to face terrible obstacles, maybe obstacles they view as impossible, in our culture as it is. Because our culture is a culture that worships mammon, and babies are not an economically sound investment. Pregnancy leaves women tired, unproductive and hard to employ. Someone has to sink thousands of dollars into their healthcare. And babies don’t offer a good return on all the money you’ve sunk. They just keep demanding to be fed and cared for year after year without bringing profits into the house. They ruin your figure and kill the mood for sex. Babies make messes. They make noise. They make life complicated. Our culture doesn’t like those things. Our culture likes money, power, power and money. From the standpoint of power and money, families are a rotten investment.

And somewhere along the line, a sizable number of Catholics have decided that that’s how it’s supposed to be. We’re supposed to avoid birth control and be Humanae Vitae families, while just accepting the general hostility to life that our culture holds as normal.

I have encountered many people who are avid about the Church’s teaching on contraception but laugh off other key Catholic teachings on how we ought to live as optional; or they flat out deny them as modernistic nonsense. I have also met many people who strive to embrace the entire teaching of the Church, and I am very grateful for and humbled by their example. I know you’re out there– thank you and God bless you. Keep being faithful. You are a blessing to the whole world.

But to hear some people talk, you’d think Catholicism was nothing but a fertility cult with weekly mandatory liturgies.  If we are insistent on nothing but the Church teaching on sex, we’re going to earn every single caricature people make of us. We’ll be ridiculous, irrelevant, and not really Catholic at all.

Bishops: NT, Early Church, & Baptists (vs. James...
[book and purchase information] *** [originally posted on 16 January 2001, from...
view all Catholic blogs
What Are Your Thoughts?leave a comment
Copyright 2008-2020, Patheos. All rights reserved.