What “Boys Will be Boys” Really Means 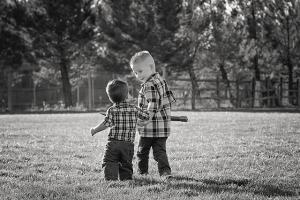 My friend Lindsay posted a facebook status today that had me jumping out of my seat:

“Just in case anyone is confused.
The phrase “boys will be boys” means that boys will come home with frogs in their pockets, bite their Graham crackers into gun shapes if you take their super soaker away, climb way too high in trees and try to set their farts on fire.
THAT’S what it means. STOP trying to make that phrase include sexual assault.”

And that’s the best way I can think to put it.

“Boys will be boys” refers to mischief. Boisterousness. A certain playful inability to hold still, think ahead or stop being messy. And as far as it goes, it’s true. Boys will be boys. Girls will be girls too, and in my experience they’re not less messy, mischievous or boisterous. But in any case, boys will be boys.

Boys will attempt to color on paper and wind up getting marker all over their sleeves somehow. Boys will walk across a soaked, muddy baseball diamond to see the tracks they leave, and they won’t notice this isn’t a good idea until they’re completely stuck in the mud and you have to dig them out. Boys will slide into home plate at a kickball game, even though they’re in their good light-colored khakis. And so will girls, for that matter, equally often. And a good parent will think ahead by buying them sturdy play clothes that can be bleached, and cheap sneakers that can be thrown out.

Boys will climb up the twisty sliding board at the park and not stop climbing after they’ve been accidentally kicked in the face by a child coming down. Boys will try to use the swing set by lying facedown on their stomachs, and sometimes they’ll slide headfirst off a swing and smash their faces on the ground. Boys will try to make their own fireworks out of the little dashes of gunpowder that come in the caps for cap guns. They’ll light fires with magnifying glasses. They’ll poke bee hives to see what will happen. And so will girls, for that matter, equally often. And a good parent will teach their children safety rules and enforce the rules if the children won’t listen. Because “boys will be boys” doesn’t mean that boys are magically protected from consequences. Boys could get badly hurt, or hurt someone else, so they have to be helped to behave safely.

Boys will play with other children they like and avoid those they dislike, and sometimes this will make the disliked children sad. They will form themselves into cliques based on interests and similarities, and sometimes that will be perfectly understandable, but sometimes it will involve cruelty to other children. They will occasionally try to settle their differences with brawls, which can be a harmless part of growing up or they can seriously hurt someone. Boys often go through a phase where they think girls are icky, so they tease the girl or annoy them, or turn the hose on them, or throw dog poop. And good parents will prudently realize which of their boys’ behaviors are harmless and which are abusive, and they will stop the abusive behaviors at once. Because boys being boys does not mean that boys are allowed to be bullies. No one, male or female, is allowed to hurt people even if he doesn’t mean to. Childhood is a time for learning good behavior.

Boys will not sexually assault women. Sexual assault is committed by men, not boys. If a male commits them, it means he’s not a boy anymore. A young man committing sexual assault against a young woman means that that man was not taught good behavior, or even mediocre acceptable behavior, by his parents. That young man’s parents are failures, and he is a dangerous man who needs to be put somewhere away from anybody he could harm. Maybe he can be taught differently and redeemed; I don’t know. But a male who sexually assaults a woman is not a harmless young scamp. He’s not a teenager acting mischievously in a way that’s to be expected. He’s not a promising young lad guilty of an embarrassing indiscretion. And he’s certainly not a boy being a boy. He’s a man being a criminal, an abuser, a person who deliberately hurts another person in a particularly inexcusable way. He has to be stopped.

Boys will be boys, and that means they grow into men. Men can hurt people, but they don’t have to. There’s nothing in the nature of men that makes them hurt people. They have to be taught not to hurt others when they’re boys, and they have to face appropriate consequences if they hurt others when they’re men. That doesn’t mean expecting boys to act like something other than boys; it means teaching boys the difference between mischief and boisterousness on the one hand, and assault and abuse on the other. And it means expecting them to know the difference when they’ve grown up enough to want sex, and punishing them if they don’t.