My Thoughts on the Reported National Basilica Invasion 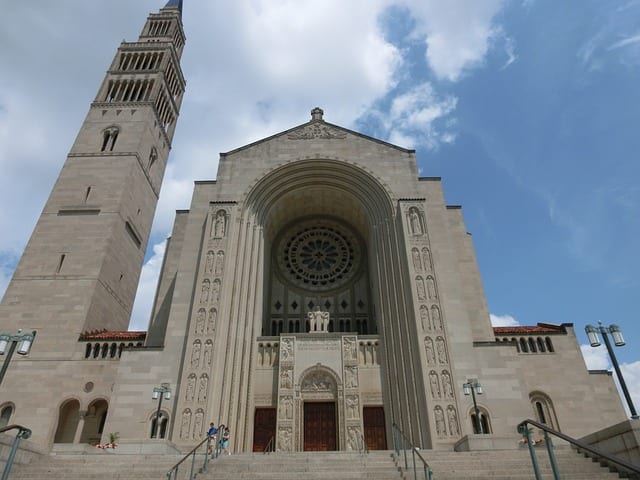 Early yesterday I was naively thinking: let’s pretend a Catholic priest who happened to be white and his mostly white congregation, were carrying a statue of Mary in solemn procession around the Lincoln Memorial, complete with altar severs in surplices and chanting of the Rosary in Latin. And then video was released of a big gang of Native American youths, wearing the insignia of their tribe, surrounding the priest and shouting at him with what sounded like mock gibberish versions of a Latin chant but maybe they weren’t; making gestures that looked like a mock Sign of the Cross but maybe it wasn’t;  laughing, clapping and disrespectfully carrying on. And then later video was released showing that those Native American youths had been heckled and shouted at for an hour by people of a third race before the priest got there, and the priest cut between the two groups and walked among them. And the Native youths said they only acted the way that they did because the priest invaded their personal space.

I wondered, and still do.

And then, ironically, an event transpired that was a bit like what I imagined.

Catholic News Agency and the National Catholic Register, two online papers owned by EWTN, printed an identical story that a gang of Native American protesters led by Elder Nathan Phillips had attempted to storm the doors of the National Basilica of the Immaculate Conception and disrupt Mass. They have this on the testimony of a security guard who claims he locked the doors to keep them out– which sounds rather suspicious to me. For one thing, that Basilica is the size of a small town and has many doors; it’s the largest church in the United States. I don’t think it’s physically possible that that guard sprinted around the Basilica locking every door, and if the Native Americans were really trying to invade the Basilica, they would have just gone through a side door while he was trying to lock the front.

All I can find to confirm this, are videos of Native American protesters outside the building marching and performing a dance; I also saw one of them standing on the steps for a brief moment but it doesn’t look to me like they tried to break in or bang on the door. It looks like they marched, drumming; they danced on the lawn; they climbed the steps and approached the doors, then sang standing still; then they left or were turned away. The National Basilica is usually open to the public like one of the museums on the Mall and is crammed with tourists on any given day, so it’s not completely divorced from reason that they just wanted to stand in the foyer making noise and didn’t think this would be too much of a problem. But in any case, they were denied admittance, and then left peacefully. We have on the testimony of one article that people in the church were scared or that this warranted calling the police. And that article is not being picked up by mainstream news sources, and it cloaks almost all of its sources with anonymity.

[ 8:03 PM Update: An article I saw just now, still only from CNA, states that the basilica confirmed that the Native Americans did try to gain entry. But the statement, according to CNA, just says ““a group of approximately 50 individuals attempted to gain entrance to the basilica while chanting and hitting drums… In respect and reverence for the Mass, the individuals were not permitted to enter the Basilica due to the disruption it would have caused during the solemn Mass. The individuals were asked to leave the property after it was determined they did not intend to share in the celebration of Mass.” According to the CNA article the Basilica didn’t say anything official about the Native Americans trying to force their way in or bang on the door, or scare people, or anything like that. They tried to come in and left when rebuffed. When the police asked them to leave the property, they did so without any apparent incident according to everything I’ve seen. And I don’t see this statement posted on the Basilica’s facebook page or press release page. ]

My fellow Catholics do not seem to be affording the same benefit of the doubt to those of our Native American brothers and sisters that they assume feel hostile to our faith, that they would wish to be given to Catholics. That seems to be breaking the Golden Rule very badly.

Besides, what would be the appropriate thing to do if one of our liturgies was invaded by a group of angry people who wanted to be disruptive and bang on drums?

What would be a Catholic response to that kind of disruption?

While to a Catholic standpoint, it seems obvious they shouldn’t try to create a disruption in a Catholic church, I can see how it would look reasonable to others who aren’t Catholic– particularly if their religious practice involved banging drums and singing loud chants during worship.

I see no problem with the ushers, security guards or whoever was there to keep order,  insisting that they move their demonstration out of or away from the Church. Especially if there was a liturgy going on at that time.

But what then? What might a Catholic do, in the face of people trying to get into the church and drum at you and having to be moved?

Could we look at these people as people, as human beings, and try to place ourselves in their shoes? Could we try to listen to what they’re saying and understand why they feel they have to say it in this way?

Christ said to love your enemies and pray for those who persecute you. The Holy Martyrs  gave beautiful examples of this, forgiving and loving their persecutors all the way up to the scaffold and the arena.

It strikes me that we ought to be even more loving with people we’ve persecuted– and many, many Catholics did persecute Native Americans for hundreds of years. Many Catholics were innocent of this as well, but if you read about what priests and nuns did to abuse Native children at the residential schools and the like, it’s shocking. Two of our Holy Fathers, Saint John Paul the Second and Pope Francis, have asked forgiveness of Indigenous peoples for colonialism, but it’s not something that’s that easy or even right to forget just because a man in a cassock said “sorry.” The Church– not the Bride of Christ and her deposit of Faith, but the giant family of sinful people who have taken refuge in her and acted in her name throughout the ages– has become a symbol of white supremacy to many, and they’re not in error to see it the way that they do. Catholics have abused the wondrous gift given to us in this way, and that is our sin, our error. We are the ones who deserve the millstone, not the people who judge us by our actions.

So, if a group of people who remember well what was done to them, by Catholics, ostensibly in the name of the Catholic Faith but in violation of anything Christ wanted, were to push their way into a Catholic church to bang their drums and make a scene after another group of Catholics shouted at their elder, and they had to be turned away from the doors of a church– what might a Catholic do?

Maybe the ushers and some of the people sitting in the back could have gone outside and politely listened to the drumming– keeping an eye on things in case it escalated to violence or an attempt to force their way in, but if it was just noisy drums and chanting, letting it be. And maybe after Mass the pastor and the congregation could have come and said “Welcome! We’re glad you’re here.  Would you like to come downstairs to the basilica cafeteria with us? I want to buy you dinner and listen to you.”

And maybe that would have gone badly. Or, maybe they could have gone down to that warm, rather overpriced cafeteria in the basilica basement sat down with Elder Philips and the others, and listened.

And perhaps they could have learned all that Elder Philips has to teach them about what it’s like to be a Native American. And perhaps they could have taken a turn to talk, and taught Philips and those who were with him about the Gospel of Christ– not the shameful example that was shown to their ancestors, but the Gospel of Christ who wanted us to be one, as He and the Father are One. Many Native Americans know about Christ, but for the ones who didn’t, we could talk about Christ, whom Venerable Nick Black Elk called the Wanekia, the Son of the Great Spirit and the One Who Makes Live.  That could have led to a tour of the basilica; they could have reverenced the relics of Saint Kateri the Mohawk that I recall are in the crypt together.

And maybe we could have all prayed together to Christ, the Son of the Great Spirit and the One Who Makes Live, with drums and chants and the Sign of the Cross.

If the events transpired the way that anonymous source claims they did, wouldn’t that, or something like it, have been the Catholic response?

Isn’t repentance and welcoming in love, always supposed to be the Catholic response?

And isn’t the Catholic response what matters?

January 21, 2019
Why Ask What Martin Luther King Would Have Wanted?
Next Post

January 24, 2019 Boys Will Be Boys, Girls Will Be Shamed
Recent Comments
0 | Leave a Comment
"Holy cow. I think if I had a billion dollars, after I visited Wales and ..."
Todd Flowerday The Prettiest House on the Block
""Can we talk about dress code?" How often I've heard this on a liturgy committee. ..."
Todd Flowerday The Tale of the Monsignor and ..."
"Exactly. Many people who have been College Broke confuse it with poverty."
Mary Why Don’t The Poor Cook From ..."
"also, it makes all the difference in the world if you have middle class parents ..."
MoniLontra Why Don’t The Poor Cook From ..."
Browse Our Archives
get the latest from
Steel Magnificat
Sign up for our newsletter
POPULAR AT PATHEOS Catholic
1