The Scandal of a God Incarnate

The Scandal of a God Incarnate March 11, 2019 Mary Pezzulo 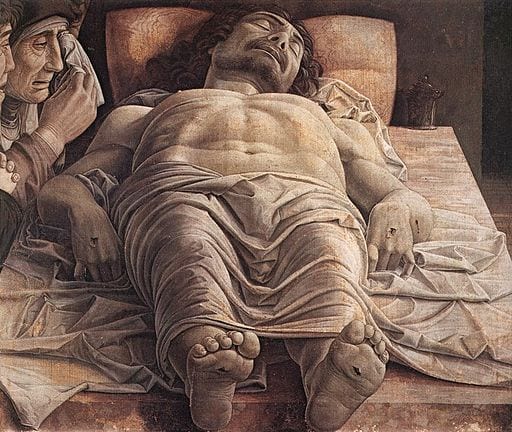 Yet another content warning for my friends who are sensitive to this sort of thing: I’m going to talk a little about penises one more time. I promise I have a good excuse, and it’s to do with Christianity. There will be many fine art paintings as well.

I am still getting feedback on my post from days ago that inexplicably went viral. A lot of people are very thankful that I wrote it, and I’m humbled by the praise they’re heaping on me. But I’ve alarmed some of my Catholic brothers and sisters.

One gentleman in particular was offended with me because I had, in his opinion, written a “provocative” post that would have “reached more people” if it had not been so “vugar” and “lurid.” I asked how I was supposed to avoid luridness when I was describing a Roman Crucifixion. His main objection seemed to be that I mentioned the possibility that Christ had an erection on the cross. He didn’t like the word “erection.”

And I was wrong about crucifixion and erections, as it happens; I thought that the reason they happened was because of the way the crucifixion victim was suspended by his arms. A reader corrected me. It’s actually due to asphyxiation which was often the cause of death in crucifixion. Suffocation messes with the blood pressure somehow. I stand corrected, I apologize for my mistake, and thank you very much.

But as far as talking about Christ as a fully-functioning Man with gentials– that I’m not sorry for. If it was all I ever did, with no regard for the rest of Him, that would be weird, but portraying Christ erect during the Passion and its aftermath is nearly as old as portrayals of Christ in the first place.

You have surely come across Renaissance paintings of Christ entombed, sometimes by Himself or sometimes accompanied by miserable angels, clad in nothing but a fluffy, suspiciously white loincloth. The loincloth often has a lump in it that you try not to think about. But the fact is, that’s deliberate. It’s to portray Christ as the Giver of Life, and to remind you that the Passion of Christ is the Wedding Feast of the Lamb– the particular historic moment when Christ became the bridegroom of the Church and of our souls. Weddings in those days were not considered legally sealed until the bride and groom had had sex, so the painters obliged. The following three images are in the public domain via Wikimedia Commons.

Here’s a famous one by Mantenga:

I love the use of perspective and foreshortening in this piece, by the way.

Here’s another by Hans Holbein the Younger:

I am intrigued by this painting because it reminds me so much of ancient Egyptian tomb paintings of the dead Osiris, but that’s a digression I’m going to avoid like an antivaxxer foaming at the mouth.

The glorious El Greco, now, has no subtlety: 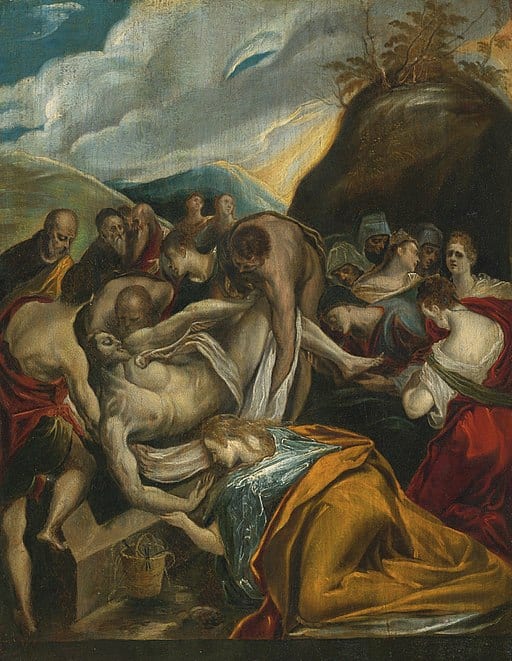 It’s not a suspicious lump in the loincloth, it’s that a strategic fold of the loincloth has taken on a life of its own and looks awfully phallic.

Here in Steubenville, there is an eccentric man– a relic of Steubenville two generations ago when everyone was an excitable Charismatic making “prophecies.” This man is not shy about posting his “prophecies”  all over the internet; you can probably still find him if you wish. A couple of years ago, he became obsessed with the idea that the San Damiano Crucifix was demonic. Here’s a photo of the San Damiano Crucifix, for any of you not familiar: 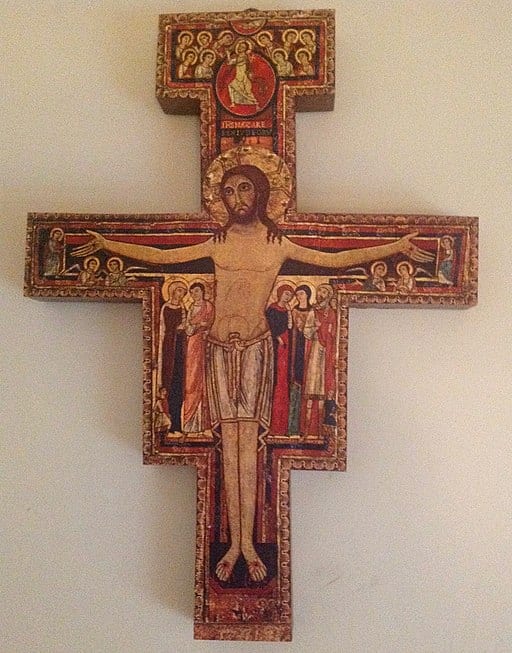 Thanks to Wikimedia Commons and Hoppyh for this image, as I couldn’t find a public domain one that wasn’t blurry. This is a copy of the famous crucifix that spoke to Saint Francis, urging him to rebuild the Church, over eight hundred years ago. Can you guess what the Charismatic man thought was demonic about it?

No, no, that would have been my guess, but it’s not that either.

Yes, you’ve got it now. The man was obsessed with the idea that the devil had induced the painter of this crucifix to include a subliminal penis in order to tempt seminarians to homosexual thoughts. He ranted about this for weeks. He was encouraging his disciples to collect as many copies of the supposedly demonic homosexual San Damiano Crucifix as they could so that they could burn them in honor of Pope Francis’s visit to the United States. And all this because the muscleclature in Christ’s abdomen looked a bit like a giant erect phallus. This man also once voiced the opinion that climate change is caused by the souls of aborted babies trapped in the upper atmosphere. I swear I’m not making this up. I don’t know why this isn’t the plot of a Coen Brothers film, but if it ever becomes one, I want a cut of the profits for suggesting it.

The man is wrong about many things, but this in particular: that’s not a demonic subliminal message. It’s not an accident either; it’s deliberate, and it’s traditional, and if you believe that Eastern Icons are inspired by the Holy Ghost then it’s not the devil’s work. The San Damiano Crucifix was painted with the muscles of Christ’s abdomen looking a bit like an erect phallus on purpose. Remember, eight hundred years ago was barely the beginning of the divergence between Eastern Christian iconography and Roman Catholic devotional art. They really weren’t two different styles of imagery in those days. The San Damiano Crucifix is a variation on the icon of the crucifixion. And the icon of the crucifixion always paints Christ’s muscles to look uncomfortably like an erection. Sometimes they even paint the blood spraying from the side wound at such an angle that it looks a bit like an ejaculation. This is the wedding feast of the lamb. Christ is our bridegroom. This is what bridegrooms do at a wedding feast.

These icon images are in the public domain as well, for the record: 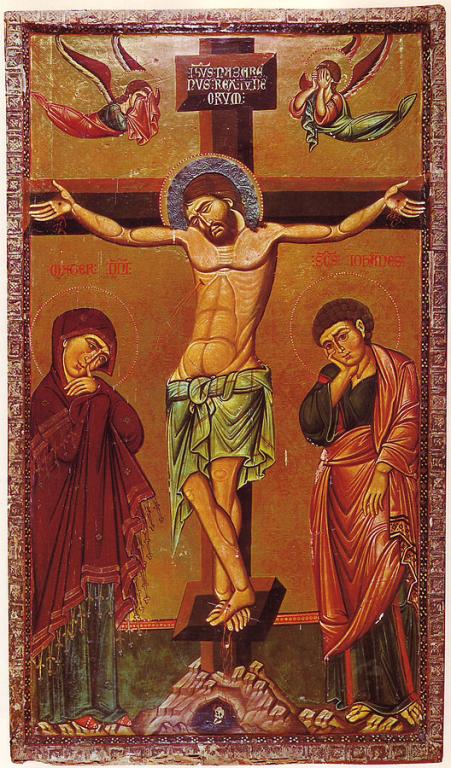 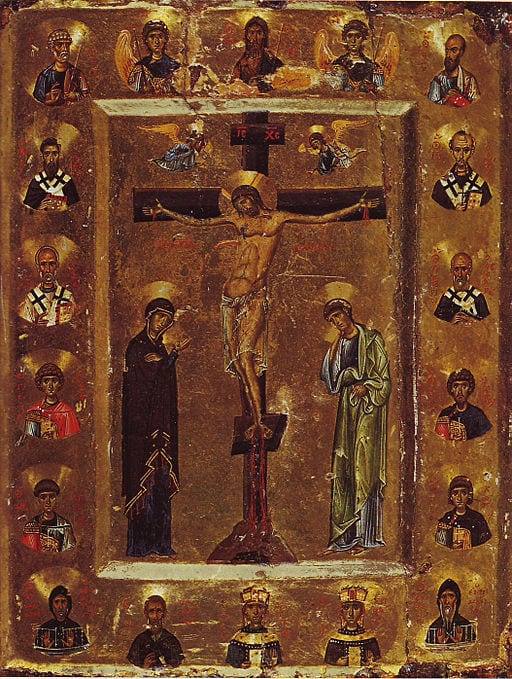 Note the blood not only dripping out but shooting out. That’s not an accident.

This is the scandal of an incarnate God. Christ could have come to us any way He wished, but He chose the most awkward and undignified way imaginable: he chose to become a Man, like us in all things but sin. And men are disgusting. People are disgusting. We eat and drink and go to the bathroom; we burp and sneeze and get erections. We don’t just reproduce with cold scientific dignity like a dividing cell or an earthworm; we do it with sexual intercourse. Try and recall the horror you had when the mechanics of sexual intercourse were first explained to you. Can you imagine anything more embarrassing?

How embarrassing, to be human.

How vulnerable and shockingly earthy we are; how luridly physical.

Christ became Man in order to experience all of this with us– that in experiencing it, He could draw it all up into the life of the Trinity. Our weird, scary, awkward bodies are icons of God now, and not shameful at all.

Is that lurid and vulgar? Of course it is. But it’s also more beautiful than mortal tongue can tell. 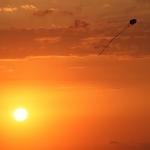 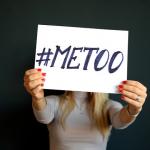 March 14, 2019 Catholic Authenticity, Church Militant, And the Smearing of Abused Women
Recent Comments
0 | Leave a Comment
"The part that gets me is the fact that they go out of their way ..."
3vil5triker . Justice Sotomayor’s Pro-Life Dissent
""they stayed up late to make sure they got the chance to do it"These executions ..."
alwayspuzzled Justice Sotomayor’s Pro-Life Dissent
"Oh, please. Does he have the authority to order a nationwide shut down? Probably not. ..."
BensNewLogin It’s Orwellian, But Not The Way ..."
"He was called being hasty and Xenophobic by democrats when he banned air travel from ..."
Richard Phillips It’s Orwellian, But Not The Way ..."
Browse Our Archives
get the latest from
Steel Magnificat
Sign up for our newsletter
POPULAR AT PATHEOS Catholic
1