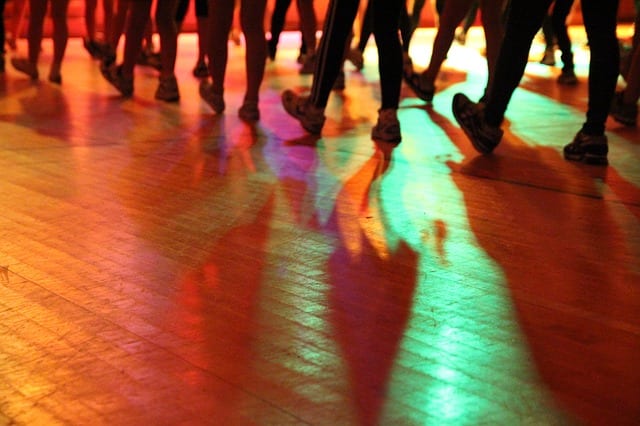 I don’t usually pay much mind to Father Leo Patalinghug. He’s just one of those celebrity priests who posts things on Twitter.

But today, he grabbed my attention and that of quite a few people in a worrying way.

Today, Father Leo shared a short video taken of some kind of aerobics class, which involved a group of women in hot pants vibrating their butts. I’m not going to link to that because, while I think the women were just trying to tone their muscles, the video of the exercise falls into the soft porn category. If women were dancing like that onstage in leotards I wouldn’t attend that night club and neither should you. I was informed later that this might actually be part of a routine from some sort of indigenous tribal dance– and if that’s true, if I saw women in indigenous dress performing this as part of their culture, I might have thought of it a different way as well. In a ladies-only aerobics class, they might’ve just been doing it for fitness never intending for anyone to see. But some things aren’t supposed to be filmed and shared with no context, and certainly not shared by a priest.

Father Leo shared the video with the following comment: “Gentlemen. If you date a girl who goes to a class like this or dances like this, break up with her now. Find a woman who treats herself with more dignity and respect.”

Below him in the comments, there were several people trying to suggest to him that maybe, just maybe, sharing a soft porn video of women’s butts wasn’t a good way to teach men about chastity, but he kept doubling down. He even rebuked them for thinking of the sharing as a near occasion of sin, suggesting that people who objected had a mental health problem. He apparently thought he had no choice but to do this for the purpose of raising awareness. To hear him talk, there’s no way in the world to tell men to be chaste without sharing visual aids of the kind of impurity we should avoid, supposing for a moment that women’s aerobics classes which tone the buttocks are impure.

Somewhere in the comment thread there was also this fellow: 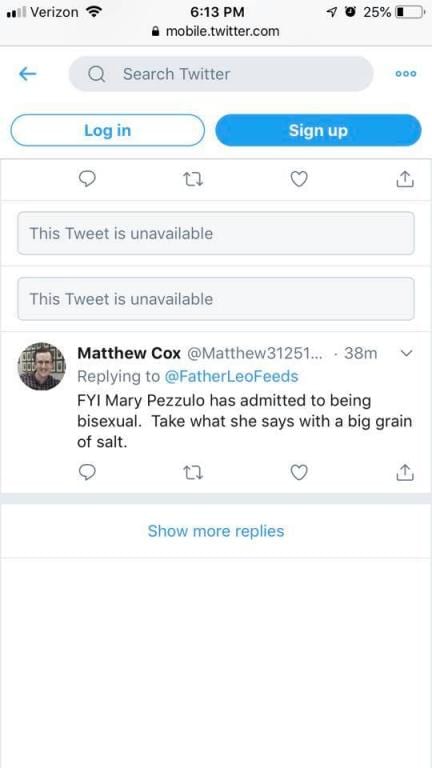 Yes, as I have publicly mentioned, I am attracted to both men and women, and I am monogamous with my lawful wedded husband whom I met at Franciscan University and married in the Catholic Church. Bisexuality is an orientation, not a sin. Only choices are sins, and desires aren’t choices. Matthew Cox, on the other hand, is something of an online stalker who has gleefully admitted to screenshotting my husband’s and my friends-only facebook posts when he friended us under an assumed name. But that’s another story. Back to this one.

In the comment thread, I also found a number of men saying they wanted to know where this aerobics class was being taught so they could watch– there was even one who said he’d marry a “good” girl but date one of these, for sex. When shamed, he doubled down as well.

I pointed this out to Father Leo, drawing his attention to the scummy men who were ogling the buttocks on his Twitter feed, and he said “Now you know who you need to be aware of … scummy men and women will always be among us … to not shine a light of truth on them only allows them to let their scumminess grow.” In other words, he equates women taking an aerobics class with motives unknown to him, to dirty men who want to have sex with certain women on the side while seeking out a “good girl” worthy of their respect. And he thinks this is an excuse to share a girly video, as if people couldn’t get the picture if he just described it to make his point.

And this is yet another example of why it’s a horrible mistake to teach young men to despise women who are behaving in a way you consider unchaste. Even beyond the fact that it’s grossly improper for a priest to share a video of butts on Twitter. It’s improper to phrase any pastoral advice for young men on their dating and sex lives, by shaming women and talking about women who don’t “respect themselves.” It’s wrong because it’s another way of objectifying women rather than respecting them as persons made in the image and likeness of God. And it’s also wrong because it’s not helpful. It doesn’t lead men to act chastely. It leads men to think that there are two castes of women: women you marry and women who aren’t worthy of respect– women with whom you must act chastely and vessels for them to be unchaste with.

God would have us respect everyone, no matter how that person appears.

Every woman is a human being, created in the image and likeness of God, and worthy of respect. Even if she does something genuinely unchaste, or is filmed in hot pants taking an aerobics class.

Each man owes all women, and his fellow men, the reverence he owes an icon. Yes, even if he can see their butts. I’m not saying women shouldn’t cover their butts, but even if we don’t, men still have to respect us.

The Catholic teaching on chastity, like our other teachings on how we are to treat our neighbor, stems from the belief that our neighbor is “another Christ” to us. We are to give them the reverence we would give Christ. That’s why we have laws against adultery and pornography, and all the other laws in our social teaching. One of the ways in which we treat people like another Christ is by not doing them the indignity of deliberately acting in a way that entices them to commit a sin, and that’s something we need to think about. I’m not saying these particular ladies were doing that, mind you, but if you ever find yourself in hot pants trying to convince someone to sin you ought to stop.

Even more importantly, we treat our neighbor like another Christ by trying to see and revere Christ in them, even when they’re not acting Christlike. I am remarkably bad at that. Most everyone is. May God have mercy on all sinners, of whom I am the first. But no matter how bad my example, what I’m saying is true. If you see someone whom you believe to be “not respecting herself,” that’s not an invitation for you to despise them as well. Particularly if you’re a priest disrespecting women by shaming them and being a near occasion for others.

People who don’t know this shouldn’t be teaching “gentlemen” about dating.

And that’s why I’m concerned with Father Leo. Because I found out recently that he’s the one who is going to give the keynote speech at the youth conference this year in the Diocese of Steubenville. Steubenville has gotten enough bad press for disrespect of women lately. I don’t think this is a prudent choice of theirs. Priests marketed as speakers to the youth need to know how to help the youth to be better, not give young men excuses to act like pigs.

People are good enough at that as it is. 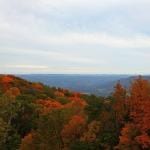 September 14, 2019
Bransfield, West Virginia, and the Tragedy of Greed
Next Post

September 18, 2019 If We Go To War Again
Recent Comments
0 | Leave a Comment
Browse Our Archives
Follow Us!