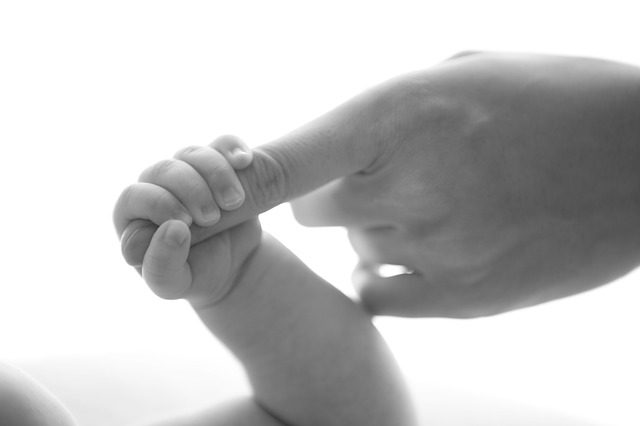 I know I said I’d get away from the topic of Abby Johnson’s public racist attack and its aftermath from last week. But I want to take a moment to give a shout-out to a pro-life organization that gets a lot less press and that has handled the situation beautifully: Rehumanize International.

Last week, shortly after Abby’s tantrum, Rehumanize International gave a brief announcement that a representative of Abby Johnson’s charity, “And Then There Were None,” would no longer be speaking on a panel on “leaving violent institutions” at their conference at Loyola University on the weekend of October Eighteenth. The new panel looks very good; it consists of a “Veteran for Peace” named Thad Crouch, a former executioner named Jerry Givens, and a former abortion clinic worker named Toni Turner. Ms. Turner is African-American.

This spurred a lot of speculation in which I myself participated, about whether Rehumanize International had shown Abby the door themselves. I assumed they had. It seems it wasn’t that simple.

Last night at about one o’clock in the morning Eastern time, I noticed that Abby had crashed Rehumanize’s facebook thread, responding to everybody except me over and over again with the same message that she had left voluntarily,  it was her choice, Rehumanize still worked with her. She posted a screengrab of an email that looked like it was part of a longer conversation but she said that was all there was to it. She was not believed: 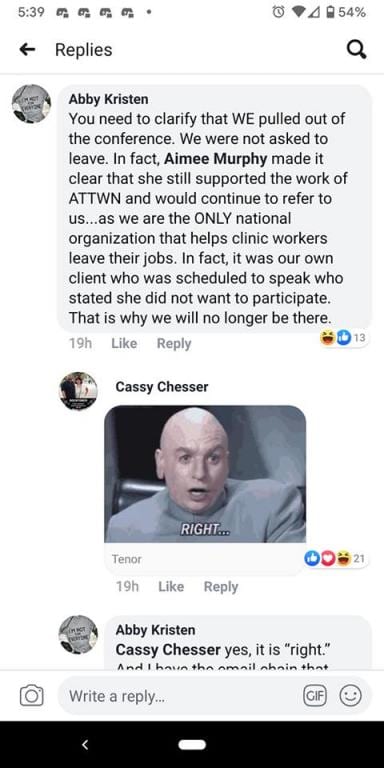 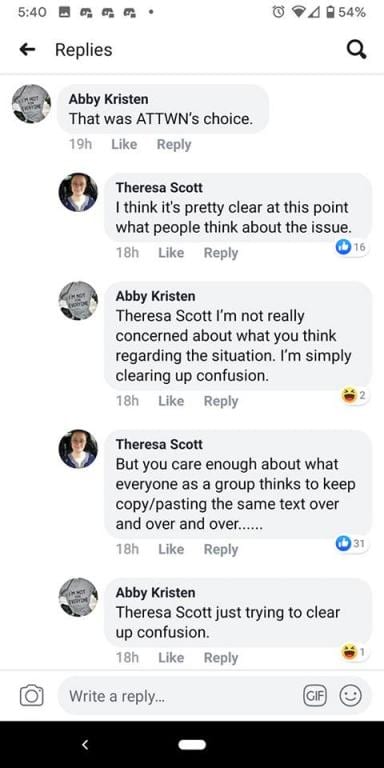 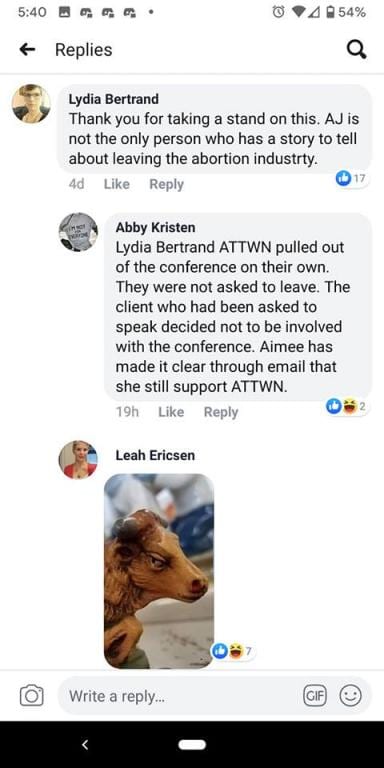 Since Abby was suddenly so very concerned with setting the record straight and making sure that people believed nothing but the Gospel truth, I asked if she was going to retract her public, deeply offensive libel against my friend Father Stephanos Pedrano. I’m also still concerned about the horrible racist insults she made against the pro-life Protestant Bishop Talbert Swan II, of course, but Swan is a public figure with quite a large platform who’s known for speaking for himself. Father Stephanos is just a quiet Benedictine monk. His reputation could take much more of a permanent hit if her completely unfounded statements go uncorrected– though the whole situation needs to be repented of and corrected, as publicly as the attacks were made in the first place. I asked her to retract, several times. So did quite a few more people on that thread, both friends of mine and people I’ve never met. Word gets around.

Abby’s only response was to react to one of my comments with a laughy face reaction, and then block me. I hope those of you who aren’t blocked will keep urging her to retract.

The next morning, Rehumanize International commented with the full story, which I quote here in its entirety:

Two weeks ago Abby Johnson initiated an exchange on Twitter with an African American pastor. As it stretched on, this thread developed from inappropriate remarks into dehumanizing insults wherein Abby repeatedly used racist rhetoric. Our team is committed to challenging racism wherever we find it — whether it be in elected officials, the abortion industry, or within our own ranks of the pro-life movement.

We have worked with And Then There Were None in the past many times, and our Executive Director Aimee Murphy considered Abby a friend, so she reached out privately to express concern about how Abby’s words hurt and continue to marginalize people of color, and potentially impact the perception and reach of her integral work to get clinic workers out of the violent abortion industry. Aimee discussed in her email what anti-racism means to us: that we are committed to upholding the dignity of people of color who have been marginalized by racism and prejudice; it means that we have the responsibility to fight racism wherever we see it, including and especially in ourselves.

Implicit bias can blind us to the ways that we participate in racism, white supremacy, and colorism. We may find racism in ourselves or those that we love and admire because we are all steeped in systemic structures of inequality. One person saying racist things doesn’t mean that they are inherently bad — nonetheless, the right thing to do when we encounter racism is to call it out and, in humility, to work to eradicate it within our sphere of influence.

In response to Aimee’s email as well as other anti-racist posts made by Rehumanize International team members, Abby and ATTWN informed us via email that they would be pulling out as a sponsor and would no longer be presenting at the upcoming Rehumanize Conference. Additionally, they let us know that Aimee’s offer to speak at the Pro-Life Women’s Conference on the Consistent Life Ethic has been rescinded, and that they were formally ending our collaborative effort to facilitate their Art Contest and Show for the PLWC.

In an effort to prevent any more hurt and to not encourage drama, we have remained hands off after announcing that there will be a change in the program. We apologize for any confusion this may have caused. Our team is running on fumes as we wrap up all of the final loose ends for our impending conference next weekend in New Orleans. Thank you for your patience during this time.

So there you have it. I was wrong in my assumption that Rehumanize had distanced themselves from Abby Johnson. All they did was post some anti-racism statements, and then their founder sent Abby a personal concerned email from a friend to a friend. Abby Johnson responded with her usual grace, throwing a hissy fit, taking her ball and going home. She withdrew her sponsorship of more than one of their projects, which I assume means Rehumanize will take a financial hit and be able to do less pro-life work. And all because Rehumanize made a statement against racism and contacted her privately. But I’m sure Abby’s first concern is the babies.

Abby could have looked like a martyr to her own disciples if she’d quietly taken Rehumanize’s statement about the new lineup on the chin, but she just had to get in there and correct the record, forcing Rehumanize to correct the record themselves in a poised and ladylike way, and now we know the rest of the story.

Also, somewhere in the threads I can’t find now because I’m blocked, Abby repeated the statement that New Wave Feminist, a group that actually did publicly distance themselves from her, had never ever publicly supported her or And Then There Were None in the first place. She said this last week as well, on a separate thread: 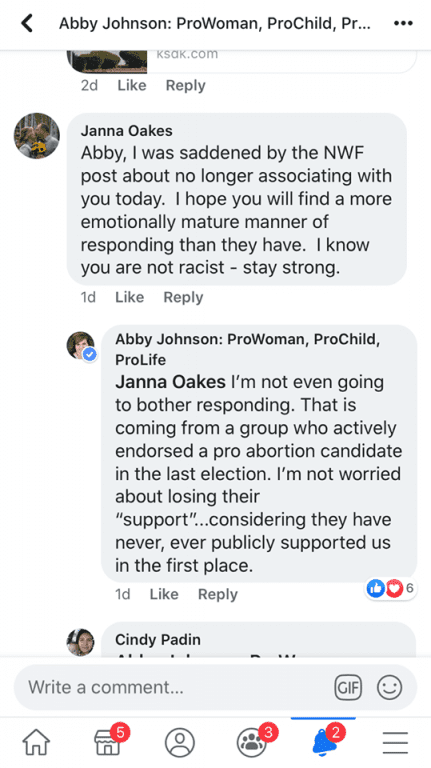 This is either a lie or a sign of a failing memory. Maybe Abby’s getting old. Here is a screenshot of New Wave Feminist publicly lauding And Then There Were None on their facebook page four months ago: 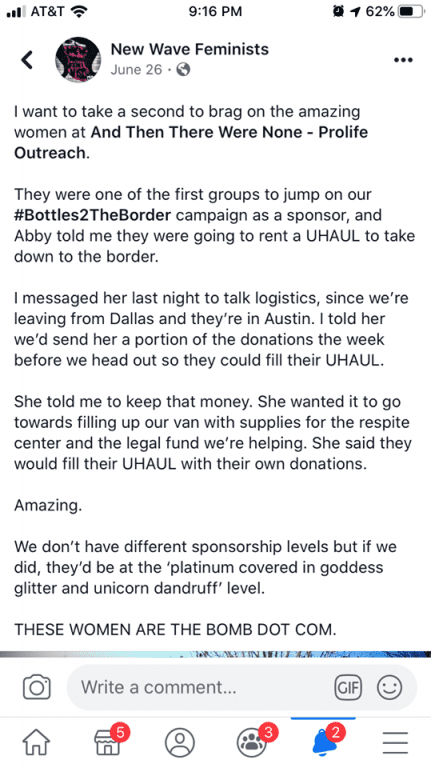 For someone who tells fibs as often as Abby has lately, you’d think she’d be good at it. First Father Stephanos and now this. I’m getting the impression she’s not very truthful.

In any case, if you would like to donate money to a pro-life organization that isn’t racist, please consider giving to Rehumanize International, a non-partisan organization which is pro-life, anti-euthanasia, anti-racist, pro-refugee, anti-capital punishment, and anti-war. I hope they get a huge crowd for their conference; I wish I could travel there myself, but I’m very excited to see how it turns out at any rate. You should also consider supporting New Wave Feminists, who have been trying to do the right thing as well all along.  And don’t forget the Family Life Campaign, a ministry of the Church of God in Christ which helps to combat abortion in African-American communities. That’s the church whose bishop Abby attacked, starting this whole chain of events. She seems to have assumed he couldn’t be pro-life.

There are many reasons to like these organizations better than And Then There Were None. For one thing, the first thing you get when you go to their websites is information on who they are and what they do. Whereas the first thing I got when I clicked on And Then There Were None’s website, was a giant pop-up selling copies of the Abby Johnson movie for 19 bucks a DVD and 29 bucks a Blue Ray. 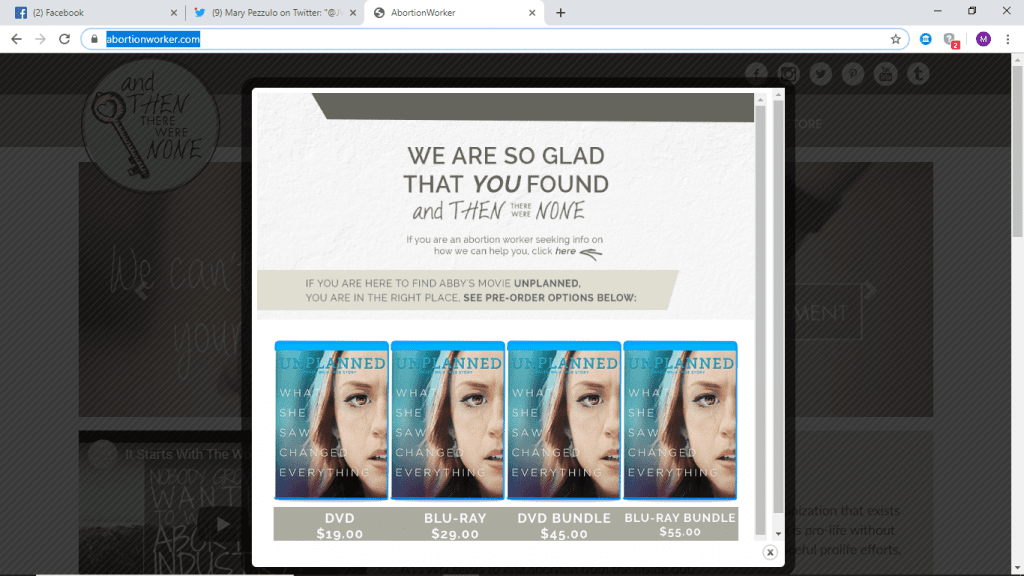 I’ll give my money to somebody I believe might be trustworthy.

And I recommend my readers do the same.

October 10, 2019
The Legacy of Trump is a Genocide
Next Post 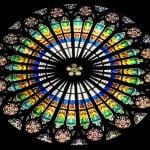 October 12, 2019 Angelus Through Glass
Recent Comments
0 | Leave a Comment
Browse Our Archives
get the latest from
Steel Magnificat
Sign up for our newsletter
POPULAR AT PATHEOS Catholic
1