Diocese of Amarillo: Pavone Not A Priest in Good Standing

Diocese of Amarillo: Pavone Not A Priest in Good Standing October 16, 2019 Mary Pezzulo

Yet again, I thought we were done talking about corruption in the pro-life movement for awhile. I have tried to praise innovative pro-life charities doing admirable things, like New Wave Feminists, the Family Life Campaign and Rehumanize International, whenever I can, but I always find myself writing about the old, mainstream pro-life movement’s many train wrecks as I go along.

Today I have to talk yet again about the granddaddy of the mainstream pro-life movement, Father Frank Pavone.

You may recall that I have been deeply disturbed by what appears to be rampant disrespect for corpses by Pavone and his charity, Priests for Life. I’ve been calling for accountability for this for years, but nothing has been done. Priests for Life is just about the most famous pro-life organization out there; it ought to be an exemplar of ethics, and by all accounts it isn’t. And as for Pavone, his antics have just gotten more disturbing since he used naked human remains as a prop for a political ad back in 2016.

On Instagram recently, someone asked Pavone if he still had “that dead baby stored,” and yesterday Pavone responded. Yesterday was Pregnancy and Infant Loss Awareness Day; many of my friends online were sharing heartrending stories along with solemn photos of ultrasounds and gravestones. It’s a difficult day for any parents who have been through such a horror. Pavone’s statement on Pregnancy and Infant Loss Awareness Day was: 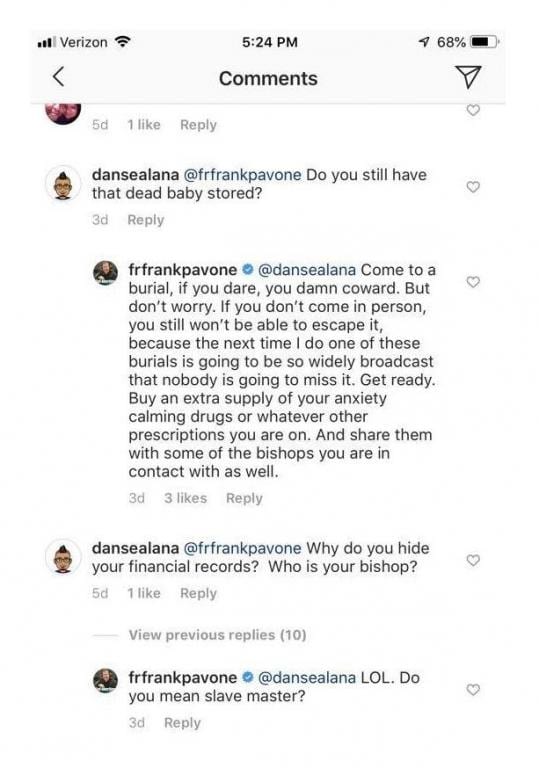 “Come to a burial, if you dare, you damn coward. But don’t worry. If you don’t come in person, you still won’t be able to escape it, because the next time I do one of these burials is going to be so widely broadcast that nobody is going to miss it. Get ready. Buy an extra supply of your anxiety calming drugs or whatever other prescriptions you are on. And share them with some of the bishops you are in contact with as well.”

This man claims that he counsels traumatized post-abortive women as one of his ministries. It’s one of the reasons people give him money. And on Pregnancy and Infant Loss Awareness Day, he chose to get online and mock the mentally ill, especially those who take anxiety medication, while promising a real rock-em sock-em bombastic unforgettable dead baby funeral.

I’m also a little concerned that he claims the burial will be “so widely broadcast that nobody will be able to miss it.” Pavone broadcasts in two places that I know of: on YouTube and on EWTN. An ordinary funeral on EWTN is not exactly going to seize the attention of the entire world; it’s barely even going to ping on the radar of the Rosary-praying grannies who make up EWTN’s audience. An ordinary funeral on YouTube won’t draw much attention either. Is Pavone planning some kind of publicity stunt to wow the secular press? Is he going to go over Niagara Falls in a barrel? Do people still do that?

I kid, but there’s actually nothing funny about this kind of behavior from a priest. Real people are being hurt. I’ve already spoken with one bereaved mother who lost a child in infancy who really has needed anxiety medication due to being triggered by Pavone’s stunt in 2016. Carrying on like this in public is simply dangerous, and here he’s publicly confessing to plotting another publicity stunt involving a corpse. Who’s going to get hurt this time?

This was the second time, to my knowledge, that Pavone has referred to the bishop who is supposed to be in authority over him as a “slave master;” it also happened a month ago when he and I spoke on Twitter before he emailed that burial certificate which he claimed proved that the infamous “Baby Choice” had been buried once and for all, although it only opened up more mysteries. Someone told him his bishop should require him to receive mental health treatment, and he said “I don’t believe in slave masters. Do you?”

I was frankly shocked that a priest in good standing would get away with saying nasty things like that about his bishop in public more than once. I wish I could be less jaded, and be shocked that a priest got away with the other things Pavone has done and still be a priest in good standing. But after the couple of years we’ve had in the Catholic Church, my capacity for shock is low. I apologize to the bishop of Amarillo for being such a cynic about his priorities. Still, a priest sassing a bishop like this sounds off limits.

So I called the Diocese of Amarillo. And they are the ones who told me that actually,  Pavone is NOT a priest in good standing in their diocese.

Those were the exact words: “Actually, no, he’s not.”

I asked if they’d had any press release about this and they could only direct me to the one from November 8, 2016 after the dirty naked fetus on the altar stunt, and there was also a terse statement in 2012 that Bishup Zurek grants him permission “in individual cases, based upon their merits, to participate in pro-life events with the provision that he and I must be in agreement beforehand as to his role and function. All other matters are outside the purview of this statement.” The deacon who spoke with me said “nothing has changed,” and he further said that that the Diocese of Amarillo will not give him a letter declaring him in good standing when he goes out of the diocese.

I was absolutely shocked at this, and I’m still having trouble believing it. But if calling the diocese wasn’t enough, a reader showed me Pavone’s own website where he proudly displays his celabret card, the card that show’s he’s allowed to say Mass outside the diocese. And the card displayed expired February 1, 2016. 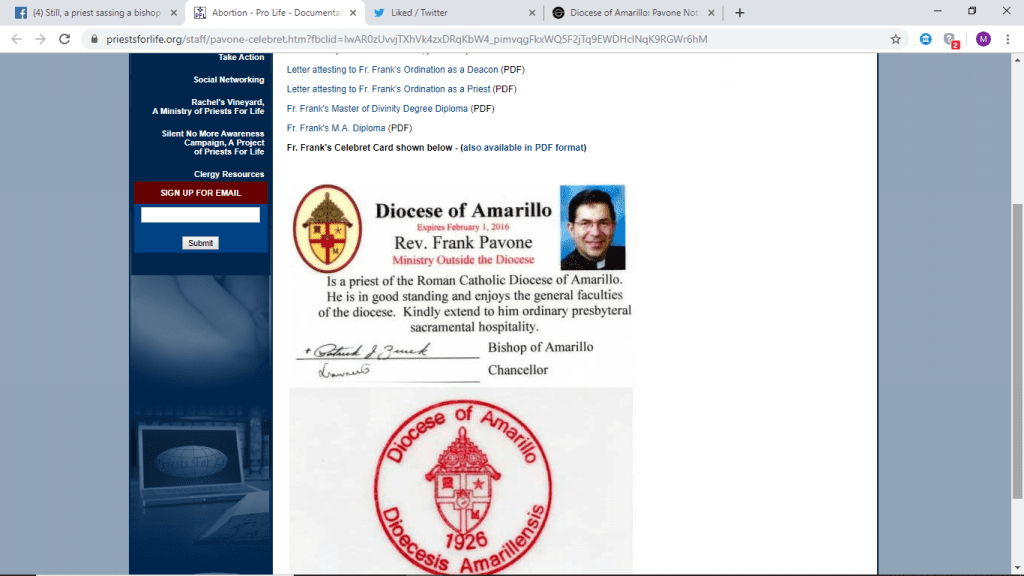 Now, this doesn’t mean he has no priestly faculties; this isn’t like the McCarrick situation or like when Pavone was suspended several years ago. He’s still a priest. But it isn’t a small matter either. As I’ve been given to understand, a priest who doesn’t have a letter declaring him in good standing isn’t allowed to say or con-celebrate public Masses outside their diocese, for example, and if they do it may be a valid sacrament but illicit. And as far as I can tell, since Priests for Life is located in Florida now, he’s always outside of the Amarillo diocese. In fact, here’s an article about him celebrating Mass in Pennsylvania on September 20th of this year. Why? Why didn’t the Shrine of Our Lady of Czestochowa ask to see his letter declaring him in good standing? Did they just not think to ask?

So, I guess everyone can stop calling the diocese of Amarillo.

Pavone is AWOL and openly mocking the notion of being under the authority of any bishop. Amarillo won’t give him a letter declaring him in good standing.

Charity Navigator only rates Priests for Life two stars, due to their lack of accountability and transparency– compared with four stars for Pro-life Across America and the Life Legal Defense Fund, so it’s not just that Charity Navigator doesn’t like pro-life charities.

As I documented in my previous post on him, we have some pretty compelling photographic evidence which Pavone himself has been releasing to the public all along, that he’s not burying the corpses he’s entrusted with in a timely fashion.

He spends his time on Twitter ranting about gun rights and approving the abuse of immigrant children.

And here he is mocking the mentally ill while promising another deeply traumatic  publicity stunt with his macabre parade of infant corpses in the near future.

I think we as lay people are running out of options for what to do about him.

At minimum, everyone needs to stop giving him money.

October 15, 2019
A Faithful Catholic Priest is Under Attack
Next Post 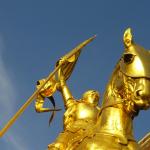 October 17, 2019 Rosie Wins a Battle
Recent Comments
0 | Leave a Comment
Browse Our Archives
get the latest from
Steel Magnificat
Sign up for our newsletter
POPULAR AT PATHEOS Catholic
1

Catholic
It's Orwellian, But Not The Way You Think
Steel Magnificat