The Parable of the Maple on Ascension Day

The Parable of the Maple on Ascension Day May 24, 2020 Mary Pezzulo 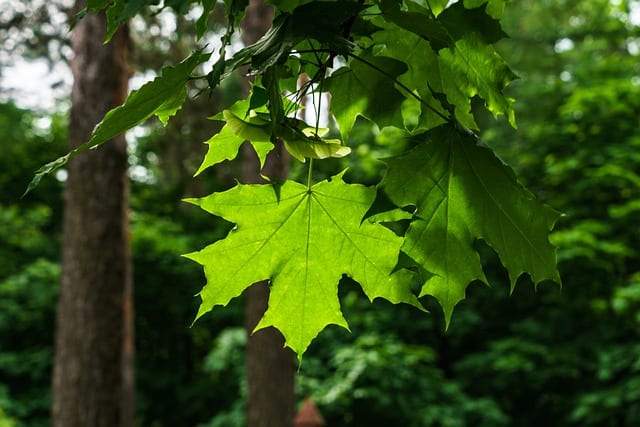 I don’t know where the maple tree was, originally.

There must have been a venerable old maple tree on this property, at one time. There’s nothing left of it now– no stump, no indentation where a stump once was. But there are an irritating number of saplings.

Around the house, in all the cracks in the concrete, maple trees spring up every year. There’s one by the side door, one by the porch steps, one in the flowerbed, two or three in various places as I walk around the house with my gardening things. Every year we cut them back to the stump. Every time Michael mows, he cuts them back with the weed eater. But they return. The one by the porch steps had a thick crop of poison ivy coiled around it and climbing the porch when I moved in. I did what I’d never done in my life before and bought the smallest bottle of Roundup to spray the poison ivy– just the poison ivy, keeping it away from my garden and my dandelions. The chemical stench was awful. I felt like a murderer because I never use poison on weeds. The poison ivy shriveled and died back, and I ripped out the dead twigs wearing gloves. I felt sorry for the maple tree the poison ivy was entangled with. The tree also shriveled and died. But the next growing season, it was back.

There was a short, skinny maple sapling growing near the trunk of a scrubby cedar bush in the front yard when we moved in, over five years ago. It grew faster than I can describe, and now there’s a skinny tree shading the porch just as the cedar bush shades the porch. The seed pods, the “maple keys” or “whirlybirds” or “helicopters” that hold the seeds, fall and litter the porch roof; they blow into my window when I keep it open for air. I assume some of those will grow new saplings after we’ve moved out, and they’ll be the next tenant’s problem.

All of these saplings must have grown from maple keys dropped from an older maple tree that was somewhere nearby, but there’s no maple tree older than the upstart sapling by the porch anywhere I can see. There are sycamores and cedar bushes. There are magnolias. There are smelly walnuts. A neighbor down the block has a weeping willow that’s probably got its roots entangled in the storm drain by this time. But I don’t see a big maple.

This is the kind of thing I consider while I’m gardening.

Rosie was out in the wading pool all day yesterday. We threaded the garden hose from the kitchen sink, through the window over the compost heap and across the yard to fill her pool. Our neighbor with the perfect lawn sat on her back porch glaring at us, snarling under her breath as if we were contemptible pigs, and we are. There’s noting respectable about a Pezzulo. Pezzulos are the most ridiculous, tawdry, unsightly creatures the Lord ever created. Rosie frolicked and splashed in the cold water for hours in her ill-fitting bathing suit from last year. She played with squirt guns and ended up saving me a lot of work irrigating the vegetables. She made mud out of the bucket potato garden and nearly ruined the carrots.

I pulled weeds. I tended the cucumber seedlings a friend gave me and fussed over the squash. Only one of the squash seedlings I started is still alive– the other of the two that survived the frost keeled over for no reason after I put it in the ground, but the last one seems to be taking to the soil. I also found a single healthy squash for sale at Rural King and, after I’d abandoned all hope, I found one at Wal Mart. It’s not a fussy organic heirloom and it’s not the zucchini I wanted but a crookneck summer squash, but it will do.

I didn’t have beer for a slug trap, but I had an army of slugs attacking my kale, so I filled the traps with sugar water and yeast to see if it would do the trick. The yeast bubbled up like a volcano in slow motion.

There is no reason that plants should grow just because I put them in the ground. It’s almost against logic that they would. There are so many obstacles to their growing– slugs, weeds, inclement weather, rampaging children, angry neighbors, my own ineptness. But they do grow, and they feed me and my friends.

There is no reason a creature as helpless as a Mary Pezzulo still exists. I’ve had so many scrapes and brushes with death. But I am here, filling the pool, caring for my daughter, growing things.

I can’t see the reason why, but I am here.

Today, Sunday, in this diocese, we remember the ascension of Christ into Heaven. One minute Christ was here, standing outside the gate with the apostles, and He blessed them, and as He was blessing them, the blessing still ongoing, the blessing never coming to an end, He went up to Heaven and was taken from their sight, and the angels told the apostles not to look at the sky anymore.

He ascended as the Head of a Body that still remains, being drawn up into Heaven, part of it still on Earth but not of the earth. That Body is the Church. She is a painful, messy, broken Body, a Body who doesn’t look viable. So many members of the Body have become traitors and attacked the other Members until Christ is in agonizing pain, but the Body remains, and the Body is somehow still alive, and we believe through the virtue of hope that any of us who truly wants to follow Christ will eventually arrive in Heaven where He went.

We believe that, somehow, He also remains present with us and in us, always, even until the end of the age.

We can’t see the Tree anymore. It’s gone from our sight without a trace. There are plenty who would tell us that the Tree was only a story, and we’re fools to hold onto His memory. There are mocking detractors who shake their heads at the bleeding, autoimmune nightmare of a Body He left behind, and say that our hope is in vain.

But we know the Tree was once here. We know because we can see the army of scrawny, unsightly saplings rising up year after year, no matter what. No matter how much we are poisoned and cut down, we remain.

And I remain one Body with the Tree.

May 26, 2020 A Requiem for a Hundred Thousand
Recent Comments
0 | Leave a Comment
Browse Our Archives
get the latest from
Steel Magnificat
Sign up for our newsletter
POPULAR AT PATHEOS Catholic
1