What if we Re-Thought the Pro-Life Movement?

What if we Re-Thought the Pro-Life Movement? July 6, 2020 Mary Pezzulo

I thought it would make bigger news this weekend, when pro-life icon Abby Johnson said that her son isn’t Black after all.

In case you just joined us: the Johnsons had an open adoption several years ago. They adopted a baby named Jude whom they’ve spoken and blogged publicly about and posted several photos online. Jude is said to be biracial, and happens to have light brown skin. Abby has several times said on social media that she has a “black son” and therefore can’t be racist. She uses those words specifically; the last time she used them that I can see was May 29th of this year. Last week, she posted a horrendous video rant to YouTube entitled “my biracial boy,” where she talks about her son as “brown, very brown, looks like he has a tan” and that means he’ll grow up to be “intimidating maybe” unlike her white children, and that it would be smart of the police to racially profile her biracial son. And then she went on a fifteen-minute tangent about how “bad dads” were responsible for every woe in the Black community and Black women consenting to have babies with abandoning Black fathers were causing all the trouble and this was the only issue that Black people were allowed to protest and write about. The video was subsequently deleted, but she’s only doubled down.

And finally, a couple of days ago, in a shocking turnaround, she declared, “my son isn’t black.”

Yes, I have screenshots, which were elegantly made into a collage by Melinda Ribnek in order to get the point across a little more clearly: 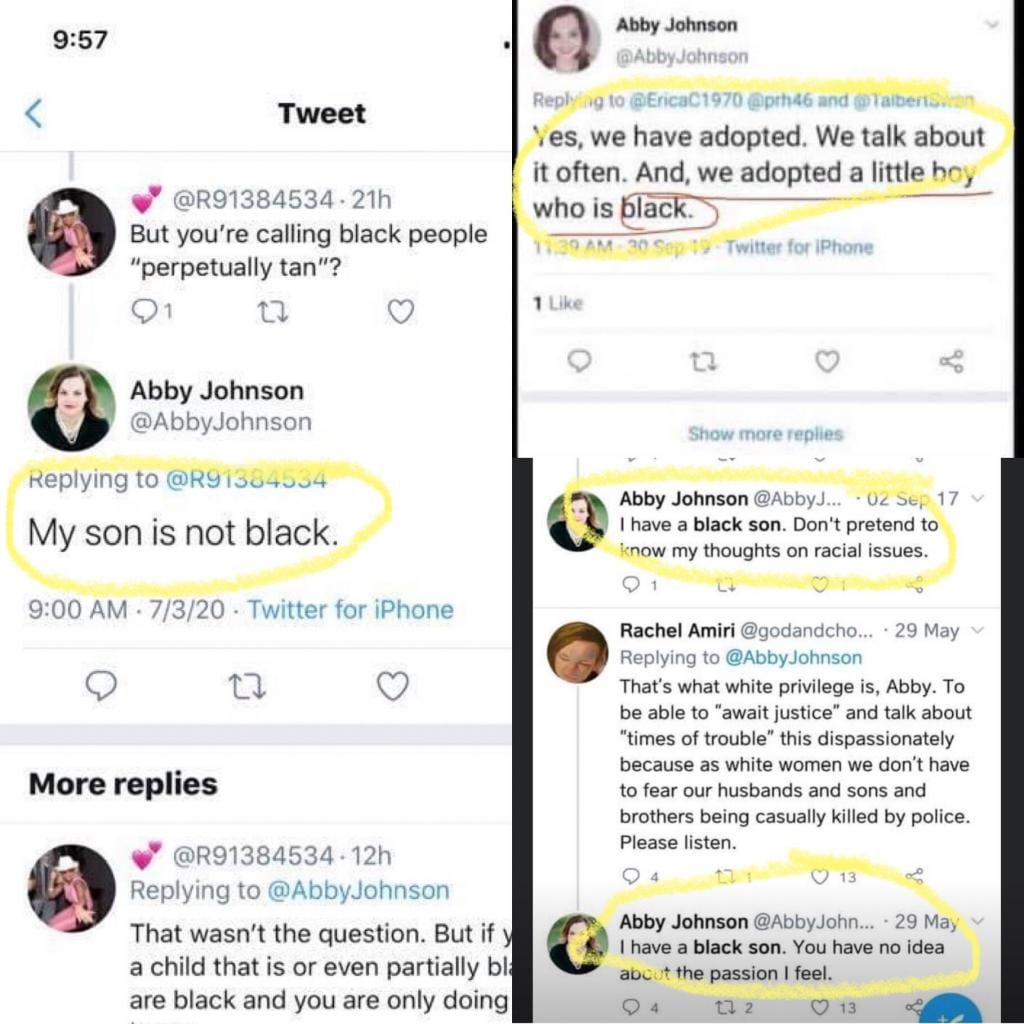 I don’t really care which of Abby’s irreconcilable statements were lies, I just care that she’s exploiting her adopted son’s race in order to score racist points, in public. If she wanted to make a racist video, she could have done it without using her son as a prop and bringing his race and gratuitous references to his “brownness” into it. She chose to call the video “my biracial boy” and make it about Jude. She chooses to bring him up whenever anybody questions her about her racist views. And she chooses to backtrack on her son’s race when it’s convenient– though why, exactly, it’s convenient in this context, I don’t know. 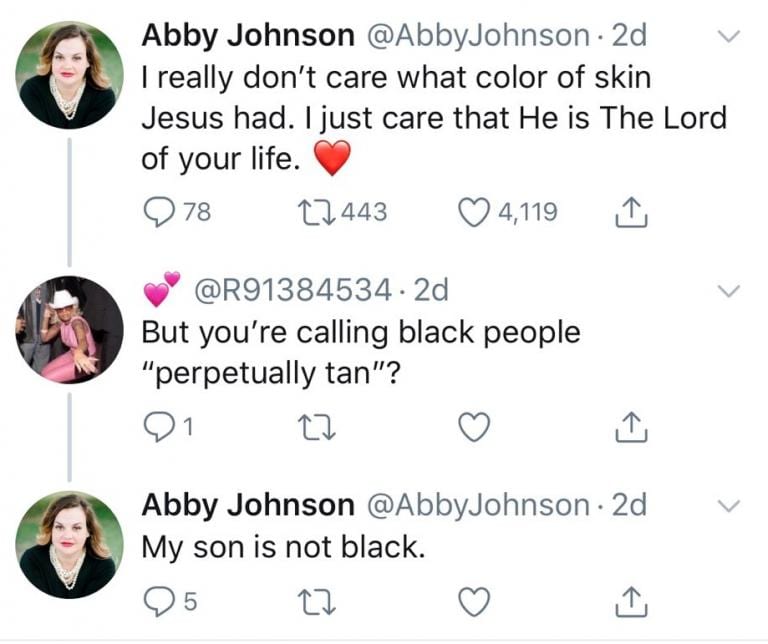 I care about the horrific psychological effect that this will have on her child growing up.

And I also care that pro-lifers are still in denial. I have seen so many people offended that we’d speak out against Abby’s lies and racism. They say we shouldn’t be divided, that what she says about racism doesn’t matter even though the issues of racism and abortion are always linked in this country. Abby “dedicated her life to saving unborn babies,” therefore she’s beyond reproach.

It’s similar to the attacks I get when I write about the infamous Frank Pavone, his cruelty, his apparent unspeakable liberties with the corpses of babies, and his canonical status.  He dedicated his life to ending abortion,  or at least that’s what he claims he’s doing, therefore we have to tolerate everything else.

It’s similar to the pushback I got when I dared to listen to the actual words coming out of Norma McCorvey’s own mouth, when she owned up to lying about her conversion to the pro-life movement. I was told I wasn’t allowed to believe her when she said what they didn’t want to hear. I was only allowed to believe her when she said pro-life things. Everything else is obviously a fraud created by sinister film editing practices, because it doesn’t agree with what the pro-life movement wants.

It’s beyond parody at this point but I want to parody it anyway. “Sure it’s fake news. We believe Norma McCorvey on the side of her split personality that affirms our side. We believe Abby Johnson even when investigative reporting transparently shows that her “conversion” likely didn’t happen the way she said. We believe Frank Pavone when he claims he just happens to have multiple identical baby corpses with identical bruising in identical little caskets and seems to change the story on how he got them and how soon they were buried every so often. We believe that Donald Trump is actually against abortion and has never paid a wife or mistress to have one. We believe that, after we give the GOP every single thing they want, they’ll finally keep their promise and get around to legally banning abortion. We believe that all we need is just one more Republican-appointed Supreme Court Justice, okay another one, okay still one more. We believe that Mike Scanlan wasn’t a grifter even when Franciscan University students testify that he covered for their sexual abuser. We believe the moon is made of cheese. We believe the earth is made of chocolate. We believe that this deed we just received to a nice beachfront property in Arizona is the key to our prosperous retirement. We are the pro-life movement, and we believe.”

What if we didn’t?

Seriously, what if we just said “No?”

What if we all stopped putting up with all of this?

What if we who value life from conception until natural death took all of this money and all of this time and effort and emotion we’ve spent propping up big-budget pro-life loudmouths and politicians who are monsters, and just used all those resources to help people? Help moms? Help babies? What if we built pregnancy centers that aren’t “fake clinics” where you pee in a paper cup and get lectured out of abortion but real medical centers with good doctors that gave women everything they need so they never felt they had to go to Planned Parenthood? Some of those exist, but we need lots and lots more and they’re expensive. What if every time a woman felt like she had to choose abortion because she was being abused by a partner, she could find a refuge to go to because the resources were in place? What if every time a mother felt she had to have an abortion for financial reasons, the finances were in place to help her because we didn’t waste them on talking heads but just helped every low-income woman in our community?

What if everyone who tried to exploit the pro-life movement to become a celebrity and spout racist or other horrendously sinful nonsense was shut down, because we cared more about helping people than about supporting figureheads?

Can you imagine what a consistent life ethic would look like?

And it doesn’t look like what we have now.

July 6, 2020
Purity, Rape and the Feast Of Maria Goretti (again)
Next Post

July 7, 2020 The Hero of Somebody's Story
Recent Comments
0 | Leave a Comment
"Scripture also says "Woe to the false shepherds," and has rather a lot to say ..."
Erica Yet Another Take on The Pillar ..."
"We had a retired priest substitute this weekend, and you really never know when it ..."
Erica Miracle of the Loaves
"Backing a trailer is tricky at first, but can be learned with practice. I'm glad ..."
Illithid Newburg Landing
"Abbreviations easily turn into jargon which precludes or at least complicates dialog. Sometimes people use ..."
Ⓔⓢⓣ⋅Ⓠⓤⓞⓓ⋅Ⓔⓢⓣ Yet Another Take on The Pillar ..."
Browse Our Archives
get the latest from
Steel Magnificat
Sign up for our newsletter
POPULAR AT PATHEOS Catholic
1