The Font Was Also Christ 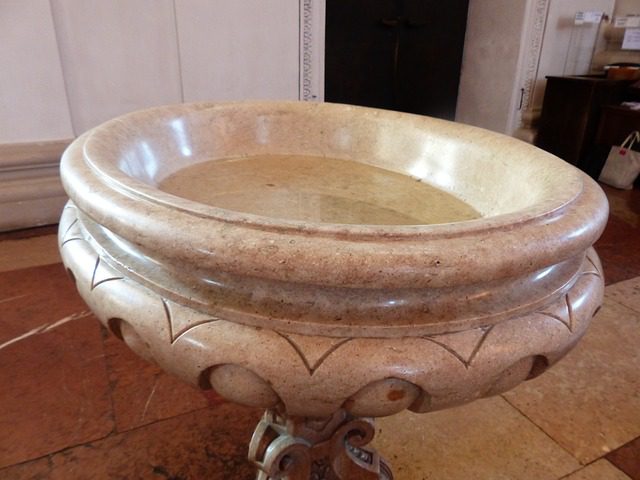 I went to Mass at the cathedral, for the first time in decades.

Saint Joseph Cathedral wasn’t our regular parish for most of my childhood, but it was the first five years or so. Some of my earlier memories are of being slung over the gray shoulder of my father’s Sunday suit, staring up at the frowning mouths of the organ pipes and the plaster statue of Saint Anne behind our usual pew. I had a vivid memory of asking if Saint Anne’s daughter, also called Mary, had yellow hair like mine, and my father said it was actually dark.

I was baptized in that church.

We sat under the window depicting the death of a suspiciously Caucasian-looking Saint Joseph, attended by Mary and a nearly blond Jesus. I hadn’t thought of that tableau for the longest time. I remembered the sandiness of the stone pillars, the mysterious undercroft and the reconciliation room, Saint Anne and the organ pipes, but I hadn’t thought about this window. As I gazed, I felt a shudder of memory. I used to look at this window when I was a tiny child, and think about being held by Jesus and Mary.

When Mass began there was only one altar server, an adult woman processing before the priest with the crucifix. She was a little younger than me, a Black woman with short hair and reverent eyes over her mask.

I wondered at this. I haven’t been back to Columbus since I visited in 2008. I don’t think there’s a female altar server in any Catholic church in Steubenville, not even the very modern ones. A female altar server was something that used to be normal to me but is now strange.

The music was beautiful, rolling out of all the frowning mouths of that great big organ. I kept glancing back over at the pipes. I think it’s a different organ than the one they had in the late eighties, when I went to church backwards over my father’s shoulder.

The readings were especially beautiful, thanks to an older gray-haired woman in a black dress who delivered them with a confident theatrical voice and an accent I couldn’t place. “Indeed someone might say, “You have faith and I have works.” Demonstrate your faith to me without works, and I will demonstrate my faith to you from my works.”

The Gospel was all about Simon Peter declaring Jesus the Christ one minute and trying to get Him to back out of it the next. Simon Peter didn’t understand that Christ wanted to save His people from all kinds of trouble, not just the trouble that Simon Peter had in mind. Christ was so much more than Peter thought. Trouble is so much deeper than Peter could imagine. Trouble is so deep, Christ descended into hell to lift us out.
I’m told that when He descended into hell he brought back His foster father, Joseph, and all His ancestors who were waiting there. I’m told He even reached back in time to protect His mother Mary from original sin, through the death that Simon Peter didn’t want Him to die.
There was a theatrical reading of the Prayers of the Faithful, and more beautiful music at the offertory. There was the usual Eucharistic prayer. And then it was time for Holy Communion.
Two ushers, a white man about my age and a Black woman who was older, nudged me and told me what to do for Holy Communion. I had to go to the front for the special ciborium with the low-gluten Host.
When I got there, the ciborium was being held by the female altar server with the reverent eyes, who was also an extraordinary minister of Holy Communion. She was up on the steps between the other eucharistic ministers but a little higher, like the Virgin Mary on a pedestal between two saints in a Renaissance painting.
She didn’t look like the Virgin Mary to me, though. She looked like Christ.
I don’t know why, but when I looked at her holding up the Host, all I could see was the Risen Christ. When I gazed into her eyes and said “amen,” all I could think was that I was saying Amen to Christ and nobody but Christ.
Everyone you meet is really Christ, of course, but we don’t often see it like that.
Christ put the Host in my hand. I prefer to receive on the tongue due to scruples about crumbs, but I’ve been receiving on the hand because of the virus, as an added precaution to keep people safe. Sometimes Christ demands you do something that agree with your scruples, in order to practice real charity. Christ is so much more than you or I or Simon Peter can imagine.
Christ processed back out with the crucifix after Mass, and then the organist began a postlude so enormous I think it shook the sandstone walls.
I wonder how many times I have failed to see Christ, because of “traditional” Catholic misogyny blinding me, or because I foolishly expected Him to look like me, or because I expected Him to be older or younger or not have an accent, or because I was being scrupulous to keep from offending Him.
Lord, when did I see You?
In all these years since I died and rose with You in the font at Saint Joseph’s Cathedral, how many thousands of times did I see You and not say “Amen?”
You were so much more than I knew.
After Mass, I saw that the Baptismal font was open with a little bowl of water inside. I dipped my hand and blessed myself.
“I was baptized right here almost thirty-seven years ago!” I said to the nearest person, who happened to be the older female usher.
“Thirty-seven years ago?” marveled the usher as if I’d said a thousand years. She had a different accent I couldn’t place, maybe Caribbean. “That’s WORTH a blessing!”
And she, too, dipped her hand in the font and made the Sign of the Cross.
The font was also Christ, in a way– the Water I went down into in the name of the Father, the Son and the Holy Spirit, and came out a New Creation.
I stepped outside in the yellow brightness of a September evening sun, happier than I’ve been in so long.
For a moment, I could see Him everywhere. 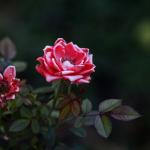 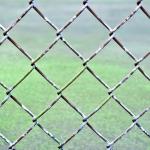 September 13, 2021 A Trip Back to School
Recent Comments
0 | Leave a Comment
Browse Our Archives
get the latest updates from
Steel Magnificat
and the Patheos
Catholic
Channel
POPULAR AT PATHEOS Catholic
1