Did Donald Trump Instruct Michael Cohen to Lie to Congress?

You know, I think the word “bombshell” is tossed around a bit freely in this business. In particular, some seemingly big political story hits, regarding matters of hidden intrigue or possible criminal activity in the highest offices of government, only to fizzle out to nothing.

Bombshells are supposed to hit and then rock the foundations of the political structure, right?

We’ve had a few, genuine bombshells in my lifetime, although it seems the occurrences are fewer and fewer, given the tribal nature of politics, these days. When something that should blow up hits, on one side of the political aisle or the other, the affected tribe will circle the wagons, in an attempt to lessen the blow.

The media is no help. They’re as hopelessly partisan and divided as our politicians. They’ll downplay, or even bury any story that is inconvenient to their particular political bent.

On the other hand, some rush to tag a story as a “bombshell” before all the facts are in, only to see it unravel and amount to nothing.

With that said, I’m going to go ahead and call this Buzzfeed scoop a bombshell.

If substantiated, it absolutely should be, because we’re in impeachment territory, now.

According to Buzzfeed News, two federal law enforcement officials have confirmed that their investigation shows that not only did Donald Trump direct his then-attorney and “fixer,” Michael Cohen to orchestrate the Trump Tower Moscow deal with the Kremlin, but he further instructed him to lie to Congress about it.

In November 2018 Cohen admitted in court to lying about the Trump Tower Moscow deal in his testimony before two separate congressional intelligence committees.

Not only did he lie, but he said that Trump, as well as the older Trump children were aware and informed.

What he didn’t say at that time was that it was Trump who instructed him to lie about it. Sources say he was told by Trump to say negotiations ended much earlier than they did.

Trump also supported a plan, set up by Cohen, to visit Russia during the presidential campaign, in order to personally meet President Vladimir Putin and jump-start the tower negotiations. “Make it happen,” the sources said Trump told Cohen.

And even as Trump told the public he had no business deals with Russia, the sources said Trump and his children Ivanka and Donald Trump Jr. received regular, detailed updates about the real estate development from Cohen, whom they put in charge of the project.

So this is where I remind everyone of President Trump’s private huddles with Vladimir Putin, and how no one in his administration knows what was discussed, because Trump confiscates any notes, in order to keep that from happening.

All of this points to a compromised president, in some way.

Even if those private huddles are nothing more than his begging Putin to let him build a Trump Tower in Moscow, that’s still a dereliction of his duties as president.

The sources in this new report say that behind the scenes of the 2016 presidential campaign, even as he publicly claimed to have no business with Russia, Trump and Cohen met for at least 10 face-to-face meetings, to talk about the deal that would have raked in over $300 million in profits for the Trump Organization.

Trump has previously blown this off by saying he could have easily lost the election, so he saw no problem with continuing to run his business, in the meantime.

He never intended to win.

BuzzFeed News first reported last year that Cohen and an associate, Felix Sater, had continued working on Trump Tower Moscow through June 2016. Sater communicated with Russian bankers, developers, and officials connected to the Kremlin. That revelation was confirmed in Mueller’s filings against Cohen in court last November.

Attorneys close to the administration helped Cohen prepare his testimony and draft his statement to the Senate panel, the sources said. The sources did not say who the attorneys were or whether they were part of the White House counsel’s staff, and did not present evidence that the lawyers knew the statements would be false.

BuzzFeed News has previously reported that text messages and emails show Sater — a real estate developer, convicted stock swindler, and longtime asset for US government intelligence agencies — worked furiously to arrange a trip for Cohen to the St. Petersburg International Economic Forum, where he was supposed to meet with top Russian bankers and government officials. Cohen told Sater that to advance the deal, Trump himself would also go to Russia, after the Republican National Convention in July 2016.

Sources are saying, however, that there are witness statements, as well as internal documents (think: emails, memos) that are expanding the picture of this deal, and just how deep the involvement is of Trump’s children.

So how deep was that involvement?

Ivanka Trump was slated to manage a spa at the tower and personally recommended an architect. She also instructed Cohen to speak with a Russian athlete who offered “synergy on a government level” to get the Moscow project off the ground, in another aspect of the deal first revealed by BuzzFeed News that later was affirmed by the special counsel’s sentencing memo. Cohen rebuffed the athlete’s proposal, which angered Ivanka Trump, according to emails reviewed by BuzzFeed News.

This is news we’ve heard before, and it doesn’t sound like “minimal” involvement, as Ivanka Trump’s people are claiming now.

Donald Trump Jr., meanwhile, testified to the Senate Judiciary Committee on Sept. 7, 2017, that he was only “peripherally aware” of the plan to build a tower in Moscow. “Most of my knowledge has been gained since as it relates to hearing about it over the last few weeks.”

The two law enforcement sources disputed this characterization and said that he and Cohen had multiple, detailed conversations on this subject during the campaign.

So while this is all recap, at this point, don’t miss what is hovering over this all: Donald Trump instructed Michael Cohen to lie to Congress, in order to cover up his dealings with a hostile foreign power, as he was set to become President of the United States.

If proven true, he came into office compromised by his dealings with that foreign power. He also sought to obstruct an investigation by instructing a subordinate to give false testimony.

Cohen will be giving public testimony on February 7 before the House Committee on Oversight and Government Reform, now in Democrat hands.

Trump’s defenders are excitedly pointing to the fact that Cohen is a convicted felon, at this point, so he is not credible.

The facts are, however, he has nothing left to lose by telling the truth.

We’ll see if anyone asks the question: Did Donald Trump instruct you to lie to Congress?

Then we wait and watch.

January 17, 2019
Michael Cohen's Odd Arrangement to Have a Company Rig Polls for Trump
Next Post 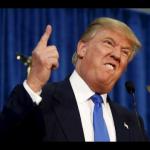 January 18, 2019 Trump's "Major Announcement" Is a Distraction
Recent Comments
6 Comments | Leave a Comment
"First, Susan, hope you're okay as been a bit since last update.Second, we see the ..."
Michael Weyer Reopening During a Pandemic: Is it ..."
"You should have the IRS give you tax exempt status. The order of Trumpianity definitely ..."
Daniel Ramos Riding Out the Blue Wave
"Hi Daniel good to hear from you again and I hope all is well with ..."
The Blue Tail Gadfly Riding Out the Blue Wave
"Gadfly my chum, your intellect and conservative adherence is a welcome oasis from the mental ..."
Daniel Ramos Riding Out the Blue Wave
Browse Our Archives
Follow Us!