Trump Breathes Blasphemy, so Where Is the Righteous Anger?

Trump Breathes Blasphemy, so Where Is the Righteous Anger? August 22, 2019 Susan Wright

Matthew 24:4-5 (AMP) – 4 Jesus answered, “Be careful that no one misleads you [deceiving you and leading you into error]. 5 For many will come in My name [misusing it, and appropriating the strength of the name which belongs to Me], saying, ‘I am the Christ (the Messiah, the Anointed),’ and they will mislead many.

I don’t like to automatically ascribe doomsday scenarios to every ludicrous, stupid thing said by politicians – especially not the current reprobate-in-chief – but given the fervent cult-vibe of Trumpism, Wednesday’s events at least require our attention.

To get a better feel for what has happened, we have to look at President Trump’s week.

Earlier, he huffed that those of the American-Jewish community who voted Democrat were “disloyal.”

Who are they disloyal to? Israel? The United States? Donald Trump?

According to the president, that disloyalty is to Israel, suggesting that American Jews have “split loyalties.” This is no small thing, considering how often the Jewish community is accused of that very thing by those who tend to have a bias against Israel and the Jewish people.

We’re not quite sure what goes on in that bag of cats that run wild through Trump’s brain, but either way, it was an insulting thing to say.

But he wasn’t done…

As we’ve seen, all too often, when this president is called out for doing something utterly asinine, his defenders will ooze out of the woodwork to defend him, at all costs.

Root saw the need to defend his liege against those who protested the smear against the American Jewish community.

With the unbridled passion of a true religious zealot, Root blasted a proclamation of faith to the world. The message was received.

In fact, with his complex on full display, Trump tweeted out Root’s praise, thanking him for the offering laid on the altar.

“They love him like he is the second coming of God…But American Jews don’t know him or like him. They don’t even know what they’re doing or saying anymore. It makes no sense!”

“But that’s OK, if he keeps doing what he’s doing, he’s good for all Jews, Blacks, Gays, everyone. And importantly, he’s good for everyone in America who wants a job.”

The emphasis there is mine.

Mr. Trump added his own comment at the end: “Wow!”

Later in the day, this vulgar heretic even looked to the sky and referred to himself as “the chosen one.”

So let me go ahead and say what others may be saying to themselves:

Yes. He may, indeed, be chosen by God. What, however, was he chosen for?

Could it be to punish a nation that has turned so far from God, with a church that has failed to be the hands and feet, looking to political saviors, rather than being the salt and light we’re called to be?

It’s possible, but American evangelicals don’t seem to be grasping any other possibility, except that Donald Trump is God’s divine promise, and that’s incredibly disturbing.

What Donald Trump did by thanking Root and promoting his heresy was to put himself at the same level as Jesus Christ.

We continue to hear about the godliness of Trump from his defenders, like Robert Jeffress and Franklin Graham, Jr, but will they call this out, or will they ignore it, for the sake of political expediency?

You can bet that if a Democrat had retweeted that he was the King of Israel and the “second coming of God,” every pulpit in the nation would be feeling the heat of the fire and brimstone sermons offered up.

To date, I’ve seen nothing to dispute Root or Trump’s claim of his divine nature from any of the prominent faith leaders. To be honest, however, the past three years have taught me not to expect these white washed tombs to do or say anything that rebukes their political messiah.

What I expect to hear is that Trump was merely repeating something someone else said, and therefore, is free of any guilt.

I expect to hear Franklin Graham or Jerry Falwell Jr. equivocate about how supporters of Barack Obama referred to him as “the one.”

They would be correct in pointing that out. It was one of the more disgusting episodes in eight years under the liberal Obama regime.

At no point, however, do I recall Barack Obama publicly embracing that title. Nor is the reference to his being “the one” anywhere near as egregious as a man celebrating being called the “king of Israel” and the “second coming of God.”

Were Trump an actual Christian, he would be horrified at the reference and would have quickly distanced himself.

He is not, however, a redeemed believer in Christ.

He is an arrogant, deluded egotist. He is who he has always been: profane, irreverent, and dangerously corrupt.

Shame on those church leaders who continue to publicly support this man, while also ignoring or making excuses for such a blatant show of blasphemy.

August 5, 2019
The Silence of the American Church Is Deafening
Next Post 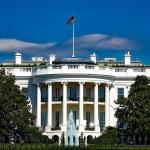 September 7, 2019 Trump Is Coming Unglued (and Somebody Needs to DO SOMETHING)
Recent Comments
21 Comments | Leave a Comment
Browse Our Archives
get the latest from
Susan Wright on the Right
Sign up for our newsletter
POPULAR AT PATHEOS Politics Red
1