on the genealogy of feminine virtue

on the genealogy of feminine virtue March 18, 2016 Rebecca Bratten Weiss

We are taught from early on how to be women.

And then, at some point, for some earlier, others later, sometimes having read a significant book, sometimes having had an epiphany, we realize that we have been training ourselves not to be ourselves. If being a woman is so natural, so universal, so absolute, why must we be taught these many subterfuges, hiding away the natural beneath the artifice? There is in the art of presenting “a woman” a constant self-checking. We check ourselves when inclined to be bossy. We check ourselves to make sure we’re modest / ladylike / sexy / empowered enough. We compare ourselves to men to make sure we’re not violating our eternal inviolable femininity, or perhaps to get a better idea of the pattern to follow if we want to be successful. We check ourselves in the mirror, because our disguise as women is elaborate, and makeup might smear or hairstyles tumble. Are those wrinkles? Grey hairs? We check ourselves in our natural advance through time, arresting development, because being a woman always means being young and beautiful. Eventually being a woman means being old and wrinkly, but we are trained not to accept that. Whole industries are devoted to pretending that we will be forever maiden, never crone. All hail the sixty year old who still looks thirty!

Playwright Judith Thompson, in a panel discussing woman’s theatre, once said: “When I have young babies I like to let my breast milk leak through my blouse in public at nice restaurants….And the looks of disgust on people’s faces are the same looks on the people that walk out of my plays. I’ve let something leak that’s not supposed to be leaking.”

The filmy, gauzy, fluttering garb of the feminine artifice would be more easily flung off, perhaps, except that we have been instructed to wear it as our virtue. If it were simply a guise to please the boys or satisfy the demands of society, we might more easily say “no, this is not me. Thanks but no thanks.” But it’s not a hypothetical imperative – it’s a categorical one. So once we stop playing the role we become Bad Women.

(Forget about the fact that Mary of Nazareth didn’t play the role. Forget about the many female saints whose path to sanctity led them precisely out of the artifices of false virtue constructed for them by society. The whole idea of a female religious order challenges pre-set ideals about a woman’s place in a home, submissive to men, pretty, fertile, available, a thing to be enjoyed and to inspire. But forget about that).

Max Scheler, in Ressentiment, writes: “Among the scanty discoveries that have been made in recent times about the origin of moral judgments, Friedrich Nietzsche’s discovery that ressentiment can be the source of such value judgments is the most profound.”

What is ressentiment? It is when the spirit of rancor and bitterness becomes creative, and constructs new systems of values, systems of values designed specifically to undermine and destroy, to punish. It gives birth to a false morality, an inversion of morality, and parades it as true morality. “Thirst for revenge is the most important source of ressentiment,” Scheler writes.

Nietzsche identified women as more adept at the art of creating false value systems, because ressentiment is usually the privilege of the downtrodden. I’d like to say this isn’t the case, but I have felt it in my own bones, this uprising, this falsification. Revenge on the male for being more physically powerful, for being able to walk away. Revenge on the successful female who gets her way through charming him. Revenge ultimately on the self for not being what they told it to be.

But there is resentment on both sides. Simone de Beauvois asks “whence comes this submission of women?…how did all this begin?” Why, over the centuries, have so many structures of power, civil and religious and political and domestic and cultural, been set in place to keep women subservient, especially since – as feminists from Wollstonecraft on have pointed out – society and men do not benefit from this? Why make us act these idiotic roles, presenting weakness as virtue, hiding our sexuality beneath a perverse notion of modesty, or else using our sexuality to make objects of men? Attitudes that are regarded as repugnant, in men, have been encouraged in women – so that works such as Helen B. Andelin’s (horrifying)  Fascinating Womanhood instruct us to pretend to be stupider than we are, girlish, flirtatious, unreal. It’s no mistake that when the Eternal Feminine shows up to lead men to perfection she is, invariably, dead. Do men hate us, as Germaine Greer says they do? “I refuse to be a female impersonator,” Greer says, meaning: refusal to play the artificial role, acting out the artificial virtues, that society has foisted on us.

Why the artificial distinction between male and female virtue occurred is a fascinating question. That there is some set structural hatred between the sexes is too pessimistic a notion even for me, and it is belied by history, by friendship, by love. Perhaps it has to do with utility – the usefulness of a submissive class. Certainly it has to do with keeping this dangerous female fertility on a leash. And, of course, as long as fifty percent of the human population is trained by false virtue to be weak and irrational, every man will always have someone on whom he can look down. Resentment of women because we worship God instead of men – might this be the creative swamp from which false ideals of feminine virtue emerged, to corrupt the Christian moral vision?

I do not believe there is such a thing as more womanly values, or feminine virtue. The classical and the Christian virtues are there for us all. Everyone, male or female, is commanded to be courageous, prudent, temperate, and just. Faith, hope, and love are for everyone. While our living out of these virtues differ from one person to the next, and while our sexuality is part of who we are as individuals, the idea that the pursuit of virtue – let alone of sanctity – could be a matter of following some set pattern is ludicrous. John Cardinal Newman said of the saints “they are admirable, but not imitable.” Not because living up to their example is impossible, but because to become holy is to become more oneself, more individual, unrepeatable. St. Francis threw himself naked into a thicket of thorns because he felt compelled to. Was he mad? Perhaps. There is a divine madness in art, and in love, and so (I presume) in sanctity. And so, if you try to achieve holiness by throwing yourself into thorns, or by stripping in front of the bishop, you may get arrested, but it won’t make you holy.

Whatever your path to sanctity is, it will be the weird, terrible way that is entirely between you and God. 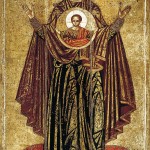 March 21, 2016 pregnant, catholic, and unmarried: unconventional families and the catholic church
Recent Comments
0 | Leave a Comment
Browse Our Archives
get the latest from
Catholic
Sign up for our newsletter
POPULAR AT PATHEOS Catholic
1