looking back on 9/11, seeking a sacramentality in emptiness

Whereof one cannot speak, thereof one must be silent (Wittgenstein)

Where were you on September 11, 2001? Mary Pezzulo asks this question in her recent evocative piece at Steel Magnificat. Heaven help me, I am going to answer, though this is one of those few topics on which I opt for silence, stepping outside the circle of shared remembrance.  This is partially because all of us who discuss atrocities find ourselves at some point up against a wall of emptiness, an inability to do justice. If God was absent at Auschwitz, how can we make sense of this in words?

Words come on the news. Horror is packaged for us, marketed for us, and we’re used to it, prepped for it by our entertainment.

Pezzulo speaks of how the encounter with the media’s repetition of images reduces the event to the cliché, before we got around to creating clichés in recollection:

So you watch. And they repeat the images over and over again– from the plane crash to the tower collapse to the reactions of people on the street, to the tight-jawed anchor in the newsroom reading the same few lines over and over for whoever just tuned in. It gets more ridiculous as the hours go by, because everyone in the world has tuned in, but they just keep repeating the news again and again. The images play on and on until they seem like nonsense; they themselves become cliches and then devolve into abstracts, a patchwork of moving shapes that make no sense to the eye. The tower is there, and then it’s moving down like an elevator car into a shaft, and then it’s gone, nothing but black smoke, and the people behind the cameraman are screaming. Over and over again.

Exchanging recollections of a day that is etched perpetually in the memory, by terror and shock, is a way we in our fractured culture bridge the gaps of isolation. It’s a ritual of solidarity. But what does it take to remind us that we are brothers and sisters? Horror and destruction so great it shakes us from our customary paths?

So, you see, I can speak circuitously, theoretically, about our collective mourning. But answering the question is hard for another reason: because my answer is one I’m ashamed of. I didn’t mourn on that day; I was outside the circle. The events of September 11 occurred in one of the darkest phases of my life, when I had dropped off the radar, out of the sphere of social and intellectual privilege I’d enjoyed, and into a world of addiction and despair.

Oh, I was having fun, of course. That’s also something to be ashamed of: despairing people aren’t supposed to have fun; we’re supposed to huddle in corners and cry, not dance on tables. We’re especially not supposed to remember dancing on tables in conjunction with tragedy.

I’d been at our employee party the night before, and a few of us had kept on partying, into the early morning hours. That was life, then. When the call from my housemate came, telling us to turn on the TV, I was too befuddled to process what she was telling me. Was it a movie? A documentary? Were we supposed to be entertained?Eventually, after a quart or so of espresso, it began to sink in. Eventually I remembered that I have family in New York. But it was all so remote: I felt nothing, because feeling nothing was how I survived.

We had nothing to share with one another, no community. My fiancé went to sleep. My boss, also one of my close friends, went to open the bar, found that the upper managers had decided to close the country club for the day, and sat down to watch the news. He was from New York, and as he watched grew so upset, he began drinking Dom Perignon, because that was how we dealt. He drank several bottles, and took the rest of the case home. Once his theft was discovered, he was fired. I never saw him again.

That was what we found that day: emptiness, isolation. A beautiful blue sky, without a plane in it.

Remembering 9/11 is mortifying, because the narcissistic depression of an over-educated barfly is a drop in the water, compared with the vast sea of loss and emptiness endured by those who have suffered violence, war, and loss. So how can I talk about it?

After fifteen years, I’ve decided that maybe I can talk about it by talking about emptiness. See the emptiness in which people seek dissolution in chemicals and distraction. See the emptiness in which only shared cataclysm can make us forget our hatred. We have no collective rituals of grief or rejoicing, and many walk in isolation, those they loved now lost. And then, the terrible emptiness, the failure of meaning, in which is born violence. We need to face this emptiness, if we are to counter the terrors that have emerged in this millennium. Violence will not fill the void, but can only make it more vast.

And many are grieving still today, for those they lost then, and many are grieving for new sorrows, and elsewhere in the world, the destruction and death I saw on a TV screen fifteen years ago are normal. Perhaps in our ritual mourning we enter into a rare solidarity with them, too. Let’s hope at least this is something we can carry with us after the trauma has passed and the news has become cliché.

And here’s what I keep asking myself: is there a sacramentality in absence, or in loss, an unseen hand that holds us, even the most lost or violent?

And then I tell myself: maybe this isn’t about you, about your speculations.

(The phrase: this isn’t about you. Does this fill you with relief, or with dismay? We want to believe, maybe, that everything is interconnected. That’s why we carry on telling our stories, sharing our recollections) 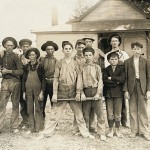 September 5, 2016
There Is No Such Thing As a Self-Made Man: What We Owe the Worker
Next Post

September 14, 2016 the exaltation of the cross should mean reaching out to the suffering
Recent Comments
0 | Leave a Comment
Browse Our Archives
Related posts from suspended in her jar