As a solitary feminist in a right-wing milieu, I seem to spend a lot of time dismantling straw-feminist stereotypes. You know what they are: feminists are trying to destroy the family. Feminists are trying to wipe out the differences between men and women. Feminists are witches who fly around at night cutting off phalluses…okay, that one’s an older prejudice, but it contains a germ of the most common criticism of all: Feminists hate men.

This one comes up a lot. I guess I can see why. We do expend a lot of intellectual energy criticizing the injustices inherent in patriarchal culture. And since patriarchal culture automatically privileges men, our dismantling of the imbalance of privilege might look like an attack. And yes, a few feminists do indeed hate men. There is no feminist creed stating “feminists can do no wrong.”

But this is not how it’s supposed to be: you can’t fight violence with violence.

Ironically, many defenses of men against the evil phallus-cutting witches end up unintentionally depersonalizing men themselves. Case in point: a blog from The Remnant Newspaper, entitled “Feminism’s War on Men: the Campus Rape Culture.” This is a classic mélange of victim-blaming, romanticization of a mythic rape-free past, and the usual tiresome denigration of millennials as special snowflakes. You can probably imagine. You’ve seen it before.

There’s the assumption that victim-blaming is even the broad moral norm:

If a man or a woman knowingly walks through a bad neighborhood and gets mugged, we don’t say: “It’s not your fault; you didn’t know what you were doing.” We would probably respond with something like: “You made a dumb decision by putting yourself in danger when you knew better. I hope you’ve learned your lesson and won’t do it again.”

Wait, what? In what kind of circles has this writer been moving? I recommend she find better friends, if this is her understanding of the normative mode of responding to a mugging. Who on earth says “I hope you learned your lesson?” to someone who has been the victim of an aggressive crime?

We have the usual confused approach to the nature of justice:

Of course everyone makes mistakes. But rather than whining for justice that we don’t deserve, we need to learn from our mistakes, make the appropriate changes, and move on with our lives. It is shameful and disgusting to perpetuate our guilt by blaming others or making a national fuss. That’s not going to change the fact that we made a poor choice.

First of all, there’s no such thing as a justice one doesn’t deserve. We may not deserve mercy, but the nature of justice is precisely that it’s what we deserve. And demanding justice is not whining. Was Martin Luther King whining? Do crimes whine out to heaven for vengeance?

The problem, of course, is that this writer has been trained to blur the distinction between having made a mistake (walked through a bad neighborhood, accidentally drunk too much, forgot to put water in the coffee pot) – and actually done moral wrong. Add a shot of internalized misogyny, and we have a woman who is more disgusted by the fact that we blame rapists for rape, than by rape itself.

If we are to believe the blog title, the point of all this is to rush to the defense of men. She is not the first to do so in this way: there’s a whole minor market for the defense of men, by appropriately feminine women, against my type of unnatural female. But as usual, the trajectory of the defense is misguided:

Men respect women who respect themselves, who know their limits, and who don’t let other people treat them badly.  Men will never respect women who dress provocatively, drink themselves into unconsciousness, and let themselves be abused by random strangers, which is exactly what modern feminists are encouraging women to do when they claim women can match men drink for drink without consequence.

We’ll try to skip over that “let themselves be abused” bit – we already know this writer is confused about moral guilt as well as moral psychology.

What I want to focus on here is the implication that men are incapable of holding a right moral stance towards a woman as a person, unless a woman performs in a certain way. This runs counter to the example of Christ, who saw the intrinsic dignity and image of God in every person he encountered, male or female, rich or poor, respectable or outcast. Now, I know original sin runs deep, which is why it is woven into the power structures of history – and why “rape culture” is intertwined tragically with culture itself, and is no new thing, but as old as poetry.

But I refuse to believe that men are so hopelessly depraved that this shallow, depersonalizing view of women is all they can manage. Perhaps this is true of some men (just as it is, unfortunately, true that some feminists hate men) – but this is not an ideal state, nor a necessary one.

In holding men to a higher standard, in expecting them not to rape drunk / unconscious / scantily clad women, we are not attacking men. We are refusing to accept a vision of maleness as totally depraved. Remnant type writers like to talk sweepingly about how “radical feminists” either attack men or want to be like them (make up your minds; which is it?). But how is a view of men as natural-born rapists, incapable of seeing the dignity of the person, not an attack?

I’ll stop before I stumble into woman-splaining what men want and who they are and what they’re capable of. Perhaps men would like to speak for themselves on this topic. But, speaking as a woman, and a feminist, I’ll say this: I think better of men, than the caricature of them presented by the anti-feminist contingent. 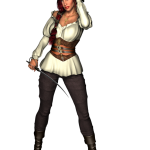 January 6, 2017
Raising the Standard for our Female Characters
Next Post

January 11, 2017 they tell me my body is sacred. what does this really mean?
Recent Comments
0 | Leave a Comment
Browse Our Archives
Follow Us!