Every Day an Apocalypse

For most of my childhood we had no television. Every Christmas, if we wanted to watch holiday movie classics like Rudolph or It’s A Wonderful Life, not only did we have to find out when they were showing; we had to beg someone to host us in their house. In retrospect, I have to wonder what our “normal” friends thought, when we came straggling in, possibly a little grubby (since we had no running water either), bearing gifts of fresh baked bread or homemade fudge, the secret family recipe.

Those other houses at Christmas time felt so warm, compared to ours, because we had no insulation and heated only with a single wood stove. Every day all winter my father was out cutting wood with his bow-saw (no chainsaws: too noisy, and also expensive) just as every day all summer he was out in the garden, growing the vegetables we lived on, that my mother canned and froze and dried.

I was dimly aware that we did things differently from others, and that this had something to do with preparation for the End Times. A remote, ominous cloud called apocalypse hovered over everything we did. Living apart from the system may have been inconvenient, but when civilization collapsed we would still survive, a remnant, living off the land, serving those who came to refuge with us.

When you grow up with the End of the World, you don’t really think about it that much. It’s like bad wallpaper you learn to ignore. The people who did come to refuge with us were usually irritating, but I could escape them: climb a tree, ride a horse, write a trope-filled teen novel in which, when the sulky heroine slouches past her father in the living room he’s reading The Latest Word on the Last Days.  That was what I imagined dads doing, when they weren’t cutting down trees or growing copious quantities of beans.

All the talk about fire falling from heaven and the Three Days of Darkness may have upset my sister, but I was self-absorbed enough to ignore it, because it wasn’t interesting, all wrapped up as it was with religion, which meant boring and embarrassing prayer meetings where long-winded men made up rules for everyone, especially for women.

Somehow I had come to imagine the End of the World as a boring inconvenience, a mandate harsh as stone tablets flung down from on high, upsetting my revels round whichever calf of gold I’d made that week. My plans involved transgression: breaking the rules men made about which horses I could ride, whom I could date. The trajectory of my own dreams was always towards the carnivalesque, the upset of regulation, while religion, even if it came with fire from heaven, was rules, rules, rules.

But in the gospel reading for this first Sunday in advent, it’s all about uncertainty.

Watch, therefore;
you do not know when the Lord of the house is coming,
whether in the evening, or at midnight,
or at cockcrow, or in the morning.
May he not come suddenly and find you sleeping.
What I say to you, I say to all: ‘Watch!'”

How strange that the writers of all these books about End Times could always ignore this reminder to us that we do not know. They were always so certain. 88 reasons why the world will end in 1988. The Three Days of Darkness. The Times of the Great Tribulation. They would tell you how to light a candle to ward off the demons screaming in the darkness, how not even to open a door to a friend coming for refuge, because a demon could impersonate your friend, and come in to get you.

It was smug certainty. It was fear. Fear of the world, of otherness. And this fear turns to nihilism, to snuffing things out, obliterating. The exact opposite of the apocalyptic writings in scripture, that remind us that we do not know, but also tell us, be not afraid. The coming of the Lord is looked on with gladness.

We’ve forgotten, after all, that “apocalypse” does not, technically, refer to things blowing up and keeling over, nor even to “end times stuff” – but rather to revelation. Literally, the lifting of the veil. That which was hidden from the foundation of the world is made present to us. Reality rushes up, right at us, right in the face.

That’s what we go looking for, after all, when we seek out stories, when we rush off into the woods to seek adventure, even if it’s only make-believe.  And the veils lift, as we run through the woods, or pass a lighted house from afar, as we look out the smeared train window at the other faces passing by. Every day an apocalypse. And every second, worlds ending.

Maybe when I turned away from the dreary end-times prophecies it wasn’t because I rejected the apocalyptic, but because I sought it out. I sought the visions that would outshine the artifices of those power-hungry men who tried to pin everything down, make everything rigid – live human bodies, curious human minds. Even the end of the world.

Later I met scholars who liked to say things like “what is your puny mind, compared with the revelations of God?” Turned out the revelations of God were usually something they had special jurisdiction over. We had to listen dutifully, absorb it all through their approved channels. They were more elegant than the end-times writers, but they were still trying to pin down Being. Like poor Prufrock, formulated, pinned and wriggling.

Today, if I want to watch those old Christmas specials, it’s so easy. They’re available in multiple formats, and I even have a little money to afford them. We can sit in the comfort of our own warm room and watch them, recorded, ready for us exactly when we want them. It’s all under control.

I’m not complaining, really, but there was something about the wildness of those old Christmases, even when we woke up with frost on our walls, the water in the bathroom frozen, even when we had to finagle and wheedle our way into other homes just to watch Santa Claus is Coming to Town. Everything beyond our control, every day an apocalypse.  Be alert.

November 12, 2017
How the Religious Right Prepares Women to be Victims of Rape Culture
Next Post 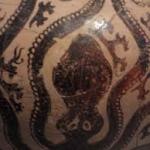 December 20, 2017 God in the Grotesque: a Nativity Scene
Recent Comments
0 | Leave a Comment
Browse Our Archives
get the latest from
suspended in her jar
Sign up for our newsletter
POPULAR AT PATHEOS Catholic
1