Why Does the Right Hate Intersectionality? 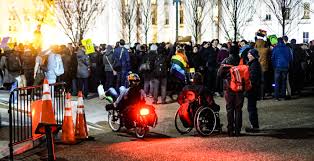 Last year, some of my conservative friends were sharing around a First Things article by Elizabeth Corey, in which she describes her experience attending a conference on intersectionality at Notre Dame. The title of the article was “First Church of Intersectionality,” and its gist was that intersectionality, a popular and useful idea for academics and activism, has somehow now become a religion. Corey’s arguments for this? First, that at one point she “felt” that she was in a church:

“As she spoke, I began to feel that I was not at an academic lecture at all, but at an Evangelical church with a charismatic pastor. She even looked the part, wearing all black with a vibrant green scarf that hung around her shoulders like a cleric’s stole.”

Hm, I thought. I often wear all black, and occasionally dress it up with a colorful scarf. I’ve been told I lecture charismatically. Once a student told me he’d never heard a professor mention Jesus as much as I did – were my classes “religious”? Or simply animated and not boring? Feeling that you’re in a church is not, to my mind, sufficient evidence on which to base the claim that the topic at hand has become a religion. I remember an occasion on which two history professors, in debate, because so infuriated over the topic of the Iraqi war that they almost came to blows. People get excited about their beliefs. Is that the same as religion?

Corey goes on to point out that people are upset and angry, and as a result want to change political systems. Which is true, but this is nothing new. Revolutionary spirit is not an invention of modernity, nor of romanticism; it was present in every slave revolt and every populist uprising across history.

Corey draws on a thesis of Eric Voegelin to make the argument that this is something special – something gnostic:

“The gnostic, Voegelin observed, is fundamentally dissatisfied with his situation and believes that the world is “intrinsically poorly organized” and that salvation from the world’s evils is possible. The gnostic further thinks that “the order of being will have to be changed in an historical process” and that this is possible through human effort. Finally, the gnostic looks for a prophet who shares saving knowledge about how to make the transformation happen. It turns out that the intersectional project accords in every detail with Voegelin’s description.”

“Intersectionality is, then, a quasi-religious gnostic movement, which appeals to people for precisely the reasons that all religions do: It gives an account of our brokenness, an explanation of the reasons for pain, a saving story accompanied by strong ethical imperatives, and hope for the future. In short, it gives life meaning.”

Wait, what? Even if we accept Voegelin’s arguments, Corey is making quite a leap. “Gnostic” has a very specific meaning in the history of ideas, and even in a general sense denotes access to secret and privileged knowledge.

Earlier in the essay Corey made the claim that “although the term has been around for almost thirty years, most people—even academics—don’t really know what intersectionality means” – implying that she sees it as some arcane body of information possessed only by the few. Even if this were true (and it’s not – most academics know what intersectionality means, and the term is widely used among non-academics as well) this alone is no sufficient to justify the term “gnosis.” Anyone who can google can find out what intersectionality means. It’s not difficult to understand. It’s all about intersecting lines of power and oppression, and the need to see them as they interconnect and affect one another. The concept first came from legal scholar Kimberlé Crenshaw in 1989, and if it’s popular it’s because it’s incredibly useful. It’s necessary when we look at the failures of first and second wave feminism to address race issues, for instance. Or to consider how capitalist oppression of the laborer intersects with white supremacist oppression of the racially other.

Corey didn’t invent the claim that intersectionality is a religion, however. Andrew Sullivan, in New York Magazine, posed the question: “Is Intersectionality a Religion?” – and seemed to conclude, based on the fact that people in Leftist universities are sometimes intolerant and censorial, that indeed it is. Sullivan then moved on to compare Leftist intolerance with the Trumpian assault on truth and reason, leaving me with the jarring sense that I was reading two different essays. Yes, the atmosphere in academic circles is sometimes intolerant, these days. But is this the same as Trumism? And is leftist intolerance of racism and sexism the equivalent of right-wing intolerance of mere difference? And is it legitimate to blame irresponsible zeal about an idea on the idea itself?

Shortly after Corey wrote her piece, another bit on intersectionality as religion made the rounds, this time by Anthony Esolen, writing for Crisis.  In “The Church of Intersectionality Offers Nothing For Sinful Man,” in which he writes:

Now, the founding claim of “intersectionality” is that members of various groups in the United States—women, blacks, Mexicans, gays, people in wheelchairs—are all victims of the same oppressive system or structure, which system or structure works like Adam Smith’s invisible hand, like a ghost in the machine, to deliver power to white men born in America who have the full use of their limbs and who are attracted to women after the ordinary fashion of nature.

It’s a common tactic on the Right to label anything new and popular, especially in leftist circles, as a “religion” filling some supposed gap, some theoretical vacuum that was created when religion itself was ejected from public life. And yes, it’s true that the human heart is hungry for meaning, that we repeatedly set up idols and graven images. And it’s also true that some of these idols, at times, may be ideologies – though they’re more likely to have to do with power and pleasure, as was noted even by Aristotle. There’s the lurking danger of the “church without Christ” which Flannery O’Connor identified in the faux-Christian white bourgeois culture of the American South. And there’s also the danger of a purely materialistic view of justice, which places responsibility for change entirely within human hands, and ends up justifying violence. This too can become a “church without Christ” if we aren’t careful. But the tendency to make idols, especially idols of money and power, is a constant in right-wing politics where the drive to preserve structural hegemonies takes precedence, repeatedly, over the Gospel.

Fundamentally, though, the tendency to make idols is a human tendency, not the exclusive domain of any one plot on the political or theoretical map. Ideological obsession, of the sort that Dostoevsky wrote about in The Devils, happens across the board. But that it happens does not, per se, nullify the value of the idea.

A few days ago, yet another piece on intersectionality as religion went the rounds, this one from National Review. David French argues that intersectionality is dangerous because it breeds intolerance, and points, among other things, to the failure of the leaders of the Women’s March to denounce anti-semitism.

Now, I’m also bothered by this failure. I’m bothered because I am Jewish, also because as an intersectional feminist, I see their tolerance of anti-Semitism not as symptom of intersectionality, but as a failure of it. You can’t be truly intersectional while bracketing out a whole huge segment of radical injustice. The point of intersectionality is to look at all criss-crossing lines of oppression. That’s why, while intersectionality as a concept is simple to understand, as a reality it’s complicated to put into practice, and yields no quick and easy answers. It means thinking about how to address issues like violence against women while also recognizing racial or economic injustices that may prompt greater instincts of violence in men – or addressing the plight of low-income workers while also keeping in mind our responsibility to the environment. It means holding many different ideas in one’s head at once.

Is it just because its praxis is complex that intersectionality frightens the Right? Is it because holding many ideas in one’s head at once is difficult? There is certainly what looks to me like willful thick-headedness, in some of their accounts. But I’m not sure it’s just that.

The thing about intersectionality is that it refutes what-about-ism. Thinking intersectionality means that your concerns about one injustice don’t get automatically shut down when people bring up another. Just as being a feminist means loathing the predations of Bill Clinton as well as those of Donald Trump (though Clinton’s are less an issue, at the moment) – so, being intersectional means that concerns about Black Lives Matter can’t get canceled out by concerns about the persecution of Christians oversees. It means you don’t let “homeless veterans” briefly become a token reason for ignoring the plight of refugees. It means, if you happen to be a pro-life intersectional feminist, that the suffering of victims of gun violence can’t get canceled out by “what about abortion.” It also means that you can think about the legitimate reproductive rights of women while also recognizing the importance of defending life. And it also means that each of these conditions of injustice has to be seen in its own unique historical context.

Because the Right likes to shut down concerns about injustice by bringing up other injustices that they’ve suddenly decided to care about, intersectional thinking is indeed dangerous to them. Just not dangerous in the way that they’re trying to make us see it.

March 12, 2018 A Dispute Over “Color Blind” Casting Leads to Racist Attacks on Teens
Recent Comments
0 | Leave a Comment
Browse Our Archives
Follow Us!