As Bill Creed, a Jesuit spiritual director, once told me, “In the bright sunshine of God’s love, your shadows begin to emerge.”
— James Martin, The Jesuit Guide to Almost Everything; A Spirituality for Real Life

Boy, does that resonate with me, and with everyone I know who is serious about deepening their relationship with Christ. Face-to-face with the All-in-all, one eventually comes face-to-face with oneself, in all one’s glaring inadequacy; the soul is planed down through prayer and examination of conscience, and every flaw and burr seems magnified.

The Jesuit Guide to Almost Everything is a rather surprising book. Did you know that 35 craters on the moon have been named after Jesuit scientists? Or that Jesuits discovered quinine (the modern anti-malarial called “Jesuit bark” in the 16th century)? Or that they invented the trap door, without which the Wicked Witch of the West might never make her timely exit, and Falstaff might never fall?

Well, that’s not what this book is about, not really. Not remotely. Given those little tidbits, a trivia-freak like me might rub her hands together in delight, anticipating a giddy read.

The Jesuit Guide is a fun read. Fun in the way that sitting with a pal and discussing the exciting, ever-evolving way -the always beginning way- of prayer, and acquaintance and friendship with God can be fun, but also a little humbling and challenging, and ultimately quietening.

Fr. James Martin is a friend, but that’s not why I love his newest book. I love it because what he is writing is true, and warm and genially helpful to the seeker who perhaps has been reading scripture and practicing prayer for a little while -or who hasn’t been practicing at all, but feels a nameless tug for “something more”, and is suddenly feeling like there are too many forks in the road. If you need a bit of centering, this book will help. In it Fr. Martin, who clearly loves being a Jesuit and a priest, shares the Ignatian pathway; the spiritual exercises, practices and perspectives devised by St. Ignatius Loyola and still used today by Catholics and non-Catholics, alike.

Martin begins by asking you what it is you desire; he suggests that the desire may be prompted by the Holy Spirit and says, “God wants to be with you. God desires to be with you. What’s more, God desires a relationship with you . . . [and] God meets you where you are.”

God meets us where we are, but recall that Jesus “stands at the door and knocks.” God is always a gentleman and never simply barges in. But we can invite him to meet us where we are, in many ways. One particularly effective means is through the daily “examination of conscience,” which the Jesuits call “examen” (from the Ignatian Spanish), a five-step (and rather intuitive) run-through of one’s day. It is a means of inviting God, thanking God with savor, identifying your failings, asking forgiveness and finally making a conscious resolution with the help of His grace. It is, literally, bringing everything to God, every day, and picking through it all, to make sure nothing valuable is lost.

I like this story Martin tells about his early days as a Jesuit, and his attempts to help a woman named Wanda polish an unpromising resume:

We met several times and together we crafted a resume that highlighted her skills, pored through the newspaper want ads, and ran through some practice interviews.
But no matter how hard we worked, Wanda never found a job, and I began to feel frustrated working with her.
One day, I confessed this to my Jesuit spiritual director …
“Is your ministry coming up in your examen, much?” he asked.
It wasn’t. Since my primary work was studying, I said, I was more focused on that. In my examen, I would carefully review what experiences I had in my classes, during my study time, and over lunch and dinner with my Jesuit friends in my community. The work with Wanda and the other clients was an afterthought. Or, not even a thought at all.
“Maybe one reason taht the work seem sdull is because your’e not bringing it up before God in prayer,” he said.
“No,” I said, “It’s dull because it’s dull.”
Dick reminded me that when we feel resistance to something in prayer, it’s often because we’re resisting God’s invitation to growth . . . I promised my self that I would remember Wanda during the review part of the examen.

I’m not going to tell you what became of that. You’ll have to read the book. But what struck me as I read this -and other sections of the The Jesuit’s Guide was Martin’s unflinching honesty about himself, and his own failings, foibles and faults. His book is full of heroes, beginning with Christ, and moving through various Jesuits and other priests and religious, sisters, laypeople. He is never among their number; he is instead learning from them, in quiet awe.

The Jesuit Guide covers a lot of ground:

*Friendship with God
*Six Paths to God
*The beauty and value of chastity
*The good works that come, inspired by faith
*The freedom that comes with surrender.

You talk about tuning into the various ways God can actively communicate with us in “real time,” -emotions, insights, memories, physical feelings – what you seem to be describing is a kind of “everyday” and casual mysticism. Catholics tend to be very careful when it comes to mysticism, unwilling to pronounce what may be flights of imagination as anything more. And yet what you are describing is a state of quiet awareness that ponders in a mystical way. Are you saying that supernaturalism needn’t be dramatic to be a real and effective experience of a growing intimacy with God, in the workaday world, and that -to paraphrase the Orange Juice commercial- it’s not just for saints and beata’s, anymore?

What a great question! Let me unpack that one a bit. First of all, I think that anyone can become aware of God’s presence in the day by simply paying attention. One of the techniques I speak about in my book is St. Ignatius Loyola’s “examination of conscience,” a brief review of the day, when you recall when you felt God’s presence. Now, we can be aware of God’s presence as it’s happening or in retrospect (often it’s easier in retrospect, when we’re less distracted).

But either way, as you say, we can experience God’s presence through a variety of modes–deep emotions that move us to compassion or pity, surprising memories that heal or console us, insights that solve a difficult problem in our lives–as well as more “traditional” ways, say, while reading Scripture or during the Mass. The inner life is an essential path to God, and God can of course use all of our interior “movements,” as St. Ignatius would say, to communicate with us. As St. Augustine said, God is “intimior intimio meo,” – nearer to me than I am to myself. In fact, St. Ignatius initial conversion happened through another important movement: desire. In his case a desire to be like the saints. And in his Spiritual Exercises, Ignatius counsels using even one’s imagination as a path to God.

So God is powerfully at work inside us, where, after all God dwells, as in a temple.

Mysticism, I think, is a much more intense experience of God’s love. Say, a time when you feel unmistakably “filled up” or “overwhelmed” with God’s presence, or perhaps “lifted up” or “raised up.” Or perhaps you get a special, rare, and sometimes difficult-to-describe glimpse into what St. John of the Cross called “I know not what.” But even that kind of mysticism is not reserved for the saints. In The Jesuit Guide, I talk of many “mystical” moments that everyday believers may have–but they may not have identified it as such. Why? Because often those intense experiences are dismissed as “something else.” “Oh, I was just being emotional,” people say.

In short, there is the everyday experience of God, which we can all become aware of; and special “mystical” moments that happen less frequently–but that happen to all of us at various points in our lives. The key is paying attention and recognizing that they are, in fact, coming from God.

So yes, as you say, mysticism is not just for the saints. And to paraphrase the orange juice commercial, a day without prayer is like day without sunshine!

A bit of sunshine in Lent; a welcome concept!

Fr. Martin talks about his journey to faith

Elizabeth Scalia manages the Catholic Portal at Patheos and blogs as The Anchoress at First Things, where this review first appeared. 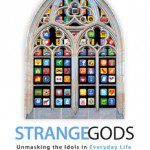 Job for Children?
Review of "Where is Wisdom?" by Scott James
view all Entertainment blogs
Copyright 2008-2020, Patheos. All rights reserved.