When God Talks Back 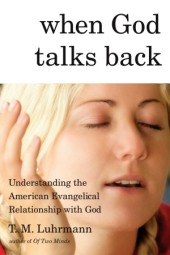 [This is the first in a series of posts by T.M. Luhrmann, author of When God Talks Back: Understanding the American Evangelical Relationship with God, about her book and research. For more conversation on this book, visit the Patheos Book Club.]

I am an anthropologist with one foot in psychology. About ten years ago now I set out to study how God became real to people by looking at a kind of faith that might seem to make the contradictions and difficulties in a faith commitment even more difficult: experiential evangelical Christianity. This is a faith in which people seek an intimate, interactive relationship with God. They want to hear God’s voice, and feel the touch of his hand. They want to know that he loves them, specifically and personally. They talk to him about where they should go on vacation, what shirt they should wear in the morning, and even what shampoo they should buy. They expect that he will talk back.

This is the faith that the hippie Christians gave to our country, although most people who practice it are now quite right wing. It is part of the radical spiritual transformation of that era, when the hippies discovered speaking in tongues and the Beatles discovered Maharishi Mahesh Yogi and everyone wanted direct experience of the divine. As many as a quarter or more of all Americans now embrace a Christianity in which God is imagined as intimately present the way Jesus was for his disciples in the days after his death, when he wanted among them yet again.

I think that this kind of faith speaks to people now because it helps them to deal with doubt. The liberal Christian God, re-imaged so that the claims of science and religion could be reconciled, has failed. Those pews are often empty now, while churches who see themselves as filled with supernaturalism sparkle with life. This vivid, right-here, almost magically real God is a God of mystery and paradox—not a God whose supernatural presence is easy to reconcile with a skeptical science. Such a God makes an in-your-face demand to suspend disbelief and to create a third epistemological space, between everyday material reality and fiction, which is also real.

Questions or comments for Dr. Luhrmann about her research on experiencing God?  Leave them below and she’ll respond to them in a video to air at the book club next week. Also join us for a LIVE CHAT with the author on Friday, April 27, from 2-3 pm at the Patheos Book Club!

April 18, 2012 How Do You Hear God's Voice?
Browse Our Archives
Related posts from Take and Read