Jon Sweeney on When Saint Francis Saved the Church 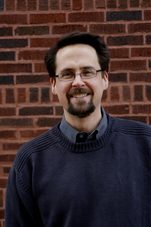 “I don’t think we can really grasp Francis’s life today unless we see it through the lens of his struggles, and unless we meet the friends and followers who seemed to do all they could to screw up what Francis started.” — Jon Sweeney, author, When Saint Francis Saved the Church

This month, popular historian and author of The Pope Who Quit Jon Sweeney releases his latest work of Catholic history. In When Saint Francis Saved the Church, Sweeney presents an intriguing portrait of Francis beyond the readily familiar stories and images.

We invited Sweeney to answer a few questions about the popular Saint and what we’re missing from the sweet picture book stories of this revolutionary figure in Christian history. 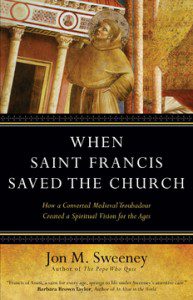 How does the popular view of Saint Francis differ from the real story of his life?

I think the predominant image people have of Francis is of a gentle, unassuming presence. A sort of skinny Buddha, if you will. But that’s the problem; Francis was sometimes gentle, but he could also be severe; he was unassuming at times, but more often he was what we’d today call “in your face,” seeking justice.

You quote novelist William Faulkner as saying: “The past is never dead. It’s not even past.” How does this play into your choosing to write a history book about St. Francis?

I think we are living in a time when the past is very alive all around us. A Christian is taught to believe that this is always the case, of course, but I think this is especially true right now in the various ways we’re seeing the spirit of Francis of Assisi alive once again in our midst.

In what ways did St. Francis revolutionize and transform the Church?

Six—detailed in my book: through a high view of friendship, by embracing the other, through personal poverty, by developing a new spirituality, through gentleness and care for creatures, and by embracing death.

For many of us, a favorite image of St. Francis is that of him delivering a spirited sermon to the birds.  Did that really happen, and why did that particular story become so central to his legacy?

Sure, it happened, but it wasn’t cute. Our iconography has made it seem just cute—you know? Instead, as with many of the iconic moments in his life, it happened at a time of personal crisis and uncertainty.

How do Pope Francis and his vision for the Catholic Church reflect his namesake?

Those six aspects of Francis of Assisi’s genius that I mentioned, above…Pope Francis happens to be reinvigorating each of them—beginning with the first one: he has been reminding Christians of every stripe that friendship is first and foremost in our calling. Do that right and the other stuff hardly matters.

Who or what is capturing your attention these days?  What’s your next book project?

My current project is directly related to this one; I’m writing a biography of Francis, a book to replace the saccharine film biography from the early 1970s that most of us have seen, as well as the images of Francis in the Kazantzakis novel that have become so prevalent. I don’t think we can really grasp Francis’s life today unless we see it through the lens of his struggles, and unless we meet the friends and followers who seemed to do all they could to screw up what Francis started.

Check out the Patheos Book Club for more conversation, and to read a book excerpt, from When Saint Francis Saved the Church.

October 8, 2014 Called: A Book Review
Browse Our Archives
get the latest updates from
Take and Read
and the Patheos
Entertainment
Channel
POPULAR AT PATHEOS Entertainment
1 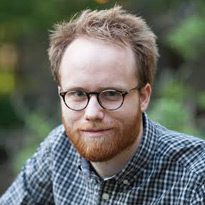 Common Grace, 2.70
Kuyper on the general effects of sin and suffering
view all Entertainment blogs
Copyright 2008-2021, Patheos. All rights reserved.