Here we are, about to traverse the invisible line into the New Year.  I’m not one for resolutions, but I’m all for making shit happen.  So to round out the year, I figured I’d share with you one of my evolving mantras.

I’ve always had a fascination with the word “manifest.”  Of course, my first introduction to it was via a grade school history class.  There, it was coupled with “destiny” – which sounded amazing and dreamy, but in actual application and historic use, quite horrifying.  But divorced from that baggage, manifest could be used as an adjective meaning “clear or obvious to the eye or mind.”  Or as a verb, it means to display, show, or demonstrate, to make known.  Then there’s the noun version – manifestation!  It says a lot of about the subjects that I read that the noun evokes the heyday of Spiritualism, magick, and various occult flavors.

About 10 years ago or so, I picked up the phrase “Manifest bitches” – which could be used as both “Manifest bitches” and “Manifest, bitches.” (Behold, the almighty comma!) “Bitch” of course being a word of much depth and interpretation.  It can be a noun, verb, or adjective.  It can be used to empower, take, or claim power. (It’s also just a letter away from “witch.”) Most often, I meant it as a way to say “let us who have the power and will, make shit happen.”

Somewhere down the line, I think around the time I moved to the (real) Jersey shore, bitches became beaches.  I lived right by the water, and I have a lifelong affinity for the Atlantic ocean and its beaches. Also, not everyone embraces “bitch” the same way, and I often had younger people in my workshops.  (I do try and watch my language. I watch it enough to see it go right out the window…)

And then, it became beeches. As in the tree.  And having read My Side of the Mountain more times than it has pages, the beech tree has some romantic connotations for me.

Then I thought about making a meme for it.  Here’s where I realized: most people don’t have any idea of what a beech tree looks like.  They’re not very distinctive or ubiquitous.  But you know what kind of tree is recognized by a large percentage of the population? Birch trees.  With their distinctive bark, they’ve graced many a 1970’s wall mural and hidden many a Bev Doolittle horse amongst them. 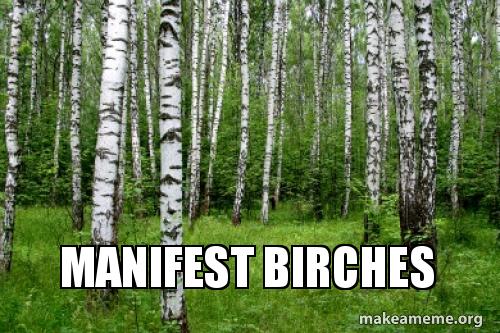 There’s a lot of symbolism to be found in birch trees.  They are considered to be a pioneer species, often being the first trees to claim open ground following forest fires and other disasters (man-made or otherwise). The trees tend to grow in groups and clusters, looking like a family –or an army.  Birches are known to be resilient against harsh conditions.  Hence, they often symbolize growth, adaptability, advantage, flexibility, renewal, stability, and family.

So all of that leads us to “Manifest birches.”  Those of us who are willing to bring forth the future, let us take root.  Let us grow quickly, in a stable and resilient fashion. Let us foster solidarity and be the change that is made visible, despite what destruction we perceive.  Let’s plant some freaking trees. 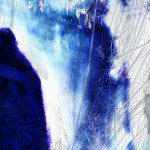 December 19, 2016
Feeling Around In The Dark - A Witch's Winter Solstice
Next Post 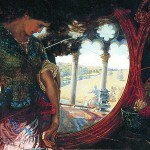