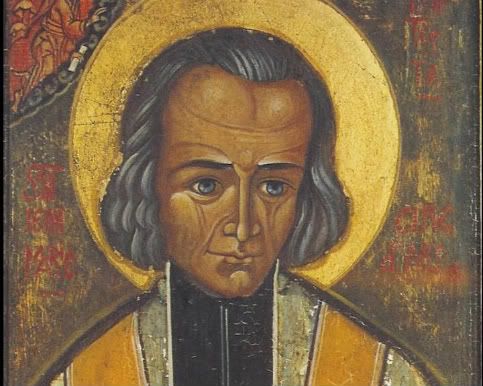 At the Vigil for Easter Sunday, when Buster was very small, he looked forward to the chanting of the Litany of Saints, partly because the deacon who led it would invariably stumble on “St. Perpetua and St. Felicity” which became an almost beloved mistake, and because eventually we would get to “St. John Vianney.” For whatever reason, Buster loved the sweep of the cadence and the accent on the “aaaaanyyy” syllable, and his little voice would pipe it out along with the deacon’s.

Last Easter, home from school and attending the vigil with us, Buster was not amused when I nudged him at the approach of Vianney’s name. He’s long since lost his fascination, and -since the humble Curé d’Ars is the patron saint of parish priests and priestly vocations- probably feels disinclined to identify at this point in his life.

But I’ve always liked the Curé, even more so for the warm memories of my youngsters being even superficially charmed by him. I like his story and his struggles, his humility and his unshakable faith. Like Fr. Solanus Casey, John Vianney was considered to be awfully “average” by the seminary superstars, and not much to write home about, unless you considered his holiness, in which case, Jean Marie Baptiste Vianney was anything but “average.”

Like another simple priest, St. Pio, Vianney seemed to be able to read souls, and his simplicity, common sense and ability to break through crapola and get to the heart of a matter made him a whale of a confessor; people would travel long ways to spend some time in his confessional:

To accommodate the growing crowds, he slept only three hours, rising after midnight so as to be in his confessional at one a.m. At six or seven, he would celebrate Mass; after a short break for his meager breakfast, he would return to the sacristy for men’s confessions, breaking off at ten to pray the Breviary. Then it was time for the children’s catechism lesson. When this was finished he ate a sparse midday meal, consumed standing, dealt with mail, and visited the sick. Then it was back to the church for women’s confessions until five, when he returned briefly to his rectory, returning to the sacristy for men’s confessions until half-past seven or eight, when he went into the pulpit to lead the rosary and evening devotions. Finally he retired to his bedroom, only to spend a good portion of the night in prayer.

What was his secret? Part of it was his ability to read minds and souls. To a penitent who said he had not confessed for 40 years, Vianney said: “It is 44 years.” A female cousin with whom he had boarded during his studies wondered, while visiting Ars in 1833, whether she could confess to a relative. “At that moment,” she testified later, “someone came to me with a message from him to say that he was waiting for me. I was very much astonished, for he could not see me from where he was. I left Ars filled with wonderful interior joy.”

Similar is the story of a young hunter, François Dorel, who went to Ars with friends, but told them there was no way he would go to confession. He was standing in the square with his dog when the Abbé Vianney passed by. “I wish your soul were in as good shape as your dog,” the priest said. Overwhelmed, the young man wept, and made his confession, during which Vianney told him: “Go to La Trappe.” François Dorel died there as a Trappist monk 30 years later.

A geologist who had not attended Mass since his First Communion went to Ars in 1841 just to please a friend. Once there, his companion insisted that the geologist accompany him to Mass. His eyes met those of Vianney as the priest went to the altar. “I felt overwhelmed,” the man said later. “During the whole of Mass I hid my face in my hands. After Mass I wanted to get out of there. As I was passing the sacristy door, I heard a voice from within saying ‘Out, everybody out.’ A bony hand drew me in. Without thinking what I was saying I began to tell the saintly man the whole story of my life, from my First Communion onwards. While I did so he wept and cried out repeatedly: ‘How good God is! How much he has loved you!'”

I knew a man who had been away from church for 25 years, and when he returned he made a full confession. He told me that his confession “made the priest cry.” I expect it was something like that. Tears of joy for return, gratitude for mercy.

Although the Curé d’Ars was said to be of average wit (and to have a terrible memory), he could manage the startling deep thought:

“The more we pray the more we wish to pray. Like a fish which at first swims on the surface of the water, and afterwards plunges down, and is always going deeper, the soul plunges, dives, and loses itself in the sweetness of conversing with God….The fish swimming in a little rivulet is well off, because it is in its element; but it is still better in the sea. When we pray, we should open our heart to God, like a fish when it sees the wave coming.”

There is a particularly terrific alabaster statue of the Curé in the back of the Basilica of the National Shrine of the Immaculate Conception in Washington, DC. It captures his openness and gravity and there is a warmth about the statue (which is so recognizably him) that you almost feel it would speak to you. I wish I had taken a photo of it, because I cannot find one online. Fr. James Martin, over at America Magazine, uses a photo of a much less inviting statue as he writes an nevertheless inviting piece:

Fr. Vianney was très strict. Then again, like all the saints, Jean was a creature of his time. The strictness that he enjoined on those in his parish was a reflection of his upbringing and the prevailing Catholic piety of the day. But despite his severe condemnations, Fr. Vianney was much beloved in Ars. Most famously, he spent upwards of 12 to 13 hours a day in the confessional. I once mentioned that in a lecture in a large parish and one young man immediately raised his hand and said, “Why, what did he do?” No, I laughed, he was hearing confession. People flocked to him. In Lourdes, outside a building given over to nothing but confessions—heard in a dozen languages–there is a statue not of Mary but of St. Jean Vianney.

When I say Vespers in a little while, I will be sure to ask St. John Vianney, an ordinary parish priest, to pay for all of the parish priests I know -and those I don’t- and that more to join their ranks. Then I will toast him with a cup of Mystic Monk Coffee, made by other priests and religious.

And oh, yeah, Vianney is another incorruptible. I know the bodies are just relics, but sometimes I do wonder if these numerous incorruptible saints are meant to have a purpose on the last day.

Julie at Happy Catholic is looking at a living rosary for priests.

Speaking of priests, and it is the beginning of a year of prayer for the priesthood) Fr. Ricardas Repsys died while trying to save his nephew from drowing; these young men are walking as the aspotles walk and and Cardinal Bertone tells his vocation story.

The Desert Nuns have A Prayer for Priests written by another great priest, John Cardinal O’ Connor

Fr. Steve has Video on Vianney

August 4, 2009 Faith & Science & Albacete
Browse Our Archives
get the latest from
Catholic
Sign up for our newsletter
POPULAR AT PATHEOS Catholic
1