A nice piece by Sister Mary Ann Walsh who recalls being in Denver for the first really huge World Youth Day:

As a reporter in Rome, I had traveled with Pope John Paul II. But sitting on a plane with him was a far cry from organizing media for an event to draw about 2,000 journalists and setting up a structure for TV and radio coverage. Early on, I took my concerns to Tim Russert, enthusiastic Catholic and host of NBC’s Meet the Press. With an analysis reflective of a man used to working within walls of power, he explained how to work with the media. “You own the pope, so you’re in charge,” he said.

Now if you want to be empowered, convince yourself you own the pope. When TV producers would balk at our plans, I would remain calm because, as Russert had assured me, I owned the pope. Russert also offered the help of veteran NBC special events producer Bob Asman, who had just organized the TV pool coverage of the Democratic National Convention in New York City. “We’ll call him the ‘secret missionary for God,’” Russert laughed. Asman so impressed the TV stations in Denver that had formed a consortium to deal with the largest event they’d ever known, that they hired him almost as soon as they met him.

When Catholic youth heard about WYD, they responded in force and surprised the bishops. Youth begged to go to the church event instead of church leaders begging them to go. Bishops who traveled with them found it life changing. It was a booster shot for the shepherds to be surrounded by energetic sheep. Their enthusiasm caught reporters up short. Media geared up for protests, but they never materialized. When one reporter asked a girl about her feelings on birth control and abortion, she told him teen-style, “Get a life!” The days were for prayer, not protest. The Washington Post reported the event was like Woodstock, with all of the good and none of the bad of the 1969 rock concert at a farm in the Catskills.

Read the whole thing. Back then my husband and I were doing a teen ministry in our parish and I remember one of the kids telling us that the press didn’t seem to know what to do with that event. One girl related a story about a reporter trying to get a group of teenagers to say they’d been shipped to the event for effect (we’d call it astroturfing, today, I guess).

It is interesting, isn’t it, how mainstream media’s first questions are always about sex or pelvic issues? I recall Diane Sawyer given the unusual privilege of visiting Poor Clare nuns within their cloister, and her first question was, “so you don’t have sex?” The nuns looked at her and laughed.

Oh, the US media — always leading with the pelvis.

I recall seeing an interview with the chopper pilot who brought JPII into the stadium. He said the energy from the kids and their screams was actually affecting his entry.

Some great WYD images here, including footage from the incredible Denver gathering. 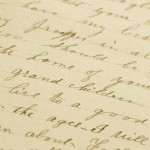 June 27, 2013 Ranting on the Loss of Cursive Writing
Browse Our Archives
get the latest from
Catholic
Sign up for our newsletter
POPULAR AT PATHEOS Catholic
1

Catholic
Hope and Grace; Reports from WYD -UPDATED
The Anchoress

Catholic
Prayer is ruining me for blogging...
The Anchoress
TRENDING AT PATHEOS Catholic