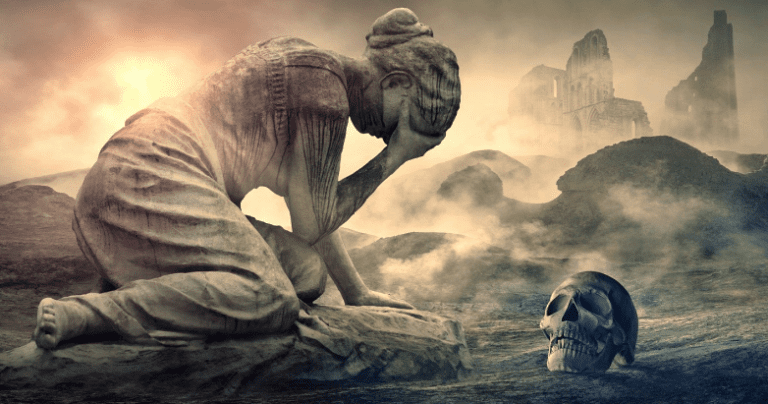 Now this is the noble truth (that the unawakened life) sucks. Rebirth sucks; old age sucks; sickness sucks; death sucks; association with the disliked sucks; separation from the liked sucks; not getting what you want sucks. In brief, (everything) sucks (because of) the grasping of the five (mind-body) processes (SN 56.11 Forrest).

Your greatest joys will fad, your dearest loved ones will die, your favorite things will break, and everyone you know will go away in the end. That is bad enough, but you will have to repeat the whole thing over and over and over again. If fact, you already have. You have been born, gotten sick, grown old, and died millions upon millions of times. The only reason you don’t believe this is that you have forgotten your previous lives.

If you look up dukkha in the Pali-English Dictionary it says, “There is no word in English covering the same ground as Dukkha does in Pali. Our modern words are too specialised, too limited, and usually too strong.” Everybody seems to agree with Bhikkhu Bodhi about dukkha, “The Pali word is often translated as suffering, but it means something deeper than pain and misery. It refers to a basic unsatisfactoriness running through our lives, the lives of all but the enlightened” (Noble Eightfold Path 6). What is strange is that everyone agrees that unsatisfactoriness is better than suffering, yet no one translates it that way.

If I had to produce a translation for publication, I think I would translate this passage this way:

In the article, Leigh Brasington translates our passage as:

I will not rehash my argument for rebirth, see my article entitled The Denial of Rebirth. What I want to do this time arose is show that the idea is not exclusively Eastern.

Benjamin Franklin said, “I look upon death to be as necessary to the constitution as sleep. We shall rise refreshed in the morning.” And, “Finding myself to exist in the world, I believe I shall, in some shape or other always exist.”

Mark Twain said, “I have been born more times than anybody except Krishna.”

Henry Ford said, “I adopted the theory of reincarnation when I was 26. Genius is experience. Some think to seem that it is a gift or talent, but it is the fruit of long experience in many lives.”

Johann Wolfgang von Goethe said, “As long as you are not aware of the continual law of Die and Be Again, you are merely a vague guest on a dark Earth.”

Freidrich Nietzsche said, “Live so that thou mayest desire to live again – that is thy duty – for in any case thou wilt live again!”

Mahatma Gandhi said, “I cannot think of permanent enmity between man and man, and believing as I do in the theory of reincarnation, I live in the hope that if not in this birth, in some other birth I shall be able to hug all of humanity in friendly embrace.”

Ralph Waldo Emerson said, “The soul comes from without into the human body, as into a temporary abode, and it goes out of it anew it passes into other habitations, for the soul is immortal.” And, “It is the secret of the world that all things subsist and do not die, but only retire a little from sight and afterwards return again. Nothing is dead; men feign themselves dead, and endure mock funerals… and there they stand looking out of the window, sound and well, in some strange new disguise.”

Albert Schweitzer said, “Reincarnation contains a most comforting explanation of reality by means of which Indian thought surmounts difficulties which baffle the thinkers of Europe.”

Walt Whitman said, “I know I am deathless. No doubt I have died myself ten thousand times before. I laugh at what you call dissolution, and I know the amplitude of time.”

William Wordsworth said, “Our birth is but a sleep and a forgetting; The Soul that rises with us, our life’s Star, Hath had elsewhere its setting. And cometh from afar.”

Jalalu Rumi said, “I died as a mineral and became a plant, I died as a plant and rose to animal, I died as animal and I was man. Why should I fear? When was I less by dying?”

Carl Jung said, “My life often seemed to me like a story that has no beginning and no end. I had the feeling that I was a historical fragment, an excerpt for which the preceding and succeeding text was missing. I could well imagine that I might have lived in former centuries and there encountered questions I was not yet able to answer; that I had been born again because I had not fulfilled the task given to me.”

Socrates said, “I am confident that there truly is such a thing as living again, that the living spring from the dead, and that the souls of the dead are in existence.”

Jesus Christ said (in Gnostic Gospels: Pistis Sophia), “Souls are poured from one into another of different kinds of bodies of the world.”

Voltaire said, “It is not more surprising to be born twice than once; everything in nature is resurrection.”

Josephus said, “All pure and holy spirits live on in heavenly places, and in course of time they are again sent down to inhabit righteous bodies.”

Arthur Schopenhauer said, “Were an Asiatic to ask me for a definition of Europe, I should be forced to answer him: It is that part of the world which is haunted by the incredible delusion that man was created out of nothing, and that his present birth is his first entrance into life.”

George Harrison said, “Friends are all souls that we’ve known in other lives. We’re drawn to each other. Even if I have only known them a day., it doesn’t matter. I’m not going to wait till I have known them for two years, because anyway, we must have met somewhere before, you know.”

I think it would be good to pause and let me clarify something. In Buddhism, rebirth and reincarnation are not the same things. I know it is in most people’s minds, but it is a misunderstanding. Reincarnation is the teaching that the soul (Sanskrit, Atman) at the death of the body, leaves the body and enters into another body. The Buddha was very clear that there is no such thing as a soul or Atman (MN 22). This means that there is no soul to transmigrate from body to body. Rather, the Buddha taught that we are processes not essences. What happens in rebirth is more like a candle flame. When you use one candle to light another candle, is the new flame the same or different from the first candle? That’s rebirth in Buddhism.

“The Buddha,” writes Bhikkhu Bodhi, “teaches our individual lifespan to be merely a single phase within a series of rebirths that has been proceeding without any discernible beginning in time. This series of rebirths is called samsara, a Pali word which suggests the idea of ‘directionless wandering’” (In the Buddha’s Words 24). I have translated the Pali word samsara as “prison of rebirth.” Here is my translation of this passage, “Practitioners, this prison of rebirth has no known beginning. No starting point is found for the journey of sentient beings through endless rebirths, hindered by ignorance and chained by craving” (SN 15.1 Forrest).

Most Westerns think of reincarnation or rebirth as such a wonderful thing. But this is because people don’t see the big picture. Even the Hindu religious leaders, who viewed reincarnation much more negatively, did not see the full picture. They thought that God was the highest, and that we are splinters of God trying to find our way back to union. But the Buddha was the full picture. “The true nature of Samsara was revealed to him,” writes Eric Cheetham; “the gods did not create it and they did not, could not, control it. Nor was there an unchanging, indestructible essence that transmigrated” (8).

Now this is the noble truth (that the unawakened life) sucks. Rebirth sucks; old age sucks; sickness sucks; death sucks; association with the disliked sucks; separation from the liked sucks; not getting what you want sucks. In brief, (everything) sucks (because of) the grasping of the five (mind-body) processes (SN 56.11 Forrest).

Let me wrap up this cheery article by saying that the unawakened life sucks. But this doesn’t mean there are not happy times. There are, but they never last. Even going to heaven doesn’t last. Everything is impermanent means that everything in conditioned existence is unreliable, changeable, and has no lasting substance. It means that, until we attain Nirvana, we have to see old age, sickness, and death over and over again.

Of course, as unenlightened individuals we cannot “discern an escape.” You have to reach the higher levels of meditation to do that. And so we are stuck either accepting or rejecting the testimony of the Buddha. This is a hard sell to modern men and women who refuse to take anything on faith. But if the Buddha was right about 95 things that we can confirm, can we trust him on the five things we can’t yet confirm?

Rebirth is real and it is not a good thing. Rebirth, old age, sickness, and death sucks (SN 56.11 Forrest). The situation within condition existence is not pretty. “But in its main outline, in its general structure and content, Sakyamuni’s revelation was a valid picture with one overriding addition,” writes Eric Cheetham, “it was far worse than any of the previous speculation and partial views had imagined” (8). It was far worse than you think. Let that sink in. What if the Buddha is right?

Let me end with two quotes.

The Oracle from the Matrix movie, after telling Neo the bad news about the future, says, “Oh, don’t worry about it… As soon as you step outside that door, you’ll start feeling better. You’ll remember you don’t believe in any of this fate crap… you’re in control of your own life… remember?” She holds out a tray of oatmeal cookies to Neo. “Here, take a cookie… I promise, by the time you’re done eating it, you’ll feel right as rain.”

You have a choice.

Morpheus said to Neo: “This is your last chance. After this, there is no turning back….. You take the blue pill, the story ends. You wake up and believe… whatever you want to believe. You take the red pill….. you stay in wonderland… and I show you just how deep the rabbit hole goes.”

Image by Kellepics via Pixabay

September 29, 2020 The Buddha’s First Sermon
Browse Our Archives
get the latest from
The Buddha Said
Sign up for our newsletter
POPULAR AT PATHEOS Buddhist
1

The Buddha’s First Sermon
To understand what is important and foundational to a teacher’s philosophy, it...
view all Buddhist blogs
Copyright 2008-2020, Patheos. All rights reserved.