Human Reason and Its Discontents: A Natural Law Sampler

The selections below illustrate the broad scope and application of natural law philosophy to Christian conservative perspectives on the issues that most divide the United States (and European nations) in this historical moment: a) how we think about and interpret history; b) the legacy and meaning of slavery and racism for national identity; c) migration, borders, empathy, and identity; d) Christianity, capitalism, and socialism; e) free will, self-ownership, and suicide; g) Western civilization as the mirror of God; h) tradition and nostalgia; and i) origins and manifestations of evil.

Human Reason and Its Discontents

The thread uniting these articles is the idea that humans all share an innate capacity to reason that allows each individual, when properly aligned to this rational capacity, to identify that which is true and good in our natures and in our goals, and to pursue those goods in the light of those truths, through virtuous acts that lift us closer to God – the “unchanging principles of conservatism” that Heritage Foundation president Kay Coles James enumerates (The Unchanging Principles of Conservatism Defined).

One of the strengths of natural law philosophy, generally, is its combinatorial power, the flexibility of its key tenets to span and in some measure unite otherwise disparate and contradictory ideologies. For example, libertarians of the Austrian economics persuasion base much of their epistemology on natural law foundations (as articulated by Murray Rothbard), which allows some of their adherents to align themselves with orthodox and traditional Christian precepts (An Answer to the Pope; Reason, Faith, and the Struggle for Western Civilization).

In the lovely post on migration in The New Inquiry, we see an application of the idea of natural law as the essence of the law of sea, in which maximal vulnerability to nature heightens human capacities for empathy and self-sacrifice (Liquid Border). Several authors, with varying degrees of success, enfold Christian natural law into the fabric of the American founding (America Wasn’t Built on Slavery). Other authors invoke natural law from a crouched, snarling, defensive posture that flattens and hardens the term into a cudgel, with an emphasis, on rooting out deviance and evil  (Ghost of John C. Calhoun; A World Without Globalists). Finally, most of these articles ultimately lean into scriptural and creedal foundations that subordinate the chaotic “rationality” of nature itself to the more inscrutable “reasons” of a Creator God.

One implication of this “lean” is the romance and nostalgia attached to rural locations and traditions, and the implication that natural law philosophy and virtues, and a “healthy order” will most “naturally” flourish within interior rural settings where “traditional values” and religious commitments remain central to local communities. By extension, of course, coastal urban centers are more turbulent and chaotic and deviant, more cosmpolitan, more open to “foreign” influence and corruption. In the truly strange article positioning British Catholic convert (and future Catholic saint) G.K. Chesterton as an “Old Dixie” fatboy-fanboy, for example, the author states:

When Chesterton wrote his book What I saw in America, he referred to the Northern Cities of the United States as “forests of brick” and a “labyrinth of lifeless things.” What may seem strange to many contemporary American conservatives is that Chesterton was not surprised to see progressivism, crony capitalism and urbanization running amuck in the Northern portion of the United States, as he saw this as the logical terminus of the apostate Puritan (G.K. Chesterton and Old Dixie).

Of course, Donald Trump’s 2016 election triumph, and the subliminal (and superliminal) discourse of conservatives and the Republican Party, before and since, has exploited the ethnic, racial, and cultural differences embedded within the rural-urban dichotomy. The Creation Project will frequently return to these dualistic (and dueling) pairings: the tension between farm and city, order and disorder, virtue and corruption, simplicity and complexity, and stasis and motion.

The Unchanging Principles of Conservatism Defined (The Daily Signal, August 22, 2019)

The federal government is instituted to protect the rights bestowed on individuals under natural law. It exists to preserve life, liberty, and property—a mission that includes not only protecting the sanctity of life, but defending freedom of speech, religion, the press, and assembly, and the right of individuals to be treated equally and justly under the law, and to enjoy the fruits of their labor.

No, America Wasn’t Built On Slavery, But Faith That All Men Are Created Equal (The Federalist, August 21, 2019)

Slavery was and is an abomination. The ownership of one man over another is an affront to both natural law and our God-given inalienable rights as human beings. It is an evil part of America’s past—as well as that of nearly every nation on earth. The fact that slavery has a universal heritage does not absolve American slave owners, but it does provide a necessary historical context.

[Calhoun] believed instead that politics was the exercise of pure will, and that the scope and exercise of political power should be based on “scientific” principles, not natural law or inherent human rights. In that sense, he has far more in common with the modern-day left and the champions of leftist governance than he does with the GOP. As Jaffa has written, “Calhoun’s denial of natural equality is pro tanto and ipso facto a denial of man’s nature as a free and reasonable being. In this, of course, he anticipates the metaphysical determinism of contemporary behavioral science.”

What a bitter irony, then, that Bouie and the Times have come around to embracing the central tenets of Calhounian thought: that the American Founding was a monstrous lie, that natural law is pure folly, and that the promissory note is worthless.

The laws of the sea are different than those enforced on solid ground; they’re more essential. They apply in the confined space of a boat skimming the waves. The sea doesn’t have foreigners or citizens, illegal immigrants or refugees, just sailors and castaways. The former are obliged by natural law to rescue the latter because, in a mirror-like relation, all those shipwrecked were once sailors, and all sailors could become shipwrecked. This binary logic compels vessels at sea to rescue anyone in peril. All other concerns come second to this obligation. The sea doesn’t have its own laws; that’s why we have the law of the sea, which is both an extreme human attempt to control the dangerous situations in which we may find ourselves and, at the same time, a recognition of our inferiority to this powerful natural element.

An Answer to the Pope, a Leader of Libertarianism’s Critics (American Institute for Economic Research, August 18, 2019)

It is for this reason that the Catholic Church positioned itself against socialism at the very dawn of the idea in the modern world. In 1878, forty years before the Bolshevik Revolution, Pope Leo XIII wrote in Quod Apostolici Muneris that the socialists were plotting to “leave nothing untouched or whole which by both human and divine laws has been wisely decreed for the health and beauty of life.” Above all, he wrote, the socialists were wrong to “assail the right of property sanctioned by natural law; and by a scheme of horrible wickedness, while they seem desirous of caring for the needs and satisfying the desires of all men, they strive to seize and hold in common whatever has been acquired either by title of lawful inheritance, or by labor of brain and hands, or by thrift in one’s mode of life.”

Assisted Suicide: The Ethics, the Laws, and the Dangers (Public Discourse, August 17, 2019)

The clearest moral assessment of suicide arises from the Christian tradition. In his encyclical Evangelium Vitae, “The Gospel of Life,” Pope St. John Paul II reaffirmed the traditional Christian view, saying that “euthanasia is a grave violation of the law of God, since it is the deliberate and morally unacceptable killing of a human person.” He described this teaching as based on natural law, available to any reasoning person, as well as on the written word of God.

Western civilization blossomed as three tectonic strands of thought converged. The Jewish diaspora familiarized the Roman Empire with monotheism and the ethics embodied in the Decalogue. Greek philosophy, which had reasoned its way to an embryonic and incomplete monotheism of its own, taught that an unseen wisdom, or logos, ordered all of creation and allowed the human mind to participate in the transcendent. Philo of Alexandria harmonized these two systems of thought as completely as Scripture and conscience allowed. Finally, Christian universalism taught that all people are children of one God and subject to one standard of truth. Thus, the rational order embedded in natural law revealed, in a rudimentary sense, the character of the Almighty. The notion of a rational God animated theologians, from the Christian Platonists and Augustine to Maimonides. In due time, when the civilization matured, it would have profound meaning for human rights and limited government. The rejection of a God Who is pure will leads to constitutional limits that constrict the arbitrary exercise of power.

Within Christian and conservative circles, the great English writer Gilbert Keith Chesterton (1874-1936) is widely considered one of the most important authors of the Twentieth Century. As a poet, novelist, mystery writer, journalist and Christian apologist Chesterton excelled; presenting a formidable challenge to the encroaching progressivism and secularism to which the greater part of the English speaking world has succumb. In many ways Chesterton embodies the best of the conservatism of Edmund Burke together with the classical liberal democratic ideals of the old English Whigs. Among the pillars of the edifice constructed by Chesterton’s thought are: an emphasis on the classical Natural Law tradition, a tremendous respect for the old Roman Republic and civilization, and a devotion to orthodox/creedal Christianity.

What Would It Take To Build a World Without Globalists? (Alt-Market, August 14, 2019)

If you want to understand what evil is, you have to first have an awareness of natural law and the voice of conscience. Religions have their own guidelines for what constitutes evil, and some of these are valuable, but as religions become centralized and bureaucratic they can be twisted to serve evil purposes. Ultimately, wise people know evil when they see it because they listen to their inner warnings.

Evil seeks to violate every tenet of natural law. It seeks to turn every function of human stability on its head in mockery. It seeks to undermine love, hope, family, safety, and especially freedom. Evil seeks to corrupt or destroy everything in its path. It seeks to gain not through industry and invention but through theft. It seeks to take what it should not have; not only this, but it takes a certain detestable joy in subjugating or torturing the innocent.

August 19, 2019
Agent of Misdirection: John Calipari and the Theatrics of Race, Basketball, and Money
Next Post

August 23, 2019
Browse Our Archives
Related posts from The Creation Project 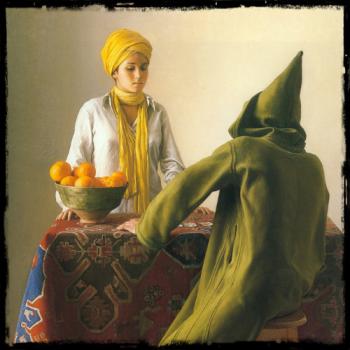