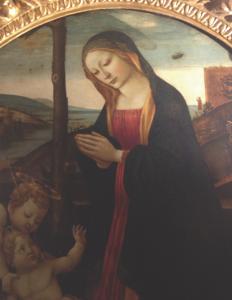 The Catholic Church is well known among scholars of religion for its syncretism, that is, its ability to meld indigenous and local religious practices, as well as gods and goddesses, with its own saints and devotions. Intentional or not, this strategy is successful and there are hundreds of cases of indigenous deities that carry on the tradition of pre-Christian religious practices while being simultaneously fused with Catholic saints. St. Brigid of Ireland is a good example of this process. The Catholic saint shares her name with a pre-Christian Celtic goddess and her feast day marks the Irish celebration of Spring. What would Catholic syncretism look like in an age of mass media? Look no further than the specter of the UFO.

In the last few years I have been struck by the cultural trend that I term the “Biblical-UFO hermeneutic,” but could less formally be called a contemporary form of Christian syncretism. It is the fusing of traditional Catholic events, paintings, and material culture with the belief in UFOs and extraterrestrials. There are many examples of this trend. Recently several of my students who were studying in Italy wrote to me after they had visited the Vatican in Rome, and from Florence. They sent me photographs of several paintings from the Renaissance era. One painting depicted the Italian monk St. Francis receiving the stigmata—the wounds of Christ, on the palms of his hands. In the paintings the wounds of Christ were delivered by an angelic form flying down from the sky and appearing to “zap” Francis with streaming beams of light. My students were convinced that St. Francis was visited by a UFO and that the angel was an extraterrestrial.

My students’, and others’ interpretations are bolstered by popular culture. Television shows like Ancient Aliens presume that extraterrestrials have visited human civilizations and that art and particularly religious art reveal these contact events. As silly as this might seem to historians and art historians, who often point out that the artists of these particular eras are merely using the conventions of their day to convey a sacred event, there is a greater point lost in the controversy. As Carl Jung famously stated in his first and only book about “flying saucers,” we are witnessing the formation of a legend, and a new mythic language that frames aerial phenomenon as extraterrestrial and advanced technology, instead of as angelic beings who are messengers from God. This is no less than a momentous occasion for the study of religion, not to mention religious practice and belief. It reveals a new form of religiosity, the belief in an advanced extraterrestrial species that has been helping humans form civilization and progress through technology. These beliefs and practices are manifested in interpretations of traditional religions that reveal the fusing of technology within traditional religious events.

This development is not only a new form of religious syncretism, it is also unprecedented. New religious movements have generally adopted beliefs and practices, as well as gods and goddesses, from previous religious traditions. This has helped new religions authorize their new practices and carry on traditions that have been familiar to practitioners. UFO religious syncretism is something entirely different, however. The contents of this fusion are not necessarily a god’s creations, like angels or saints, but machines. The specific contours of this new religious form remain to be seen, but one thing is certain. When my students and others view a painting like the Madonna and Child with the Infant St. John” located in the Palazzo Vecchio in Florence, they will notice the strange aerial phenomena floating in the sky above the figures. Many will wonder if it is a UFO. 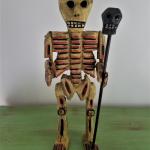 May 17, 2018
From Kitchen Saint to Skeleton Saint Rey Pascual - The Bizarre Case of Pascual Bailon
Next Post 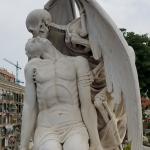 May 29, 2018 The Kiss of Death - Eros and Thanatos in a Barcelona Cemetery
Recent Comments
0 | Leave a Comment
Browse Our Archives
Related posts from The Global Catholic Review