Patheos Explore the world's faith through different perspectives on religion and spirituality! Patheos has the views of the prevalent religions and spiritualities of the world.
Words shouldn’t hurt. I mean, they’re just words.

What’s worse is that some people who know words hurt, like to fling them around like they’re rocks or something.

They carefully pick their target, pick the “right” words and let them fly!

Sadly, as I pointed out in the first post of this series (where I look at two “favorite” Bible verses I don’t care for), Christians who like to quote scripture frequently quote it as if they hold the One True Understanding.

And, almost as frequently, that understanding leaves people out.

Sometimes, quoting scripture is intended to be a weapon – against ideas or people.

Quote flingers run across something that they don’t like, so they just pluck a verse (often out of context), and let it fly!

#3 in my list of “Favorite” Christian Quote Verses I hate (or, at least, hate the way they are used).

“Trust in the Lord with all your heart and lean not on your own understanding.” —Proverbs 3:5 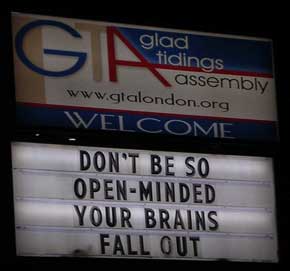 Sadly, this is an uncomfortably common perspective in many conservative and even some mainline churches.

It would seem that thinking for yourself is a threat to faith.

And I suppose it is, really – well, at least a threat to blind faith. You can’t have your minions thinking.

And if they do? What do you do then?

Pick up a piece of scripture and let them have it! May I recommend Proverbs 3:5?

Never mind that verses 13-18 have this to say about wisdom: “Happy is the man who finds wisdom,and the man who gains understanding; for her proceeds are better than the profits of silver,and her gain than fine gold. She is more precious than rubies, and all the things you may desire cannot compare with her. Length of days is in her right hand, in her left hand riches and honor. Her ways are ways of pleasantness, and all her paths are peace. She is a tree of life to those who take hold of her, and happy are all who retain her.”

Oh, and how perfect is it that Wisdom is a woman?! – since nearly every day, it seems right wing evangelicals make more misogynistic attacks on equal rights for women and even against full-grown women’s ability to manage their own bodies.

Ultimately, the use of this verse to support blind faith is an example of quoting a Bible verse designed to be a weapon – this time against ideas.

#4 in my list of “Favorite” Christian Quote Verses I hate (or, at least, hate the way they are used).

“Jesus answered, ‘I am the way and the truth and the life. No one comes to the Father except through me.’” — John 14:6

This is the verse that proves I’m not doing my list in any particular order, because I probably dislike the way this verse is used most of all.

It usually is quoted in a way that reeks of Christian exceptionalism.

It is an example of a Bible verse designed to be used as a weapon agains people – specifically, non-Christians.

I’ve actually written about it before; and here are some of my thoughts.

Usually when it’s quoted, it’s quoted like this: “I am THE way, THE truth and THE life. NO ONE comes to God, but by ME.”

Not infrequently, John 14:6 is accompanied by a look on the quoter’s face similar to one you might see on the face of a person who just victoriously squashed a spider with a rock.

I’m often stymied by this behavior. Not so much because it is a sling-shot score to the forehead of Christian inclusivity, but because it is an interpretation of the verse that requires such a compartmentalized, un-contextualized understanding that I hardly know where to begin to respond.

If I’m in a hurry, I sometimes take the scripture-slinger’s own inclination toward an “it says it right there” style of biblical interpretation and quote John 10:16 to them, “I have other sheep that do not belong to this fold.”

Not infrequently, I accompany it with a mirrored victorious look on my face (similar to one you might see on the face of a person who just victoriously squashed a spider). If I am extremely fortunate, on that note, I can also victoriously rotate on my heel and walk away.

That’s actually how I handle it on a bad day.

On a good day, I’m more apt to take a little time and invite them into some thoughtful reflection on the text.

Here’s the thing (as I pointed out in number 3 above), it turns out some Christians believe thoughtful reflection is hazardous to their faith – or maybe they simply believe thoughtful reflection is the opposite of faith? Either way, if you choose this route of engagement, I suggest you may feel some small degree of fear and trepidation in doing so – or, at least, you may want to proceed with informed caution.

One of the things I mention to folks who want to cherry pick and legalize John 14:6 is that this particular statement made by Jesus is meant for a specific person, in response to a specific question, within a specific setting in the Bible.

I give it a minute to sink in. If the person no longer has the “I squashed a spider!” look on their face, I continue.

Jesus was talking to Thomas.

(On a somewhat related note, you may recall that Thomas is the poor guy who is frequently called “doubting” simply for doing what most reasonable people would do when a dead person says they are not dead. He asked for proof. Basically, he was investigating. Which brings us back to thoughtfully engaging the text).

Jesus was talking to Thomas who, in another act of thoughtful investigation, had asked the question, “Lord, we do not know where you are going. How can we know the way?”

Shame on you Doubting Thomas! How dare you question Jesus! You faithless little… wait. Actually, good question. Yeah Jesus, how do we know the way?

The only people who were there listening were Jesus’ followers, people of “The Way.” At some point, they became known as Christians. For Inquisitive Thomas (the name I give Thomas in response to the unfair “Doubting” label) and for all Christians, Jesus was saying, “Don’t worry. Everything is going to be alright. For you, I am the way. So, when I’m gone, just do the things I’ve been doing and teaching you.”

It is simply impossible for me to read the rest of Jesus’ teachings about love and inclusiveness, and then read John 14:6 and conclude it is about excluding folks.

I can’t hear the guy who picked someone outside the faith, a hated Samaritan, to show us what caring for our neighbor looks like saying, “Samaritans and anyone else who doesn’t worship me can’t know God.”

It just doesn’t add up.

A few verses prior to this, Jesus tells us that there are many, many rooms in God’s house. Taken within the larger teachings of Jesus, it sounds like there is literally room for everyone.

One God. Many rooms. Many paths.

Ultimately, what I’m saying is: stop throwing around Bible verses as if they were stones to hurt people or ideas.

To paraphrase the One who shows us The Way, “let those who are without sin, sling the first verse.”