A Christian Minister’s Rewrite of the RNC’s “Christian” Prayer

There’s been a whole lot of discussion and (rightful) condemning of the opening statement and prayer from Pastor Mark Burns at the Republican National Convention.

To be clear, I’ve played my part in the condemning.

For reference, here is the opening statement and prayer: 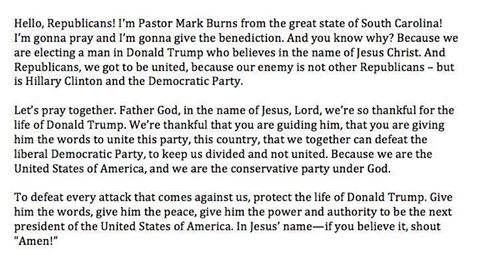 Of particular concern is that statement, “…our enemy is not other Republicans – but is Hillary Clinton and the Democratic Party.””

It is particularly concerning that this is being presented as a Christian prayer when the the reality of Christianity is this: “A new commandment I give to you, that you love one another: just as I have loved you, you also are to love one another.” – Jesus (John 13:34 ESV)

But, I think it will be much more useful and enlightening to provide and alternative statement and prayer based on the one from Pastor Burns.

Hello! I’m Pastor Mark Sandlin from the great state of North Carolina! I’m going to pray and I’m going to give the benediction. And you know why? I suppose it’s because we insist on elevating one religious perspective above another even when the U.S. Constitution suggest we should do otherwise. But, it is important that we stand united – not Republicans, not Democrats, not Independents. It’s important we stand united as citizens of this nation.

So, I humbly invite you, regardless of your political or religious perspective, to join me in this prayer. Good and gracious God, we are thankful for those willing to dedicate themselves to leading this nation. May they be led by wisdom and concern for all citizens. May their decisions serve to bring this nation together rather than further divide it. After all, we are the UNITED States of America, not the Republican or Democratic States of America.

May those elected receive the protection they deserve so that they may remain safe in the face of violence or challenge. May the next President of the United States lead with peace, love, wisdom, and compassion.