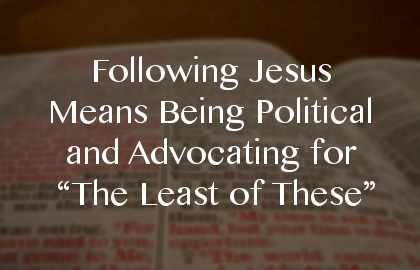 Why did Jesus die on a cross?

To save us from our sins?

Regardless of your personal belief, you have to recognize that within theological circles, the idea that Jesus had to die to atone for our sins is debatable.

What isn’t debatable is why he was crucified.

Jesus was crucified because the Roman authorities of the day saw him as a real threat to the state, a threat to political order and (most importantly), a threat to those in power.

Jesus didn’t end up hanging from a tree for being non-political. In the first century Roman empire, wandering spiritual teachers posed no threat to the state if they weren’t political. But, the things Jesus said and did were very much political – and the Roman government sentenced him to death because of his activity.

American Christians tend to get confused on this point because our country’s founding ideology was based on the separation of church and state (as relative as it may sometimes seem); but many people imagine our modern situation is the same as the religious and political process of Jesus’ day.

It’s important to realize that the primary governing body of Jesus’ time in Judah was not Roman. The Romans frequently left governing to local leaders in the territories they occupied. For Judah, this meant the governing body was the Sanhedrin which was made up of Sadducees and Pharisees.

Yep, the primary governing body of Judah was made up of religious figures. The Sadducees who were primarily wealthy conservatives, and the Pharisees who were more like what we think of as the business class.

Jesus rebuked them frequently, pointing to their hypocrisy and errant interpretations of Hebraic Law. (Matthew 23:27-28)

Jesus was no friend of the religiously and politically powerful. As a matter of fact, in one of the most surprising stories about Jesus (and I would argue the story that most influenced his being given a death sentence), he strikes at one of the most essential elements of the powerful – money.

When Jesus starts flipping the money changers tables in the Temple courtyard, he is striking at a very important source of power for the Sadducees and Pharisees. Jesus denounced that religious elite for turning God’s temple into a “den of thieves” (Mark 11:17) – because that’s what it had become.

Those who were already wealthy were taking advantage of those who had little – some would even be considered “the least of these.” (That may sound oddly familiar to those who follow U.S. politics).

The Sadducees and Pharisees profited outrageously in exchanging Roman money for Jewish currency – which was the only acceptable coinage for buying the animals approved for sacrifice (which the religious leaders also sold at a large profit).

The temple courtyard was surrounded by a wall and, during Passover (which was the timing of Jesus’ table flipping), those walls would have been lined with Roman guards, who were insuring nothing got out of hand during a festival that celebrated the Jewish people escaping another ancient oppressive ruler: the Egyptian Pharaoh.

If you are the occupying Roman government, the last thing you want is the story of the Jewish nation escaping an oppressive ruler to give the commoners any ideas. So, you make your military presence felt.

Jesus walks into the watchful eye of the Roman guards, into the seat and source of power for the local ruling Sadducees and Pharisees, and then he loses it.

He confronts the corrupt system that misuses its power and oppresses those in need. He literally and figuratively begins flipping tables on the powerful. He makes a political statement calling them a “den of thieves.” And he does it all under the watchful eye of armed militants.

It is laughable to say that Jesus wasn’t political.

Jesus confronted the very political structures and people who were twisting and using religion to step on those thought of as “the least of these.”

He confronted the politically powerful Sadducees and Pharisees at every turn, calling out their hypocrisy and distorted use of the Hebraic Law.

And, he then taught what the Law was really meant for: the expressing of Heaven on earth; a place where grace, love and justice were practiced. Not just any justice, the justice of love, of equality, of God.

If you want to follow Jesus, it decidedly means being political.

If you want to follow Jesus, it decidedly means advocating for the “least of these.”

You simply can’t fully follow Jesus if you aren’t willing to be political and stick out your own neck, challenging the hypocritical power structures and leaders on behalf of the oppressed.

March 23, 2015
The Cure for the Unbearable Inadequateness of Being
Next Post

March 31, 2015 God Did Not Kill Jesus on the Cross for Our Sins
Recent Comments
0 | Leave a Comment
Browse Our Archives
Related posts from The God Article with Mark Sandlin