Where Is the Faithful’s Voice in the Synod of Synodality?

Where is the faithful’s voice in the Synod of Synodality?

Recently, I read an alarming interview between EWTN’s Raymond Arroyo and Cardinal Gerhard Müller on The World Over. They discussed The Synod on Synodality. A movement hijacked by dissenting voices within the Church as the true movement of the Holy Spirt with the Church. If true, this represents a real threat to Catholicism in the US, but globally.

In this article, I quote the document National Synthesis of the People of God in the United States of America for the Diocesan Phase of the 2021-2023 Synod. Is the warning of Cardinal Müller accurate or overblown? What does such a document tell us about the state of the Catholic Church in the US? If true, what options do the faithful have to make their voices heard?

They [the framers of the US document] are dreaming of another church that has nothing to do with the Catholic faith … and they want to abuse this process, for shifting the Catholic Church — and not only in other direction, but in the destruction of the Catholic Church. … Nobody can make an absolute shift and substitute the revealed doctrine of the Church, but they have these strange ideas, as doctrine as only a theory of some theologians. [emphasis added]

We must take Cardinal Müller’s warning extremely seriously.  As the former Prefect for the Vatican’s Congregation for the Doctrine of the Faith, Cardinal Müller’s credentials have no match. But let’s not take his word for it. Below, I provide actual quotes from the aforementioned document.

The Most Common Desire

The most common desire named in the synodal consultations was to be a more welcoming Church where all members of the People of God can find accompaniment on the journey. The synodal consultations mentioned several areas where there existed a tension between how to walk with people while remaining faithful to the teachings of the Church, “for many, the perception is that the blanket application of rules and policies is used as a means of wielding power or acting as a gatekeeper.”

As one synodal consultation described, “People noted that the Church seems to prioritize doctrine over people, rules, and regulations over lived reality. People want the Church to be a home for the wounded and broken, not an institution for the perfect. They want the Church to meet people where they are, wherever they are, and walk with them rather than judging them; to build real relationships through care and authenticity, not superiority.” In no particular order, the following groups were frequently mentioned as integral to being a more welcoming Church.

The hope for a welcoming Church expressed itself clearly with the desire to accompany with authenticity LGBTQ+ persons and their families. Many “who identify as LGBTQ+ believe they are condemned by Church teachings.” There is “an urgent need for guidance as [one parish] begged, ‘we believe we are approaching a real crisis in how to minister to the LGBTQ+ community, some of whom are members of our own families. We need help, support, and clarity.’” Often families “feel torn between remaining in the church and supporting their loved ones.” In order to become a more welcoming Church there is a deep need for ongoing discernment of the whole Church on how best to accompany our LGBTQ+ brothers and sisters.

Nearly all synodal consultations shared a deep appreciation for the powerful impact of women religious who have consistently led the way in carrying out the mission of the Church. Likewise, there was recognition for the centrality of women’s unparalleled contributions to the life of the Church, particularly in local communities. There was a desire for stronger leadership, discernment, and decision-making roles for women – both lay and religious – in their parishes and communities: “people mentioned a variety of ways in which women could exercise leadership, including preaching and ordination as deacon or priest. Ordination for women emerged not primarily as a solution to the problem of the priest shortage, but as a matter of justice.”

To What End? Vatican III?

Moreover, Raymond Arroyo asked the Cardinal his sense of the end game for the Synod of Synodility. Arroyo pointedly asked if a potential Vatican III looms on the horizon. Cardinal Müller affirms this direction:

Yes, it certainly is. It is very astonishing, that it is allowed under the authority, in this context, of the Vatican. And it gives the impression that it is really possible that the Church [can change] … [that the synod organizers] are authorized to be the audience of the Holy Spirit, and the Holy Spirit is only a function for them. … It has nothing to do with the Holy Spirit, who reveals himself as the Father and Son and the Holy Spirit … and this is a way to undermine the Catholic faith and Catholic Church.

Therefore, by claiming they speak for the Holy Spirit, the impression of changeability is given. Hopefully, clearer minds at the Vatican emerge to correct this error. But what of the faithful who live according to the teachings of the Church? What of the ones who remain faithful, whose voices seems silent in the National Synthesis of the People of God in the United States of America for the Diocesan Phase of the 2021-2023 Synod? Does this document reflect the real US Church?

Moreover, not one of the 700,000 participants reflected agreement with official Church teaching on human sexuality and women’s ordination. I find this hard to believe. I hope you do, too.

The Voice of the Faithful in the Synod of Synodality

Please join me in a new movement of the faithful. I started a Facebook group to provide up-to-date information on the Synod of Synodality. This group provides an outlet for the faithful to voice their support of official Catholic Teaching. See below for a link to the group. Tell your faithful Catholic friends. Let us not remain silent. Let us use our voices to resist the attempt to hijack the Synod of Synodility. Please join me today! 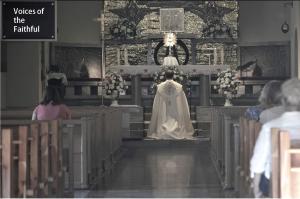 October 24, 2022 Allow Me to Introduce You to the Episcopal Church
Recent Comments
0 | Leave a Comment
Browse Our Archives
Related posts from The Latin Right

Catholic
In the Darkness, the Diocese of Des Moines...
The Latin Right