When Plans Change (Reading and Living with Saint Ignatius)

When you attend a Jesuit college, you become fluent in the various labels that come with the Higher Ed branding of Catholic colleges: the Jesuits are contemplative, educated, devoted to service of others, and, perhaps above all, worldly. One could even call them un-parochial. Indeed, many Catholics who find themselves in a Jesuit institution after a parochial school can’t help but notice a shift. Still, that’s besides the point. Jesuit schools, good at basketball, strong in service, and always looking outward, are great ambassadors of the faith. They enrage ultra-conservative Catholics but they bring new members into the fold and show that, yes, the church is cosmopolitan, multi-national, service-driven, highly-educated, and compassionate. All important reminders in our era.

Yet the life of Saint Ignatius, as we celebrate his feast day today, reminds us of other gifts of our faith. Jesuits often speak of and celebrate “indifference”–not the same as not caring. Indifference is a sense of abandoning our own plans for those of God. To give ourselves up to a greater mission and to let ourselves be taken where we’re needed.

So we think today of the soldier wounded in battle facing a convalescence that becomes a spiritual awakening. The sword is put away and the Latin grammar picked up. The Basque region is abandoned for Paris. He invents a new life with people he’d never met in a language he originally couldn’t read.

Indifference is a tall order for those of us with families and children. How can we be open to new pathways with children to nurture, spouses to support, and homes to keep together? Indifference can mean for us a sort of detachment from the world, not from those we love. We can be responsible and fearless, prudent and open to radical change.

So many of us in this world and in this moment are finding our lives taking directions that surprise us. We may be tempted to believe that after one’s twenties, there is only a straight linear path. We can believe it’s too late. Ignatius was in his 30s when he went through his conversion and in his 40s when he established the Society of Jesus. He was in his 50s by the time the Spiritual Exercises was published and in his 60s by the time he established the Jesuit Constitutions, a set of guidelines for the order. Nearly half of his life was spent pursuing a completely different self, a soldier not a saint.

I found myself watching the film Faces Places by Agnès Varda, my favorite French director. In it, she pairs withs a younger quite famous French photographers, JR. He is 33 and she is 88. Together, they engage in passionate art-making that brings them into the lives of everyday French people living in extraordinary and beautiful circumstances. The Spiritual Exercises are meant to help us see how the spiritual life is a sort of labor, it is something we work at and never quite master. At 33 or 88, we are still striving to create, dealing with change, looking to the next challenge, the opportunity that will change everything.

You can be detached and vigilant. Hopeful and patient. Grateful and uncertain. Ignatius, the global, learned saint, was a Latin-less young man with a shattered leg meditating on the circumstances of this disaster. He found an answer that made him change everything, not overnight, but after over a decade of study and prayer. Ignatius may be the patron saint of soldiers, but let him be for us the patron saint of hope and patience, of the changes that shape us. 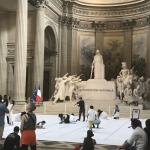 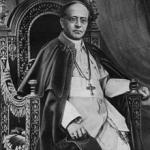