Welcome to the Tuesday Muse, News & Reviews, a new quasi weekly feature on my blog! This will basically be a place where I’ll review some bits and bobs of media, or share some news, or just muse on whatever is on my mind that is clogged with all kinds of media.

There is a LOT to cover right now, as I have been playing catch-up with all the great stuff I have been reading, listening to, watching and being exposed to. So this first installment might just end up having several parts, in rapid succession through the week.

First: The death of English musician John Renbourn at age 70 was a major news story this week. (A very fine appreciation piece appeared in The Guardian this week as well) This uniquely-talented guitarist was one of the original founding members of the popular 70s folk-rock-jazz band Pentangle, and produced some incredible albums over the years. One of them, his 1970 solo album The Lady and the Unicorn, contained elaborate yet earthy arrangements of medieval and traditional tunes, enchanting and dreamy, lively and mesmerizing. The instrumentation is remarkably authentic and otherworldly, with a great group of musicians gathered to play these songs.

The album became a favorite of many pagans for its evocative sound. My coven used some of this music for its ritual music for many years. You can listen to the album in its entirety here. (The link was devoid of ads when I first found it, but given how popular the link has been this week, now you have to listen to fifteen seconds of advertising. It is well worth it!) I own this album on vinyl and used to play it in very heavy rotation. It is sad to think this talented artist is no longer with us; in fact he died while preparing to play at a gig. May we all depart this world, ready to do what we love best and are good at…

April 5, 2015 The TWIN PEAKS reboot will not include David Lynch
Recent Comments
0 | Leave a Comment
Browse Our Archives
get the latest from
Pagan
Sign up for our newsletter
POPULAR AT PATHEOS Pagan
1

No, That's Not An Odal Rune
The Zen Pagan
Related posts from The Witching Hour 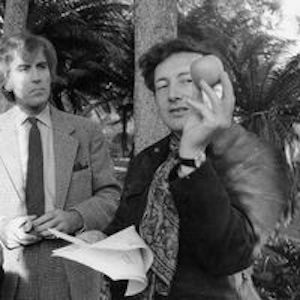