If you’re unable to speak in love… 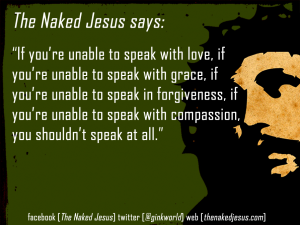 When we speak, our goal should be to speak words that up-lift the heart; we should speak with a voice that expresses grace, with our arms open wide with compassion. This is echoed in the words Paul wrote in the Collective Narrative with his letter to the Ephesians, “Let no unwholesome word proceed from your mouth, but only such a word as is good for edification according to the need of the moment, so that it will give grace to those who hear.” Too many have taken this to mean we can’t “cuss.” That is not what the Greek shares, kind of:

What I would like to do is look at the Greek and share with you another possible translation. I would like to look at several words, Sapros, [saprov] Oikodome [oikodomhn], Agathos [agaqov], Charis [xreiav], and Pas [pav].

So, if we take look at the passage from the Letter to the Ephesians, we can get:

“Together, let’s not speak worn out, unfit word to others. Let the words we speak build happiness and help others grow. Joyful, happy, useful words bringing sweetness, delight, and joy to the hearts of those who hear our words. Words that lift people up the moment they need to be lifted, so they hear the love and grace of our God.”

Speaking in love means we don’t say anything that is defeating, or harmful to another. Our words should lift people up, encourage them, and help them on their path with the Divine. It is easy, though I will not say it is natural, to find the faults in others, but we should not. If you are unable to say anything positive, you should not say anything.

February 9, 2016
If you love someone, set them free
Next Post